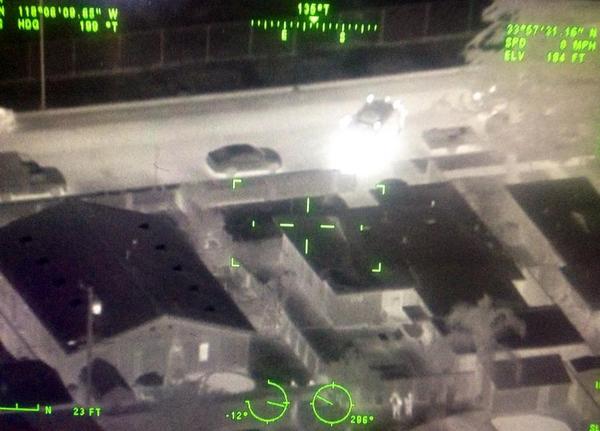 PICO RIVERA >> Deputies subdued and arrested a psychologically troubled man following a six-hour standoff early Saturday after he shot passers-by with a crossbow in Pico Rivera, authorities said.
A SWAT team ultimately arrested Armando Marron, 48, of Pico Rivera on suspicion of assault with a deadly weapon and drug possession, Los Angeles County sheriff’s Lt. Alex Villanueva said.
Deputies first responded about 10:45 p.m. Friday to reports of an assault in the 8500 block of Hasty Avenue, Los Angeles County sheriff’s Sgt. Scott Chapman said.
They encountered a 23-year-old Pico Rivera man who had been shot in the leg with a crossbow, Villanueva said. The victim was accompanied by a second young man who was not injured.
Marron also allegedly fired his crossbow at another nearby home with people gathered in the front yard, the lieutenant said. No one in the yard was struck.
No argument or exchange of words preceded the seemingly unprovoked attack, sheriff’s officials said. The wounded man and his companion were merely passing by when the attack occurred. At least one of the young men was riding a skateboard.
Paramedics treated the wounded man at the scene and removed the arrow from his leg, Chapman said. He declined to be taken to a hospital.
Deputies learned the attacker was inside his nearby home, Chapman said. Deputies ordered the occupants out of the house.
Two relatives of the suspect emerged from the home and told deputies that Marron was still inside, Chapman said. The relatives also told officials that the man had a history of psychological problems, off his medication and potentially violent.
A SWAT team was summoned to take over the situation, and a stand-off ensued for about six hours, officials said.
Deputies fired tear gas into the home about 5 a.m., and the suspect ultimately came out, Chapman said. But he continued refusing to surrender.
Officials used a less-lethal projectile and a K-9 to subdue the man, who was taken to a hospital for treatment prior to booking, Chapman said.
Deputies recovered a crossbow, arrows and a small amount of a substance believed to be methamphetamine from the suspect’s home, Chapman said.
Deputies have had more than a dozen past encounters with Marron in connection with calls such as disturbances, officials said.
According to county booking records, Marron was being held in lieu of $30,000 bail pending a scheduled arraignment Tuesday in Downey Superior Court.