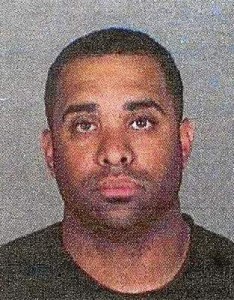 ALHAMBRA >> A judge sentenced a Chino man to 374 years to life in prison Thursday for a spree of follow-home robberies targeting lone Asian women throughout the San Gabriel Valley in 2011, officials said.
An Alhambra Superior Court convicted Jose Lewis Avila, 33, of nine counts of robbery, one count of assault with a deadly weapon, one count of dissuading a witness from reporting a crime and one count of child abuse. The 12 charges stem from a eight incidents in March and April of 2011, investigators said.
Three robberies, one of which involved two victims, occurred in Alhambra, officials said. Three of he robberies occurred in San Gabriel, one occurred in Arcadia and one took place in Monterey Park.
“The defendant targeted women driving alone,” according to the district attorney’s office statement. “Once the victims arrived at their homes, Avila accosted them and demanded their money and property. During each robbery, the defendant used a BB gun and covered his face with a bandana or mask.
But detectives managed to identify Avila the culprit in the crimes through surveillance video and credit card charges, officials said.
Additionally, Avila’s “unique” and “pretty” eyes helped victims point him out as their attacker, said Deputy District Attorney David Ayvazian, who prosecuted the case with Deputy District Attorney Gabriel Kim.
Avila was convicted of a similar string of crimes in 2005, Ayvazian said.
The assault with a deadly weapon charge was the result of Avila shooting one of his victims in the face with a BB gun during a robbery in Arcadia, officials said. He also threatened a witness not to contact the police, leading to the charge of dissuading a witness. And one of the robbery victims was holding a child in her arms during the crime, resulting in the charge of child abuse.
According to district attorney’s officials, the jury also found true special allegations that Avila used a deadly and dangerous weapon, the BB gun, in his crimes, and that he inflicted great bodily injury.

PHOTO of Jose Avila, 33, of Chino, courtesy of the Alhambra Police Department.