AZUSA >> A hit-and-run driver struck and badly injured a man in an Azusa crosswalk early Thursday, police said.
The 28-year-old victim suffered serious injuries in the 12:23 a.m. hit-and-run on Irwindale Avenue, just north of McKinley Avenue, Azusa police Sgt. Xavier Torres said in a written statement. He was hospitalized in “guarded” condition, the sergeant said.
The man was crossing Irwindale Avenue inside a crosswalk when he was struck, police said.
“A vehicle traveling northbound on Irwindale Avenue struck the pedestrian without slowing down or stopping,” Torres said. “It was last seen northbound on Irwindale Avenue.”
The car involved in the collision remained at-large Thursday afternoon, Azusa police officials said. It was initially described as a dark-colored or tan BMW or Mercedes-Benz sedan with a possibly cracked or broken windshield and damage to the front, right portion.
Anyone with information was asked to contact Azusa police Sgt. Randy Schmidt at 626-812-3210, or the Azusa Police Department at 626-812-3241. 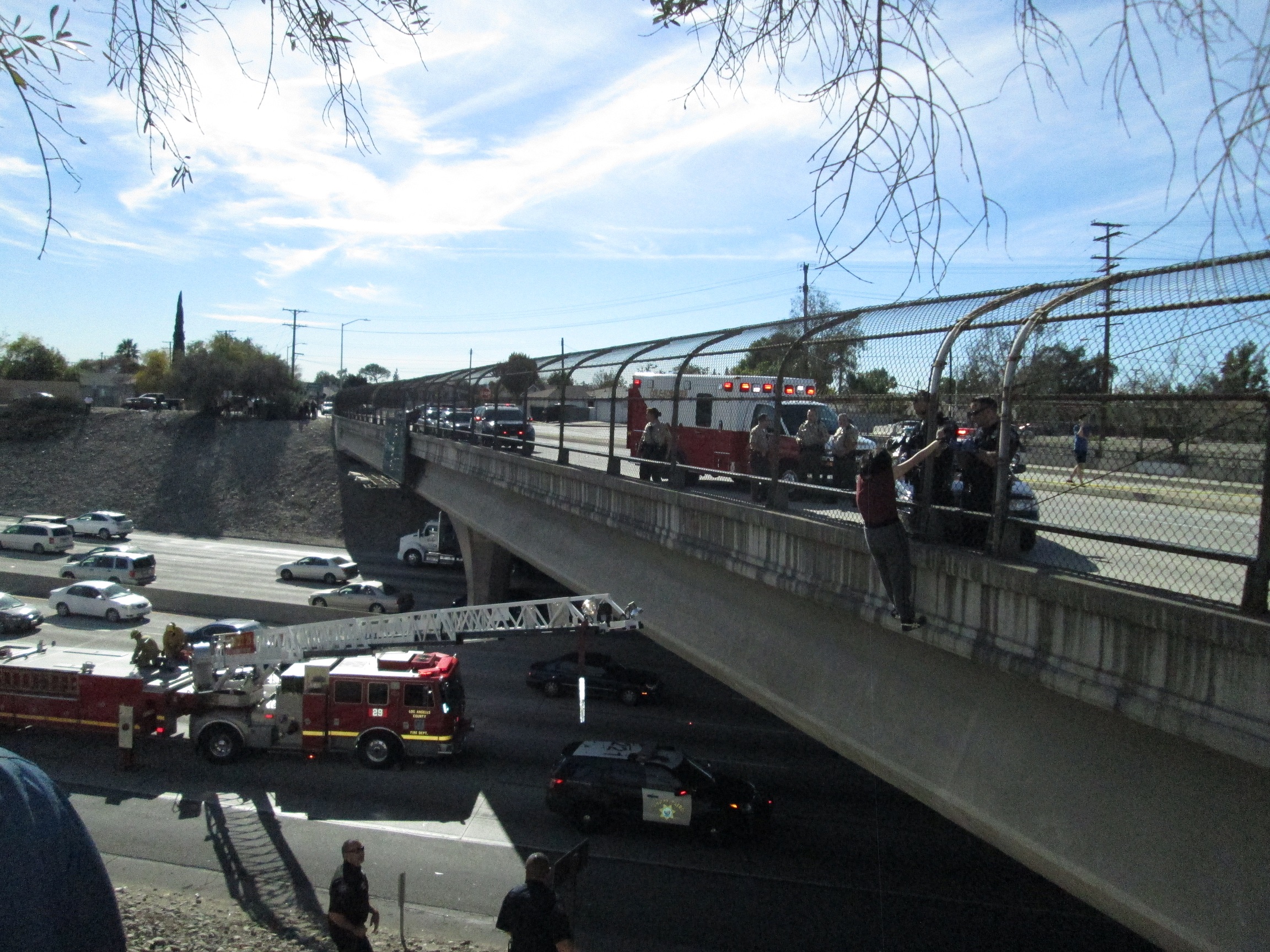 AZUSA >> Police and a good Samaritan rescued a suicidal woman found dangling from an overpass of the 210 Freeway in Azusa Thursday afternoon, officials said.
The incident unfolded shortly after 12:30 p.m. at the Vernon Avenue overpass, according to California Highway Patrol and Azusa police officials.
Police responding to reports of the possible jumper encountered an Azusa woman in her 20s, who was threatening to jump, Azusa police Sgt. Andy Sutcliffe said.
The woman was outside of a chain link safety fence, he said. A man who saw the woman up on the overpass had used his belt to tie one of her hands to the fence so she would not plummet onto the freeway.
“A good Samaritan attempted to secure one of her wrists to the fence using a leather pants belt,” Sutcliffe said.
“While standing on the overpass, Azusa officers handcuffed both of the victims wrists to the fence which prevented her from falling,” the sergeant said.
Firefighters then used a ladder to help bring the woman down.
Officials took the troubled woman for psychiatric evaluation, Sutcliffe said.
Authorities shut down the three right lanes of the westbound 210 Freeway for just over 10 minutes, CHP Officer Jennifer Cassidy said.
The incident caused a significant backup for both directions of the 210 Freeway.

PASADENA >> A 26-year-old man faces a sentence of life in prison without the possibility of parole at his sentencing next month after Pasadena jury convicted him of the fatal stabbing of a Pasadena barbershop owner in 2011, authorities said.
At his second trial following a hung jury and mistrial in September, a Pasadena Superior Court jury found Davon Westley Moore of Los Angeles guilty of first-degree murder for the Sept. 21, 2011, slaying of 43-year-old King E. King, Los Angeles County District Attorney’s officials said.
King was found about 12:30 a.m., lying in a pool of blood behind his barbershop, King King’s Barber and Beauty Salon, in the 900 block of East Washington Boulevard in Pasadena.
The stabbing, which police characterized as brutal, stemmed from robbery and burglary at the shop, according to district attorney’s officials and Pasadena police investigators.
King didn’t go without a struggle, Pasadena police Lt. Tracey Ibarra said.
“He was fighting to survive this attack,” she said.
In addition to first-degree murder, the Jury also found true the special circumstances of murder during a robbery and murder during a burglary, prosecutors said.
Moore is expected to receive a sentence of life in prison without the possibility of parole when he returns to court for sentencing Dec. 9, district attorney’s officials said.
Moore’s co-defendant, 22-year-old Sabrina Octavia King of Compton, who was not related to the victim, pleaded “no contest” to charges of voluntary manslaughter and robbery in March, officials said. She faces up to 21 years in state prison when she returns to court for sentencing,
A previous trial for Moore in September ended in a mistrial, with jurors hung 11-1 in favor of convicting Moore.

PASADENA >> Firefighters rescued three football fans late Saturday after they tumbled into a dry flood-control channel in the parking lot of the Rose Bowl just after the USC vs. UCLA game, officials said.
The two women and one man, who estimated to be in their 20s, suffered “minor to moderate” injuries in the mishap, which took place about 9:15 p.m. in parking lot 7 of the stadium, 1001 Rose Bowl Drive, Pasadena Fire Department spokeswoman Lisa Derderian said.
The three had just left the stadium, where UCLA defeated rival USC 38-20 in an anticipated game that came to an end shortly before 8:30 p.m.
They had been walking along the channel when they slipped and fell in, tumbling about 20 feet down a steep slope into the concrete channel, officials said.
Paramedics took the two women and man to an area hospital for treatment.

PASADENA >> Two robbers held up a Lake Avenue market at gunpoint late Saturday, Pasadena police officials said.
The 7:40 p.m. robbery unfolded at a market in the 1500 block of North Lake Avenue, Pasadena police Lt. Vasken Gourdikian said.
One of the two robbers was armed with a handgun and pointed it at the clerk, a 55-year-old man, while demanding money, the lieutenant said. They fled on foot after receiving an undisclosed amount of cash from the store’s register.
Police described the robbers as two black men, both between 19 and 25 years old, about 5 feet 10 inches tall and of thin build.
The clerk was not injured during the crime, unlike a worker at another Pasadena store who was shot and wounded during a robbery Friday evening.
In Friday’s 7 p.m. robbery at Pepe’s Video & Wireless, less than two miles away at 313 E. Orange Grove Blvd., a man in his 50s who was working as an attendant suffered a gunshot wound to his shoulder while two men robbed the business, Lt. Ed Calatayud said. No other injuries were reported.
The robbers in the Orange Grove Boulevard crime were described as two black men wearing all black clothing. One was about 300 pounds, while the other was thin, police said.
It was not clear Sunday if there was a connection between the two armed robberies.

SAN DIMAS >> Deputies jailed two men early Saturday for allegedly burglarizing a residential garage in San Dimas, officials said.
Officials ultimately arrested Alex Powell of Altadena and Briley Lambert of Covina, both 18, on suspicion of residential burglary following the 3:40 p.m. crime in the 1600 block of Via Alegre, officials from the Los Angeles County Sheriff’s San Dimas Station said.
A resident called deputies to report someone was inside the garage, officials said. Two men were seen leaving the garage, which the resident had accidentally left open, before deputies arrived.
Deputies found Powell hiding nearby, sheriff’s officials said in a written statement.
“Upon checking the location he was hiding, they recovered items stolen from the garage. In addition, he had a checkbook in his pocket that was stolen from an unlocked vehicle on Via Esperanza,” according to the sheriff’s statement.
About two hours after the initial report of a break-in, deputies found and arrested Lambert in the same area in connection with the burglary, according to officials and county booking records. He was allegedly found with items taken from the Via Alegre garage.
Lambert was also being sought by another local police agency, who had previously found his fingerprints at the scene of a residential burglary, sheriff’s officials said.
According to county booking records, Powell and Briley were being held in lieu of $50,000 bail each pending their initial court appearances, scheduled Tuesday in Pomona Superior Court.

PASADENA >> A man lost his bicycle in a knifepoint robbery late Friday, police said.
The crime took place about 11 p.m. at Orange Grove Boulevard and Marengo Avenue, Pasadena police Lt. Ed Calatayud said.
A 31-year-old local man was riding his bike when a car pulled in front of him, forcing him to stop, the lieutenant said.
A passenger exited the car, brandished a knife and demanded the man’s bike, Calatayud said.
The victim complied, and the suspect fled in the car with the bicycle and a driver.
A detailed suspect description was not available.

WALNUT >> Investigators reached out to the public Friday for information into a fatal crash in Walnut last week believed to have occurred during an illegal street race, authorities said.
The crash took place about 6 p.m. on Nov. 13 at Amar Road, just east of Alta Sierra Road, Los Angeles County sheriff’s Investigator Paul Alaniz said in a written statement.
A Honda believed to have been racing another car collided with a third car before slamming into a stationary object, Lt. Frank Rivera said. The impact through the Honda driver from his vehicle. The car believed to be racing the Honda continued driving.
Officials rushed a badly injured Honda driver to Los Angeles County-USC Medical Center, where he succumbed to his injuries Sunday, officials said. His name was not available Friday.
The driver of the car struck by the Honda suffered only minor injuries, Rivera said.
Deputies were told by witnesses that the Honda appeared to have been racing another car when the crash took place, officials said.
“The vehicle was described as a black Acura Integra, or possible a 1990s Honda Civic, two-door,” Alaniz said.
Anyone with information was asked to contact Investigator Alaniz at 909-595-2264. Tips may also be submitted anonymously to L.A. Regional Crime Stoppers at 800-222-8477.

PASADENA >> A convenience store clerk is recovering from a gunshot wound this weekend as police continued seeking two men who shot him during a robbery late Friday.
The clerk, a man in his 50s, suffered a gunshot wound to his shoulder and was hospitalized in stable condition following the 7 p.m. crime at Pepe’s Video & Wireless, 313 E. Orange Grove Blvd., Pasadena police officials said.
He had been released from a hospital by Saturday morning, Lt. Ed Calatayud said.
“(Two robbers) entered the store and attempted to rob the location,” Pasadena police Lt. Art Chute said. “A clerk intervened, one gunshot was fired.”
No other employees or customers were hurt, Chute said.
The robbers fled with an undisclosed amount of cash, Calatayud said.
Officials described the gunman as a black man of about 300 pounds wearing all black clothing. His accomplice was described as a black man of thin build, also wearing all black clothing. No getaway car was seen.
Police shut down Orange Grove Boulevard between Los Robles and Marengo Avenues for more than an hour as they investigated the scene.

TEMPLE CITY >> A gunman shot up a man’s car as he was stopped at a red light along Baldwin Avenue in Temple City early Thursday, officials said.
The shooting took place about midnight along Baldwin Avenue as the victim was heading north, approaching Bogue Street, Los Angeles County sheriff’s Sgt. Abi Ben-Sahile said. But the crime was not reported until six or seven hours later.
Ben-Sahile said the victim, a man in his early-20s, told deputies he did not see the shooter, and initially thought someone was throwing rocks at his car.
But the man later realized bullets had struck both the front and rear of his car, the sergeant said.
The motive in the shooting was unclear.