WHITTIER >> Whittier police are planning a sobriety and driver’s license checkpoint Friday night, officials said.
The checkpoint will be held from 7:30 p.m. Friday to 3 a.m. Saturday at an undisclosed location within the city, Whittier police officials said in a written statement.
“Over the course of the past three years, DUI collisions have claimed three lives and resulted in 135 injury crashes harming 188 of our friends and neighbors,” according to Sgt. David Elizarraras.
Funding for the checkpoint is being provided by a grant from the California Office of Traffic Safety, through the National Highway Traffic Safety Administration.

PASADENA >> Police have arrested two suspects after a group of five males chased two other men with baseball bat and stole one of the victim’s cell phones Wednesday night.
At about 9:40 p.m., two black males were approached by five male Latino suspects, one of whom carried a baseball bat, in the area of Orange Grove Boulevard and Garfield Avenue, said Pasadena police Lt. Terysa Rojas. The victims began to run away and were chased by the suspects to the area of Orange Grove and Los Robles Avenue, where they were assaulted by the suspects, Rojas said.
During the assault, one of the victim’s cell phones was stolen and both suffered bruising to their foreheads, Rojas said.
Both victims, a 25-year-old Pasadena man and a 27-year-old Pasadena man, were treated for minor injuries at a local hospital, Lt. John Luna said.
Soon after the alleged crime, a police helicopter spotted two of the suspects nearby, and officers detained them, Rojas said.
Police recovered the cell phone but were unable to locate the baseball bat and the three other suspects.
After being positively identified as two of the attackers, Arturo Chavolla, 18, of Apple Valley and Felipe Carranza, 25, of Pasadena were booked on suspicion of armed robbery, according to police and county booking records. The two are being held in lieu of a $50,000 bail pending their initial court appearances.
Rojas added that police believe the crime was believed to be gang related.

— By Stephanie Baer and Brian Day

INDUSTRY >> A knife-wielding robber fled with cash after robbing an Industry gas station late Wednesday in the second similar crime at the same business this month, officials said.
Wednesday’s crime took place just after 8:10 p.m. at a 76 gas station at Hacienda and Valley boulevards, Los Angeles County sheriff’s Lt. Raymond Enriquez said.
A man armed with a knife, described as possibly a box-cutter, entered the store and pushed an employee out of his way, the lieutenant said. A second employee was also present.
The robber helped himself to the money inside the cash register, ultimately taking about $300, Enriquez said. He fled the area on a bicycle he had parked behind the gas station.
No injuries were reported. Deputies described the robber as Latino, about 50 years old, 5 feet 4 inches tall and 160 pounds. He wore a green jacket, a blue plaid shirt and blue jeans. The robber also wore a trash bag on his head like a hat.
A similar crime took place at the same business on Feb. 16, and deputies suspect the same culprit is responsible, Enriquez said.
In that case, a man entered the store and helped himself to cash from the register, Enriquez said. The thief did not confront any employees during the first crime.

GLENDORA >> An apparently sick and distressed coyote is expected to be euthanized after it fatally attacked a pet cat in a Glendora neighborhood Wednesday, police said.
The coyote attacked the cat about 3:30 p.m. in the 400 block of W. Kirkwall Road, Glendora police officials said in a written statement. The cat died, and officials notified the owner.
A witness chased after the coyote as it ran into the garage of a home a few blocks away, police said.
California Department of Fish and Wildlife officials Inland Valley Humane Society officials responded to the scene found the coyote still inside the garage, officials said.
Fish and Wildlife officials hazed the animal out of the garage before Inland Valley Humane Society officials captured it down the street, according to Fish and Wildlife spokeswoman Janice Mackey.
“Based on established policies, procedures and the facts of this particular incident, the animal was trapped and will be humanely euthanized as required by law,” the police statement said.

PASADENA >> Police are planning to check drivers for sobriety and valid licenses during a checkpoint Friday night, officials said.
The checkpoint will take place from 7 p.m. Friday to 3 a.m. Saturday at an undisclosed location with Pasadena, Pasadena police Lt. Pete Hettema said in a written statement
“Over the course of the past three years, DUI collisions have claimed 6 lives and resulted in 84 injury crashes harming 125 of our friends and neighbors,” Police Chief Phillip Sanchez said.
Funding for the operation is being provided by a grant from the California Office of Traffic Safety, through the National Highway Traffic Safety Administration.

MONTEREY PARK >> Coroner’s officials have released the name of a 33-year-old Maywood man who died in a fiery two-car crash last week.
Sergio Ramos Horta died at the scene of the crash, which occurred about 5:40 a.m. on Feb. 16 on the eastbound 60 Freeway, just west of Atlantic Boulevard, Los Angeles County Department of Coroner Investigator Kristy McCracken said.
His identification was delayed due to the burned condition of his body, coroner’s officials said.
Few details regarding the circumstances of the crash have been released.
California Highway Patrol officials responded to numerous 9-1-1 calls reporting a crash between a 2003 Infiniti and a 1982 Toyota, “with both vehicles fully engulfed in flames,” CHP officials said in a written statement.
The cause of the crash was under investigation by the CHP’s East Los Angeles office.

LA PUENTE >> The community is invited to join sheriff’s officials for a conversation regarding La Puente’s gang injunction next week.
The community meeting will take place from 7 p.m. to 9 p.m. March 5 at the La Puente Community Center, 501 Glendora Ave., according to Los Angeles County sheriff’s Lt. Pete Cacheiro.
The permanent civil injunction targeting gang members and gang-related activity has been in place since 2011. It is meant to curb the activities of the local street gangs Puente 13 and Bassett Grande. Deputies have described the injunction as a valuable tool in combating gang crime.
Members of the sheriff’s gang task force, known as Operation Safe Streets, will be on hand to discuss the injunction, along with the La Puente Special Assignment Tem and Los Angeles County Deputy District Attorney Michael Fern of the D.A.’s Hardcore Gang Division, Cacheiro said. And crime analyst Henry Gil will provide statistics regarding the gang injunction and its impact on crime.
In addition to La Puente, the injunction also covers a portion of West Covina and nearby unincorporated county area such as Valinda and Bassett.
For more information, contact Deputy Viviana Marez at 626-934-3303, or email vcmarez@lasd.org.

PASADENA >> Officials on Wednesday postponed the arraignment hearing for a man accused of stabbing and beating his grandmother at the family home in Altadena last week as the court examines whether the 22-year-old suspect is mentally competent to stand trial, officials said.
Alexander Touloudjian is accused of repeatedly stabbing his 77-year-old grandmother and striking her in the head with an ax handle late Friday at the home they share in the 1700 block of North Allen Avenue, Los Angeles County sheriff’s officials said. The woman suffered major injuries but was expected to survive. A motive in the attack was not known.
Touloudjian appeared in Pasadena Superior Court Wednesday to answer to a charge of attempted murder, Los Angeles County District Attorney’s Office spokeswoman Sarah Ardalani said. He is also accused of the special allegations that his victim suffered great bodily injury, and that he personally used a deadly weapon in the crime.
But the suspect entered no plea, court officials said. Instead, the defense declared there was a doubt as to Touloudjian’s mental competency to stand trial.
A mental competency hearing was scheduled for March 25 at the Mental Health Courthouse, officials said.
Initially held in lieu of $30,000 bail, Touloudjian’s bail was increased Wednesday to $1.07 million, according to court officials and county booking records. 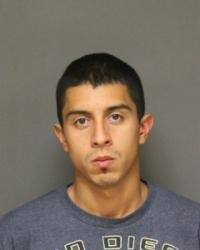 FULLERTON >> Police jailed a La Habra man Tuesday in connection with the sexual batteries of at least seven women in recent months near California State University, Fullerton, officials said.
Investigators arrested Jose Alfredo Gradilla-Cuevas, 21, when they caught him in the act of sexual battery after following him for several weeks, Fullerton police Sgt. Kathryn Hamel said in a written statement.
Gradilla-Cuevas was booked on suspicion of sexual battery and was being held in lieu of $500 bail pending his initial court appearance, scheduled Thursday at the the Central Jail Court Branch of Orange County Superior Court, according to county booking records. His occupation was listed as “unemployed.”
Though they didn’t know his identity, investigators had been seeking the suspect since August, she said. “Detectives from the Fullerton Police Department, had been actively searching for a male suspect involved in at least seven reported incidents of sexual battery on females in the northeast area of Fullerton near California State University, Fullerton.”
The crimes took place between 5 p.m. and 9 p.m., police said.
“In each case, the suspect approached the victims from behind and sexually battered them by grabbing private parts of the bodies,” Hamel said. The serial groper immediately fled after each incident, and none of the victims were injured.
Detectives identified Gradilla-Cuevas as a suspect after finding him driving a vehicle similar to one captured on surveillance video in one of the alleged attacks, Hamel said.
Detective then began tailing the suspect for several weeks, the sergeant said. Gradilla-Cuevas was seen stalking dozens of potential victims in Fullerton, Placentia and La Habra, Hamel said.
Detectives watched shortly after 7 p.m. Tuesday as Gradilla-Cuevas parked his car and approached a lone woman walking on Nutwood Avenue, near Placentia Avenue, Hamel said.
“(Gradilla-Cuevas) then ran up behind the lone female victims and slapped her buttocks,” she said. The suspect fled, but was immediately detained and arrested.
Anyone with information, or anyone who has had a suspicious encounter with the suspect is asked to contact Detective Carin Wright at 714-738-6754. 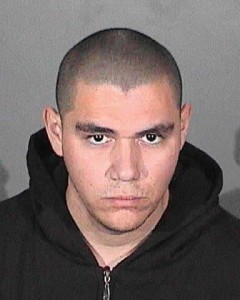 COVINA >> Police arrested a 21-year-old Covina man Tuesday who accidentally shot a teenage friend in the arm earlier this month, officials said.
Marcos Santiago Contreras, 21, is accused of assault with a deadly weapon in connection with the shooting, which took place about 7 a.m. Feb. 14 in the 500 block of Rimsdale Avenue, according to Covina police officials and Los Angeles County booking records.
Officers responded to a reports of a shooting when they found a 16-year-old boy walking in the area with a gunshot wound to his left arm, Covina police Sgt. Gregg Peterson said.
The teen did not cooperate with investigators and told police he was wounded in a drive-by shooting, Peterson said. But police concluded the boy’s story was false.
Detectives eventually determined the teen had been shot accidentally while riding in a car nearby, he said.
Contreras was driving with the teen as a passenger, the sergeant said. Contreras was showing off a handgun to the teen when the gun went off. The wounded boy exited the car, and Contreras drove off.
After determining what had taken place, Peterson said officers arrested Contreras shortly after 5 p.m. Tuesday at his home in the 19000 block of East Arrow Highway.
During a search of the suspect’s home, police found a gun believed to have been involved in the shooting, Peterson said. Police also recovered a fired bullet from the door of Contreras’ car.
According to county booking records, Contreras was being held in lieu of $50,000 bail pending a scheduled arraignment Thursday in West Covina Superior Court.

PHOTO of Marcos Santiago courtesy of the Covina Police Department.