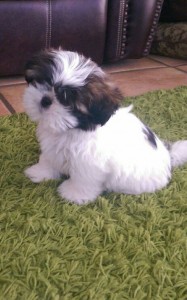 AVOCADO HEIGHTS >> After a burglary this week at their, there’s just one stolen item an Avocado Heights family is desperate to have returned: their 7-year-old daughter’s teacup Shih Tzu puppy.
The 12-week-old male puppy, coincidentally named Bandit, was stolen Thursday during a break-in at the Rangel family’s home in the 600 block of Reburn Avenue, in the unincorporated county area of Avocado Heights, homeowner Roman Rangel said. The burglary took place sometime between 10:30 a.m. and 3 p.m.
While the burglar or burglars made off with various items from the home, including jewelry and cash, ““We don’t care as much about the and stuff as we do about the dog,” Rangel said.
“It just blew my mind,” he added. “Really? Take the dog?”
Sgt. Rico Sandoval of the sheriff’s Industry Station confirmed deputies responded the home Thursday and took a residential burglary report. The investigation was ongoing, he said, and no suspects were in custody.
The intruders broke into the home through a bathroom window, Rangel said. 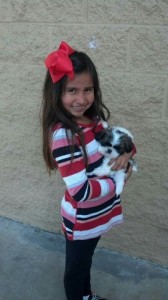 The dog belonged to Rangel’s 7-year-old daughter, Mariah, he said. “It was a reward for doing well in school.”
The family adopted Bandit four or five weeks ago, Rangel said. “In just a few weeks, we grew really attached to it.”
Rangel asked that anyone who sees Bandit contact the sheriff’s Industry Station at 626-330-3322.
“We’d just really like to get the dog back,” he said. “No questions asked.”