IOWA >> A heavily-armed serial bank robber known as the “AK-47 Bandit,” who shot and wounded a Chino police officer during a bank robbery three years ago at the outset of a nationwide crime spree, struck again Tuesday in Iowa, according to the FBI.
The bandit showed up at the Heartland Community Credit Union in Mason City, Iowa, Tuesday morning, armed with his usual AK-47-style rifle fitted with a large-capacity drum magazine, FBI officials said in a written statement. 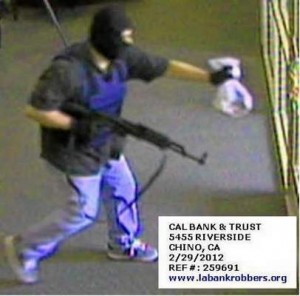 “ Based on witness descriptions, surveillance photos and other indicators, agents and detectives jointly investigating this case in multiple jurisdictions (and) states believe the Mason City suspect is the same individual linked to the violent series of bank robberies attributed to the ‘AK-47 Bandit,’ which brings the total number of linked robberies to seven,” FBI spokeswoman Laura Eimiller said.
The spree of bank heists began on Feb. 29, 2012, when the bandit robbed the California Bank and Trust, 5455 Riverside Drive, and shot a Chino police officer while making his getaway.
Robberies and attempted robberies throughout California and the nation have since been linked to the bank robbery.
He’s believed to be responsible for crimes in Chino, Vacaville, Sacramento, Washington, Idaho, Nebraska, and now Iowa, according to the FBI.
$100,000 in reward money has been offered for information leading to the capture and conviction of the AK-47 bandit. The FBI has offered $75,000 in reward money, Eimileer said, while other parties have added an additional $25,000.
Officials have described the robber as a white in his 20s to 40s, 5 feet 9 inches to 6 feet tall, of medium build, woith possibly blue eyes. He generally wears a black ski mask and gloves and carries the assault rifle which gave him his moniker.
Anyone with information can reach the FBI in Los Angeles at 310-477-6565.