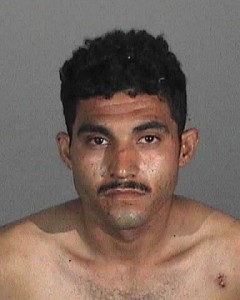 MONTEBELLO >> Police arrested a transient Wednesday they believe kidnapped and carjacked a 19-year-old Azusa woman at knifepoint the day before.
Police, aided by a K-9, found and arrested Omar Alfaro Juarez, 23, about 7:40 a.m. in the 1300 block of South Montebello Boulevard, according to Montebello police officials and Los Angeles County booking records.
He’s accused of kidnapping, carjacking and assault with a deadly weapon in connection with a series of crimes, unfolding about 2 a.m. Tuesday at Bluff Road and Whittier Boulevard, Montebello police officials said in a written statement.
The woman had stopped her car in the area to rest and wait for a friend while driving home and fell asleep with car unlocked, police said.
“She was later awakened when she felt something on her neck and realized that a male was in her passenger seat holding a knife to her neck,” according to the statement.
Juarez allegedly forced the woman over to the passenger seat and drove her around for several hours, forcing her to remove $20 from an ATM at Beach Street and Greenwood Avenue, Montebello police Detective Alfred Martinez said, officials said.
The woman reported seeing a possible second suspect at the convenience store, though police were still seeking that man and trying to determine whether he was involved in the crime, Martinez said.
The woman was freed about six hours later when a parking enforcement officer called police to report what they thought to be domestic violence in the 1700 block of Bluff Road, Martinez said. Juarez fled when officers arrived and was not found.
Detectives later identified Juarez as the suspect and began surveillance in the area of Montebello Boulevard and Elm Street, where he was known to frequent. They spotted Juarez Wednesday afternoon.
“Juarez refused to surrender and was apprehended by K-9 Cody,” the police statement says. Vernon and Monterey Park police assisted in the arrest, along with a Los Angeles County Sheriff’s Department helicopter.
The woman suffered a superficial cut to her neck, but no serious injuries, Martinez said.
Juarez was being held in lieu of $100,000 bail pending his arraignment hearing, scheduled Friday in Los Angeles Superior Court.