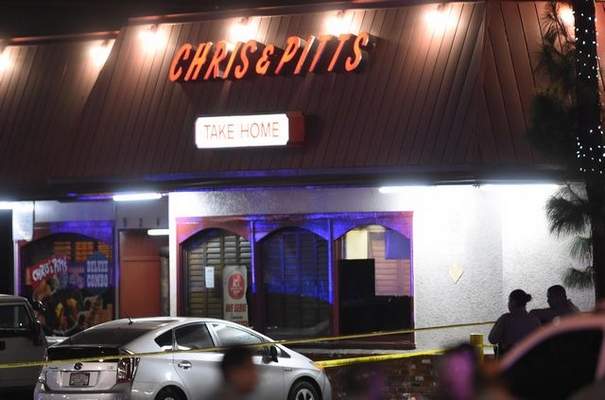 Coroner’s officials identified the armed carjacking suspect who was fatally shot by deputies inside a Downey restaurant following a car chase through several communities and taking hostages inside the eatery.
Eddie Tapia, 41, died at the scene after being shot by SWAT deputies at the conclusion of Thursday night’s standoff, Los Angeles County Department of Medical Examiner-Coroner Assistant Chief of Operation Ed Winter said. His city of residence was unknown.
Sheriff’s officials said the man took four people hostage inside the Chris’ & Pitt’s BBQ restaurant at 9243 Lakewood Blvd.
• Related: Suspect shot and killed after chase, standoff
Deputies shot Tapia when he didn’t comply with orders to put down his weapon and “posed as an imminent threat to the hostages”, according to a sheriff’s department statement. The department didn’t say how many deputies were involved in the shooting.
• Video: Sheriff’s press conference
Four hostages were rescued, and the suspect’s handgun was recovered. Lt. Darren Harris said the hostages weren’t injured.
“He posed a great risk to the public, and deputies made a split-second decision,” Harris said,
…FULL STORY