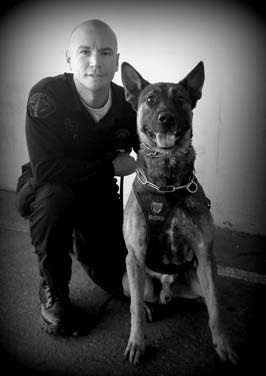 MONTEREY PARK >> A four-legged Monterey Park police officer will soon be patrolling with a bullet- and stab-resistant vest thanks to a donation from a charity organization dedicated to protecting police K-9s.
“Piro,” a 2-year-old Belgian Malinois, has been apprehending suspects and sniffing out drugs since completing training about eight months ago, Monterey Park police Sgt. Gus Jimenez said. The dog is handled by Officer Ryan Esquibel.
Vested Interests in K9s Inc. announced Friday hat Piro had been selected to received a free vest, provided by Michigan-based manufacturer Armor Express, Jimenez said. The vest is expected to arrive next week.
Monterey Park police have to other K-9s — Robin and Veeda — which have both previously received donated vests through the Massachusetts-based nonprofit organization, the sergeant said.
Vested interests in K9s has provided more than 1,600 protective vests to police dogs in 49 states at a cost of $1.5 million, donated by private and corporate sponsors, Jimenez said.
The group estimates there are more than 30,000 law enforcement dogs in the U.S.
For more information on Vested Interest in K-9s, visit www.vik9s.org.