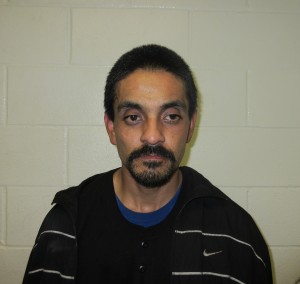 IRWINDALE >> Police working a DUI patrol in Irwindale late Christmas night arrested an alleged drunken driver who led them on a chase in a stolen pickup truck that ended in a crash at a park in Baldwin Park, authorities said.
Miguel Higuera Lujan, 36, of Baldwin Park remained jailed in lieu of $25,000 bail Saturday on suspicion of auto theft, DUI and hit-and-run, according to Irwindale police officials and Los Angeles County booking records.
Two officers were working an extra enforcement operation in search of intoxicated drivers just after 11 p.m. when they saw a 1994 Nissan pickup truck run a stop sign at Ramona Boulevard and Elton Avenue, Irwindale police Sgt. George Zendejas said.
The driver refused to pull over, starting a chase, the sergeant said. He fled for about 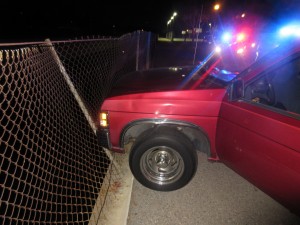 a mile, running through a red light otherwise driving recklessly, before driving the truck through the basketball court at Hilda L. Solis Park, at 15010 Badillo Street in Baldwin Park.
“Thankfully, there was no one in the area,” Zendejas said.
Lujan jumped from the still-moving truck and continued to flee on foot. The truck came to a stop after crashing into a chain link fence at the edge of a flood control channel, officials said. Police soon captured the fleeing suspect nearby.
Police determined the truck had been reported stolen in the Temple City area.
Zendejas commended the involved officers.
“This was outstanding work on behalf of the officers working the DUI enforcement patrol and taking another dangerous DUI driver off the streets to keep our citizens safe during the holiday season,” he said.
Lujan was scheduled to appear for arraignment Tuesday in West Covina Superior Court.