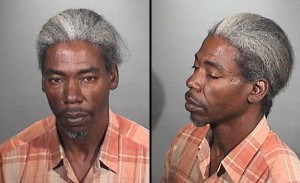 PASADENA >> A Pomona man sought on suspicion of killing his wife by setting her on fire on Christmas Day is in custody after police found and arrested him on a bus in Pasadena Sunday morning, authorities said.
Clarence Durell Dear, also described by police as Clarence Duwell Dear, 51, has been sought as a fugitive since Christmas Day, when he doused his wife in gasoline and set her on fire during a domestic dispute at their Pomona home, according to Pomona police Sgt. Bert Sanchez.
Pasadena police officers and Los Angeles County sheriff’s deputies tracked Dear down on a Metro bus at Foothill Boulevard and Halstead Street in Pasadena shortly after 10 a.m., sheriff’s officials said.
“Information was received that Clarence Duwell Dear had boarded a bus in the City of Altadena,” Pomona police officials said in a written statement. “Pasadena Police, along with Los Angels County sheriff’s deputies, responded and located the bus and took suspect Dear into custody without incident.”
Pasadena police turned Dear over to Pomona police, where he was booked on suspicion of murder.
Police in Pasadena deferred comment to their counterparts in Pomona. Pomona police released no further details regarding the case or the arrest Sunday.
Dawn Hensley, 41, died following the alleged attack, which took place about 1:45 p.m. Friday at the home the victim and suspect shared in the 1500 block of Cordova Street in Pomona, officials said.
Neighbors reported she fled from her home engulfed in flames and collapsed in the street, Sanchez said.
She was taken to a hospital where she soon succumbed to her injuries.
An autopsy was yet to be carried out Sunday, coroner’s officials said.
Dear has no criminal convictions listed in Los Angeles Superior Court records.
He was being held in lieu of $1 million bail at the Pomona Police Department’s jail pending his initial court appearance, scheduled Tuesday in Pomona Superior Court, records show.