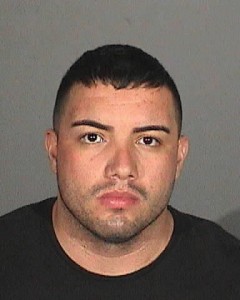 ALHAMBRA >> Police arrested a Downey man Wednesday after he robbed a woman while she was with her toddler outside an Alhambra market, authorities said.
Gabriel Jesse Acuna, 25, is accused of armed robbery following the 2 p.m. crime, Alhambra police Sgt. Jerry Johnson said.
He approached a woman in her 30s from behind as she was placing her 2-year-old child into her car outside a market a market at Valley Boulevard and 9th Street, Johnson said.
The suspect — later identified as Acuna — brandished what appeared to be a handgun and demanded the woman’s property, the sergeant said. She turned over her purse, and the robber ran off.
A Monterey Park police officer who happened to be in the area spotted the suspect running through the parking lot with the purse, police said.
The Monterey Park officer detained the fleeing suspect without a struggle until Alhambra police arrived to take custody of the alleged robber. Officers recovered the woman’s purse, as well as a realistic-looking airsoft pistol, designed to shoot plastic BBs.
Acuna was taken to a hospital following his arrest after he complained of a pre-existing medical condition, Johnson said.
He was being held in lieu of $100,000 bail pending his arraignment hearing, scheduled Friday in Alhambra Superior Court, records show.