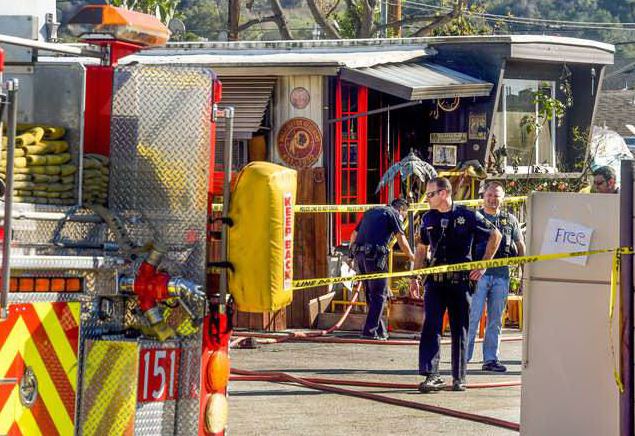 GLENDORA >> Firefighters pronounced a person dead after extinguishing an intense fire at a Glendora mobile home Thursday, authorities said. Authorities initially feared two people had been killed in the fire, though it was ultimately determined that a single person perished in the blaze.
The identity of the victim was not released pending positive identification and notification of family, Los Angeles County coroner’s officials said. The person was initially described only as an adult.
Officials first received a 911 call at 11:32 a.m. reporting a 30-foot-long fifth-wheel trailer was on fire at the Tropics Trailer Park, 428 E. Route 66, Glendora police Lt. Matt Williams said.
Los Angeles County Firefighters arrived in 8 minutes and extinguished the flames by 11:53 a.m., the lieutenant said.
“The initial information from the joint investigation indicated there were two victims,” Glendora police offiials said in a written statement. “Upon the arrival of the Los Angeles County Coroner, the search of the trailer continued and only one victim was located.”
One adjacent mobile home sustained damage in the fire, Los Angeles County Fire Department Inspector Randall Wright said.
The resident of the damaged unit was displaced, but unharmed.
No firefighters were injured, Wright added.
Firefighters found the victim during their initial efforts to extinguish the fire, Williams said.
A secondary search turned what was initially believed to be additional remains, though a closer inspection revealed the object was actually debris, officials said.
The cause of the fire remained under investigation, however, there were no signs of a crime, Williams said.
“It’s too early in the investigation to know what happened,” he said.
A distraught woman at the scene said she believed the victim to be her brother and awaited information from authorities. She declined to comment further.
Investigators from the Los Angeles County Fire Department and the Los Angeles County sheriff’s Arson-Explosives Detail joined Glendora police in the investigation.
With the exception of the two scorched units, the residents of the 29-space mobile home park were allowed to return to their homes Thursday afternoon, Williams said.
Eastbound Route 66 remained closed to traffic into the afternoon as the investigation continued.