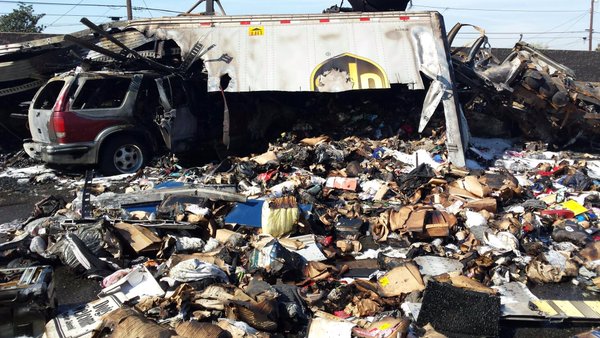 CITY OF COMMERCE >> A Whittier man was street racing when he triggered a fiery six-vehicle crash that claimed three lives and left two other people seriously injured on the 5 Freeway in Commerce early Saturday, authorities allege.
Dealio Lockhart, 35, is accused of vehicular manslaughter in connection with the 12:01 a.m. wreck on the southbound 5 Freeway, just north of Triggs Street, according to California Highway Patrol Officer Doris Peniche.
Two men and one woman died in the crash, Los Angeles County Department of Medical Examiner-Coroner officials said. Their identities were not available Saturday. 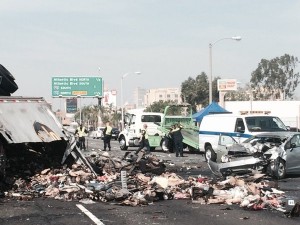 Both directions of the 5 Freeway remained shut down through Saturday afternoon and were expected to remain off-limits through Sunday morning as officials investigated the scene and cleared the wreckage.
Lockhart was at the wheel of a Dodge Challenger in the No. 2 lane, “while racing a Dodge Charger travelling in the No. 1 lane,” Peniche said in a written statement.
He tried to pass a slower moving vehicle when he lost control and struck the side of UPS tractor-trailor driving in the right-hand lane, the officer said.
“The impact caused the tractor trailer to lose control and collide into the center median and then became airborne, hitting a gray Nissan and shearing the top of the Nissan off,” Peniche said.
The truck continued out of control, coming to rest on top of a red Ford Explorer that had been heading northbound on the 5 freeway, according to the CHP.
“The tractor-trailer immediately became engulfed in flames,” Peniche said.
Debris from the collision also struck a Chevrolet Tahoe and Chevrolet Silverado in northbound traffic lanes.
The driver of the burned truck was pronounced dead at the scene, along with a man and woman who were inside the badly mangled Nissan, according to CHP and coroner officials.
Two other people were hospitalized at Los Angeles County-USC Medical Center with “major” injuries as a result of the crash, Peniche said. Two other people were reportedly treated for minor injuries.
The Dodge Charger Lockhart was allegedly racing and its driver, were not found.
According to county booking records, Lockhart was being held in lieu of $1 million bail at the Inmate Reception Center in Los Angeles pending his initial court appearance, scheduled Tuesday in Los Angeles Superior Court.
He has no prior criminal history listed in Los Angeles County Superior Court records.
The freeway was expected to remain closed through Saturday night, or even Sunday morning, as workers carried out barrier repairs and repaved the damaged roadway, Caltrans officials said.
Anyone witnesses, or anyone with information is asked to contact the CHP’s East Los Angeles area office at 323-980-4600. 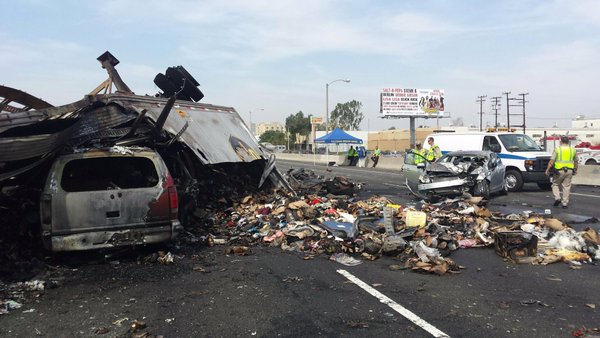