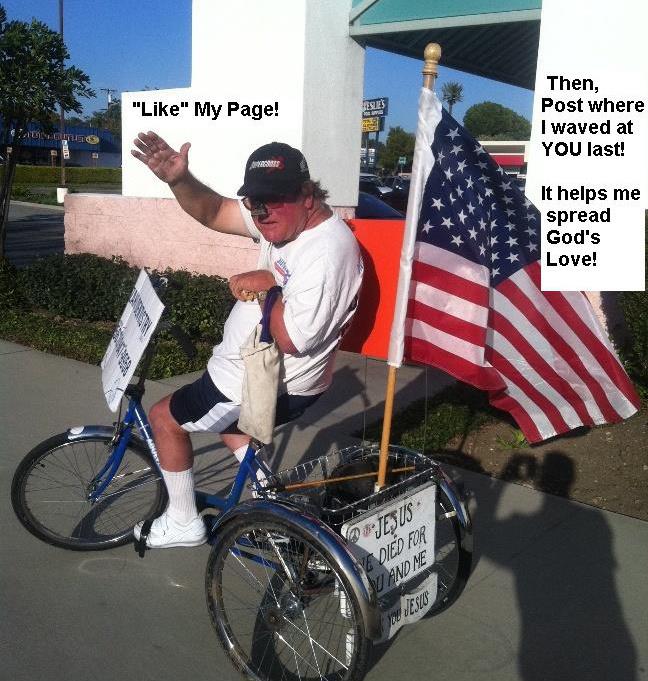 WHITTIER >> For decades, Danny Martin has shared his love for the Whittier community by waving to all from his unmistakable tricycle, fitted with an American Flag and a signs exalting Jesus Christ.
And the community returned the sentiment over the weekend after the locally-renowned “Tricycle Man” had his cycle destroyed in a collision with a car, raising more than 12 times the $1,000 goal of an online fund set up by a friend to help Martin and his family within less than one day.
Martin, 57, was involved in a collision with a vehicle just before 9 a.m. Friday at Whittier Boulevard and First Avenue, Whittier police Lt. Bryan Ellis said.
He was crossing the street when he was struck by a car making a left turn, Ellis said. The cause remained under investigation, but the collision was being investigated as an accident. Martin was treated for injuries not believed to be serious.
But the accident left Martin without his three-wheeled conveyance, friend Shaun Witsoe explained on the fundraising website he organized at www.gofundme.com/kfrepqas. The initial goal was $1,000.
But by Saturday morning, more than 380 donors had contributed more than $12,000.
“$1,000 will go towards his new bike and the rest will go to him and his family to help with medical bills and anything else that the family may need,” according to the website. 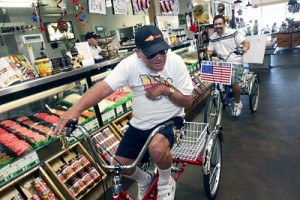 Witsoe posted a video thanking the community for their support after the fund climbed past $$8,000.
“So god bless you all, because Danny’s going to have a very big surprise,” he said, adding that he planned to keep the fund open for a week.
Witsoe reported that Martin was out of the hospital, and even back on the road on a donated bike by Friday afternoon.
“He is strong and will not be kept down!” the friend wrote. “I can’t wait to show him all the support he has been shown with your donations. We will get him a new bike!”
A former professional motorcross racer, Martin was left comatose and partially paralyzed in a 1981 motorcycle crash.
Martin made an astonishing recovery after doctors told his family he would never walk or talk again.
He has since become a local fixture, riding miles each day around Whittier on his flag-adorned tricycle, waving to all those he passes and raising spirits.
Donors left not only monetary contributions, but also words of encouragement on the website.
“Thanks for all the waves. May God bless you today and always,” commented Sharon Kotoff.
“God Bless you, Danny! You make Whittier a little bit brighter everyday,” Chris MeMaster Sneddon wrote.
“Danny, Thank you for always brightening up our day,” Griselda Cedeno added.