EAST LOS ANGELES >> Monterey Park police shot and wounded an attempted murder suspect during a gunfight in an East Los Angeles Wednesday, authorities said.
Monterey Park police Lt. Carrie Mazelin said officers located the suspect and the shooting occurred about 9:25 a.m. in the area of Woods Avenue and Escuela Street.
The suspect, a 34-year-old Monterey Park man, suffered a single gunshot wound to his torso and was expected to survive his wounds, according to Lt. John Corina of the sheriff’s Homicide Bureau, which is spearheading the investigation into the officer-involved shooting. He’s also suspected of shooting and wounding an active duty U.S. Marine outside a Monterey Park convenience store earlier in the week. His name was not available late Wednesday as he remained hospitalized. 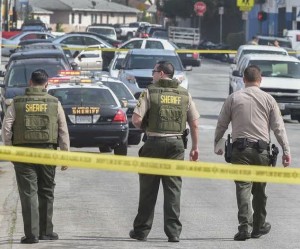 No officers were hurt, but an officer’s patrol car was struck by gunfire, officials said.
Capt. Steve Katz of the sheriff’s Homicide Bureau said Monterey park officers were following up on the previous shooting when the shooting took place.
“There were involved in identifying and tracking down a violent criminal who had committed an attempted murder in their city,” Katz said.
A Monterey Park officer spotted the suspect riding a bike in the area of 4th Street and Woods Avenue, Corina said. The suspect pulled a handgun and began shooting at the officer.
The officer did not initially return fire for fear of collateral damage in a nearby residential neighborhood, Corina said. The officer followed the suspect as he headed south on Woods Avenue from 4th Street, still riding a bicycle.
As the suspect and officer approached Escuela Street, the suspect again began firing at the officer, the lieutenant said.
Corina said the officer then did shoot back, firing multiple shots through the windshield of his patrol car, Corina said.
One bullet struck the suspect in the abdomen, Corina said. He fell wounded and was quickly taken into custody.
The man was wanted in connection with a shooting that left a U.S. Marine who was on leave wounded outside a Monterey Park 7-Eleven store earlier this week.
The attack took place about 2:45 a.m. Sunday at the convenience store, 281 E. Pomona Blvd., along Monterey Park’s southern border, Monterey Park police Sgt. Dave Elliot said.
The victim and a friend arrived at the store and were confronted by a man in the parking lot, the sergeant said.
“Some words were exchanged when the suspect brandished a firearm and shot the victim one time,” Elliot said.
The victim, who was struck in the abdomen, was hospitalized, Elliot said. An update on his condition was not available.
Witnesses described the shooter as a Latino man in his 20s, wearing a gray hooded sweatshirt and dark pants, carrying a dark-colored handgun, Elliot said. “The suspect was seen fleeing the parking lot on a bicycle.”
Corina said the suspect had been acting belligerent and trying to start fights with other patrons as well before the Marine and his friend, a fellow Marine, arrived at the convenience store, Corina said. It was unclear whether the suspect was intoxicated at the time.
A revolver and bicycle recovered at the scene of Wednesday’s gunfight between the suspect and police officer were believed to be the same used in Sunday morning’s shooting, Corina said.
Anyone with information regarding Sunday’s shooting is asked to contact Monterey Park police Detective Han at 626-307-1246.
Anyone with information regarding Wednesday’s officer-involved shooting can reach the sheriff’s Homicide Bureau at 323-890-5500.
Tips may also be submitted anonymously to L.A. Regional Crime Stoppers at 800-222-8477. 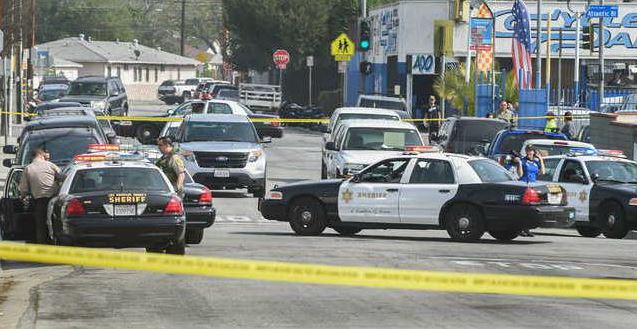