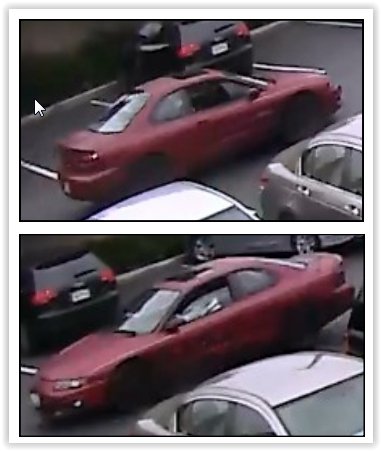 SANTA FE SPRINGS >> Police are seeking a robber who followed a Santa Fe Springs woman home before robbing her at her doorstep earlier this month.
The crime took place about 10 a.m. March 5, Whittier police officials said in a written statement.
“We believe the suspect followed the victim from the area of Norwalk Boulevard and Imperial Highway (in Norwalk) driving a two-door, 1995-2000 red Dodge Avenger with no hubcaps,” according to the statement.
When the woman arrived home, the robber accosted her at her doorstep and robber her of her purse, police said.
Authorities described the robber as a black man in his early-30s, about 6 feet tall, of thin build, with a short beard.
Anyone with information is asked to contact Whittier police Detective Wolfe at 562-409-1850, or call the Whittier Police Department’s tip hotline at 562-567-9299.

PHOTO of suspect vehicle courtesy of the Whittier Police Department.