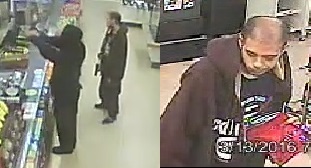 SAN DIMAS >> Sheriff’s officials have released surveillance camera images of two gunmen who robbed a San Dimas 7-Eleven store last weekend.
The armed robbery took place shortly after 4 a.m. Sunday at the convenience store at Foothill Boulevard and San Dimas Canyon Road, Los Angeles County sheriff’s officials said.
The two men pretended to be customers, browsing through products at the store, before both pulled handguns on the clerk, according to sheriff’s Sgt. Jorge Chavez. The robbers then emptied the cash register of money and fled with cash, as well as several miscellaneous items from the store. They were last seen heading east.
Officials described both robbers as Latino men in their late-20s.
One of the men was about 5 feet 11 inches tall, 180 pounds, of medium complexion, unshaven, with dark eyes. He wore a gray baseball cap with an 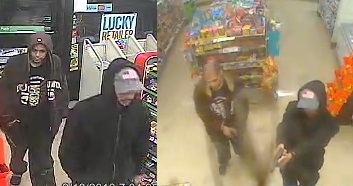 American flag logo, glasses with white rims, a black hooded sweatshirt, black pants and black shoes.
The second robber was about 5 feet 10 inches tall, 180 pounds, of medium complexion, unshaven, with light-colored eyes. He had short, black hair, balding on top. He wore a dark brown zippered sweatshirt with a lighter color material inside the hood and possibly an “ECKO UNLTD” logo on the back. He also wore a black shirt with an unknown logo on the front, dark pants, and dark shoes accented with white.
Anyone with information can reach the sheriff’s San Dimas Station at 909-450-2700. Tips may also be submitted anonymously to L.A. Regional Crime Stoppers at 800-222-8477.
— Staff Writer Monica Rodriguez contributed to this report.