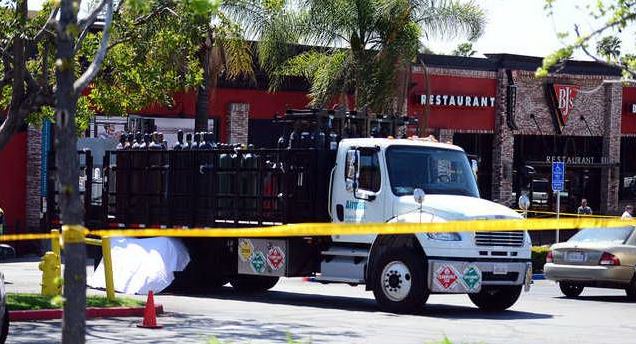 WEST COVINA >> An elderly West Covina woman died after being run over by a flatbed truck in a parking lot at the Eastland Center shopping mall Thursday afternoon, officials said.
The fatal collision took place at 1:06 p.m. in the parking lot at the east end of the mall, 2753 E. Eastland Center Drive, in between a BJ’s Restaurant & Brewhouse and a Chili’s Grill & Bar, West Covina police Detective David Sifling said.
West Covina firefighters were first on the scene of a reported collision between a vehicle and pedestrian, Sifling said.
They found the woman pinned beneath the dual rear wheels of an Airgas flatbed truck hauling metallic gas cylinders, he said.
It was immediately apparent the woman was beyond help, and paramedics pronounced her dead at the scene, the detective said. Her age was not available. 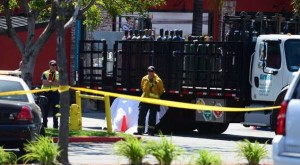 The woman, described as a local resident in her 80s, was walking to the BJ’s with her adult daughter for lunch when she was struck by the backing truck, Sifling said.
Coroner’s officials did not release her name Thursday pending positive identification and notification of kin.
Sifling said the woman and her daughter were well-known at the BJ’s, and the neighboring Chili’s, where they dined often.
Chili’s closed for business for the remainder of the day, officials said.
Police interviewed the driver of the truck, who appeared distraught.
A witness, who declined to be identified, said the truck was backing up, with its backing alarm sounding, when the woman was struck.
An emotional family member at the scene did not wish to comment.
No arrests had been made as officers from the West Covina police Traffic Division continued, Sifling said.
Officers cordoned off a portion of the parking lot and escorted mall patrons to cars parked within the yellow police tape.
Anyone with information can reach West Covina police at 626-939-8500.