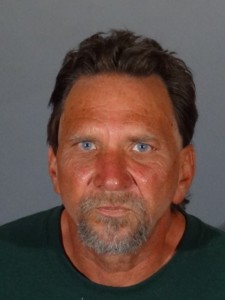 COVINA >> Police jailed an out-of-compliance sex offender after he tried to lure a 4-year-old girl into the men’s bathroom at a Covina park Friday, authorities said.
Matthew James Smith, a 49-year-old transient, was booked on suspicion of child annoyance and failing to register as a sex offender following his arrest shortly after 11 a.m. at Covina City Park, 301 N. Fourth Ave., Covina police Sgt. gregg Peterson said in a written statement.
Police responded to the park after receiving a report, “that an adult male had attempted to lure a 4-year-old female
into the men’s public restroom at the park,” Peterson said.
The child’s mother prevented her daughter from going with the man, he said. She did not confront him directly, but kept an eye on him as she called police and explained what had happened.
Officers found Smith still in the park and detained him.
“Initially  the suspect  denied  having  any  contact  with  the  victim, however, he was positively identified and placed under citizen’s arrest for child annoyance,” the sergeant said.
Police soon also discovered that Smith was a registered sex offender who had failed to register, he said.
Further details regarding Smith’s prior criminal history were not available late Friday.
Anyone with information is asked to contact Covina police detectives at 626-384-5628. Tips may also be submitted anonymously to L.A. Regional Crime Stoppers at 800-222-8477.