NORWALK >> Detectives are seeking possible additional victims of a 54-year-old sex offender caught trying to lure a 10-year-old girl into his car at a Norwalk park over the weekend, officials said.
Armando Hernandez of Norwalk had children’s pamphlets from a church, as well as an extra license plate, inside his car at the time of his arrest about 7:30 p.m. Sunday at Norwalk Park, 13000 Clarkdale Ave., Los Angeles County sheriff’s Detective Henry Jaquez said in a written statement.
He tried to abduct the girl shortly after 6:40 p.m., authorities said.
“(Hernandez) attempted to pull the victim, a 10-year-old girl, into a 2000 tan Toyota Corolla, licence plate 7PMD192,” Jaquez said.
The girl’s parents saw what was happening and yelled at the would-be kidnapper, who released the girl, Lt. Robin Limon said.
Responding deputies soon found the suspect, later identified as Hernandez.
Along with two hats and a red flannel shirt, deputies pamphlets for a children’s ministry at Emmanuel Reformed Church in Paramount, as well as a second license plate with a number of 4YRT979 in the trunk, according to a flyer issued by the sheriff’s department.
His car was further described as having a black hood and front fenders and dented rear quarter panels on both sides.
According to California’s online database of registered sex offenders, Hernandez has a previous conviction for annoying or molesting a minor.
He was being held without bail pending a scheduled appearance Friday in Norwalk Superior Court, Los Angeles County booking records show.
Anyone with information is asked to contact Detective Jaquez at 562-466-5434. Tips may also be submitted anonymously to L.A. Regional Crime Stoppers at 800-222-8477. 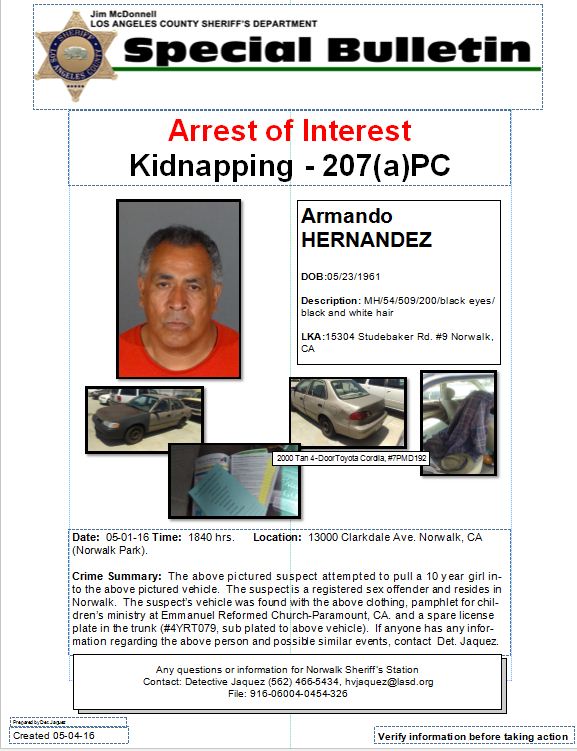