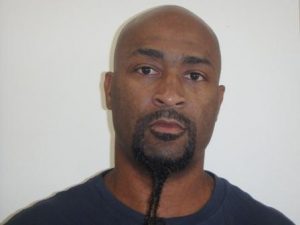 PASADENA >> Prosecutors filed charges against a convicted sex offender from Compton Friday for the alleged kidnapping of two young Pasadena woman managed to break free from their captor in harrowing escapes, officials said.
Anthony Seth McDaniel was charged with two counts of kidnapping with intent to commit oral copulation, Los Angeles County District Attorney’s Office spokesman Ricardo Santiago said.
He entered no plea, Santiago said. His arraignment hearing was postponed until May 20 in the Pasadena branch of Los Angeles County Superior Court.
McDaniel is accused of abducting two 18-year-old women about 10 p.m. on April 30 from a bus at Fair Oaks Avenue and Montana Street in Pasadena, Pasadena police officials said. He offered the victims a ride and persuaded them to get into his car.
But the women realized something was amiss when McDaniel drove in the opposite direction of where he had said he would take them, Pasadena police Lt. John Mercado said.
One of the women jumped from McDaniel’s pickup truck as it entered the 210 Freeway at Mountain Street, suffering a broken angle.
After the first victims escaped, McDaniel allegedly pulled a gun, threatened the second victim not to escape as well and ordered her to perform sex acts on him, police said. But she yanked on the steering wheel of the truck, causing it to crash into another car on the 110 Freeway in Los Angeles, police said in a written statement. McDaniel then pushed her from the slowly-moving car, causing injuries to her shoulder and arm.
In addition to two counts of kidnapping with intent to commit a sex crime, prosecutors also allege the special circumstances that McDaniel caused great bodily injury during the crimes, and that he is already a convicted sex offender.
McDaniel was convicted in 2008 of assault with intent to commit a sex offense, according to California’s sex registrant database. He remained on parole and was fitted with a GPS ankle bracelet.
During Friday’s court appearance, McDaniel’s bail was set at $2.08 million, Santiago said.
If convicted as charged, McDaniel faces up to two life terms in prison.