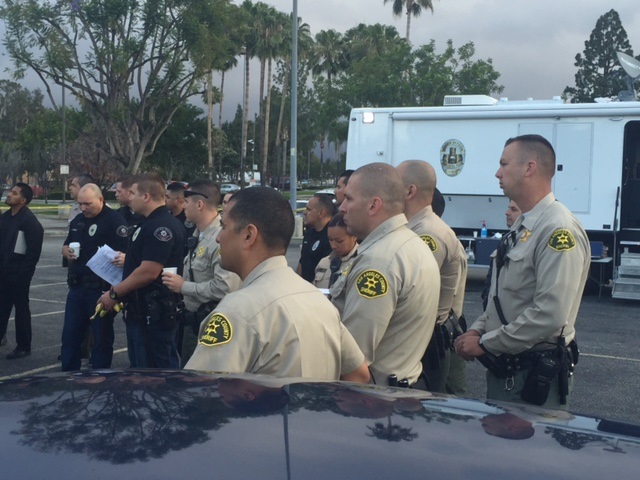 SAN GABRIEL VALLEY >> San Gabriel Valley sheriff’s deputies and police officers arrested four suspects and recovered weapons and drugs Tuesday when they teamed up for a compliance sweep targeting parolees and those under AB 109 felony probation in the San Gabriel Valley, officials said.
More than 40 law enforcement officers from the Los Angeles County Sheriff’s Department, as well as the West Covina, Covina, Baldwin Park took part in the early-morning operation, joined by U.S. Immigration and Customs Enforcement agents, state parole agents, county probation officers and representatives from the County of Los Angeles Department of Children and Family Services, according to sheriff’s Lt. Pete Cacheiro, who oversees law enforcement for the city of La Puente.
After visiting more than 30 homes of convicts, officials arrested a parolee for being a felon in possession of a loaded handgun in La Puente, Cacheiro said.
Officials arrested three AB 109 probationers in West Covina, he said. One was arrested for possession of a Taser by a felon, one was jailed for possession of ammunition by a felon and one is accused of possession of methamphetamine for sales.
The task force operation, “exemplified out community policing strategies,” Cacheiro said.
La Puente City Manager David Carmany commended the effort in a written statement. “
“Our local law enforcement strives to maintain our communities safe and provide quality services to our residents,” he said.