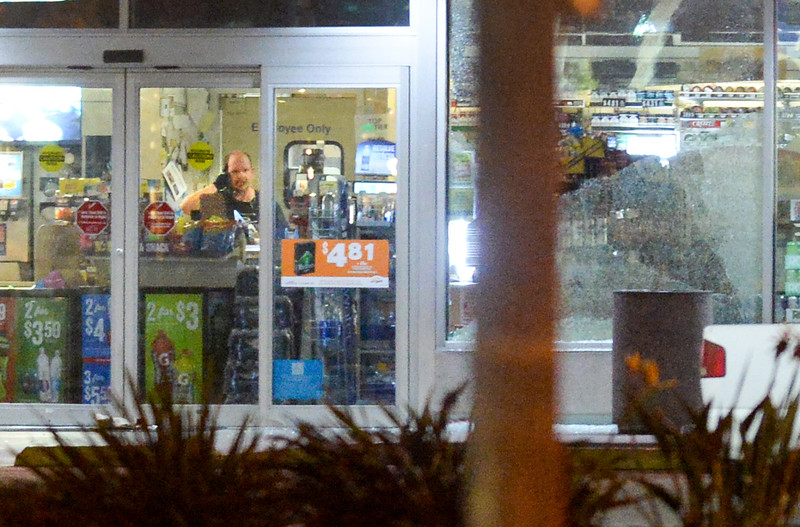 The robbery suspect stands inside by himself with a shot up window as Los Angeles County Sheriff’s deputies surround an AMPM Arco gas station on Beach Boulevard at Hillsborough Drive in La Mirada on Monday November 21, 2016. (Photo by Keith Durflinger/Whittier Daily News/SCNG)

LA MIRADA >> Coroner’s officials have released the identity of a 45-year-old La Habra man who was fatally shot by SWAT deputies following a 3-and-a-half-hour standoff at a La Mirada gas station early Tuesday morning.
Mark Daniel Sly died at the scene of the deputy-involved shooting, which took place just before 1 a.m. at the ampm convenience store and ARCO gas station at 13550 S. Beach Blvd., Los Angeles County Department of Medical Examiner-Coroner Assistant Chief of Operation Ed Winter said.
He fired at deputies at least twice during the standoff, which began with a report of a robbery in progress at the business, Los Angeles County sheriff’s officials said.
Deputies responding to the robbery encountered Sly, who matched the suspect description, standing at the front door of the convenience store armed with a handgun, Deputy Caroline Rodriguez of the sheriff’s Information Bureau said.
Sly refused commands to drop his gun and surrender, and deputies summoned a SWAT team and a crisis negotiation team to the scene.
At one point during the hours-long standoff, the suspect fired at deputies through a front window of the business, Rodriguez said.
A deputy returned fire through a window, but it was unclear of Sly was wounded in that exchange.
Sly exited the store with a handgun and again fired on SWAT deputies at 12:55 a.m., officials said. Deputies fired back, fatally wounding Sly.
The investigation remains ongoing, and anyone with information is asked to contact the sheriff’s Homicide Bureau at 323-890-5500. Tips may also be submitted anonymously to L.A. Regional Crime Stoppers at 800-222-8477.