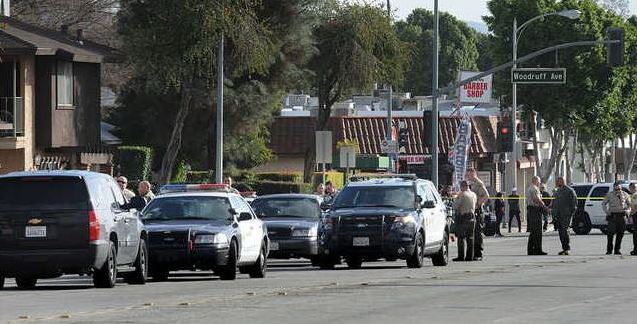 TEMPLE CITY >> An intruder attacked a woman with a wrench and fatally stabbed with a Samurai sword, also injuring a friend of the victim’s who tried to intervene, before turning himself in to deputies on Wednesday, authorities said.
The deadly attack was first reported about 12:05 p.m. at a duplex in the 6000 block of Temple City Boulevard, between Garibaldi and Woodruff avenues, according to Los Angeles County sheriff’s and fire officials.
Lt. John Corina of the Los Angeles County Sheriff’s Homicide Bureau said the woman, 40, was at home with a friend, described as a 42-year-old San Gabriel man, when the attacker barged in through the unlocked front door.
He attacked the woman with a wrench detectives believed he had brought with him to the home, the lieutenant said.
The killer then grabbed an ornamental Samurai-style sword that was hanging on the wall and used it to continue the attack, Corina said.
“(The friend) sees what’s going on. He tries to stop him,” Corina said. The friend ended up receiving non-life-threatening wounds of his own before the attacker fled from the home. The injured friend was expected to be released from the hospital later Wednesday.
The woman’s 10-year-old son was also inside the home at the time of the attack, but was unhurt, Corina said.
As deputies conducted a search of the neighborhood, the suspect approached deputies and surrendered himself, according to the lieutenant.
The 44-year-old man, who lived nearby, was taken into custody without a struggle. His identity was not available pending booking.
The identity of the woman killed in the attack was also unavailable pending positive identification by coroner’s officials and notification of family members.
The relationship between the suspect and victims was unclear, and the motive in the double-stabbing was yet to be determined, Corina said.
Both the wrench and the sword believed to have been used in the attack were recovered at the scene.
Anyone with information is urged to contact the sheriff’s Homicide Bureau at 323-890-5500. Tips may also be submitted anonymously to L.A. Regional Crime Stoppers at 800-222-8477.