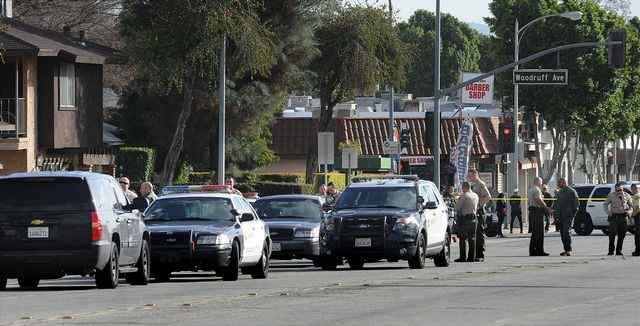 TEMPLE CITY >> Prosecutors filed murder and other charges against a Temple City man accused of killing a woman with a Samurai sword and stabbing two other people amid a violent crime spree on Wednesday.
John Ralph Perales, 44, is accused of murder, three counts of attempted murder and three counts of assault with a deadly weapon in connection with the series of alleged attacks, Los Angeles County District Attorney’s Office spokeswoman Sarah Ardalani said in a written statement. He’s also accused of the special allegation of personal use of weapons during the crimes.
He showed up at the home of 44-year-old neighbor Diane Christine Alarcon in the 6000 block of Temple City Boulevard about noon, Los Angeles County sheriff’s Lt. John Corina said. A 42-year-old San Gabriel man, described as a friend of Alarcon’s, was also visiting.
“While spending some time there with Alarcon and another male guest, an argument ensued and Perales allegedly struck both Alarcon and the male with a wrench,” according to Ardalani.
Perales then grabbed an ornamental samurai-style sword hanging on the wall at the victim’s home and stabbed both Alarcon and her visitor with it, Corina said. Alarcon died at the scene. The wounded man was treated for non-life-threatening injuries.
Alarcon’s 10-year-old son was home at the time of the attack, but was unhurt, Corina said.
Perales surrendered to deputies as deputies were searching the neighborhood for him, officials said.
Hours earlier, detectives and prosecutors allege Perales stabbed his ex-girlfriend and her adult son at their home in the 3400 block of Whistler Avenue in El Monte.
He arrived there about 2 a.m., El Monte police Sgt. Richard Luna said.
“After spending some time there, Perales allegedly crawled on top of his ex-girlfriend as she was sleeping, woke her up and then stabbed her,” Ardalani said. The woman’s 22-year-old son tried to intervene and was also stabbed and injured. An update on the conditions of the mother and son was not available Friday.
Detectives were also investigating Perales in connection with a Rosemead carjacking that occurred in between the two stabbing incidents, however charges had not been filed for that alleged crime.
Perales has a lengthy criminal record including convictions for false imprisonment by violence in 2014; carrying a concealed dirk or dagger in 2011; being a prisoner in possession of a weapon and auto theft in 2001; attempted burglary in 1996; burglary in 1992; and acting as an accessory to a crime after the fact in 1991.
He entered no plea in court on Friday. His arraignment hearing was postponed to Feb. 2 in the Pomona branch of Los Angeles County Superior Court, Ardalani said. In the meantime, bail has been set at $6.21 million.
If convicted as charged, Perales could face a sentence of life in prison.