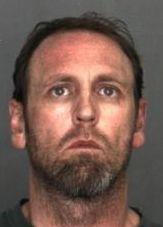 EL MONTE >> Police jailed a convicted felon from Walnut early Friday after recovering 3,300 marijuana plants, 308 pounds of finished pot, an ounce of methamphetamine and a loaded gun from a warehouse in El Monte, authorities said.
Brian Lee Skipper, 46, was arrested during the 7 a.m. raid at a commercial building at 2645 Merced Ave., according to El Monte police Sgt. Richard Luna. Investigators showed up with a search warrant, seeking an illicit marijuana-growing operation.
“Upon entry, police personnel located (Skipper) and numerous pieces of equipment and devices used for the cultivation of marijuana and concentrated cannabis,” Luna said in a written statement, “In addition, detectives located methamphetamine, a loaded firearm and surveillance and security equipment.”
Police also found “numerous types of hazardous chemicals” used in the production of concentrated cannabis, also known as “wax” or “honey oil.”
“As a result, the location was vacated and additional investigators from the L.A. Impact Narcotics Team and Los Angeles County Hazardous Materials responded,” Luna said. “An additional investigation was completed as well as a cleanup which rendered the property safe.”
Police also allege the grow operation was wired to bypass the electric meter and steal power from the grid.
Skipper was booked on suspicion of cultivation of marijuana, possession of marijuana for sales, operating a chemical drug lab, possession of methamphetamine for sale, being a convicted felon in possession of a firearm and theft of utility services.
The seized marijuana and methamphetamine carry an estimated street value of $750,000, Luna said.
Skipper, a convicted felon who was on active probation, was being held in lieu of $75,000 bail pending his initial court appearance, according to police and Los Angeles County booking records.
Skipper just pleaded guilty in January of Possession of methamphetamine for sale and theft of utlities in a case first filed in 2014, according to San Bernardino Superior Court records. He also admitted a prior drug offense. Additional charges of cultivation of marijuana and possession of marijuana for sales were dismissed.
He was also convicted in San Bernardino County of domestic abuse in June of 2006, and of making criminal threats in 2001, records show.
In Los Angeles County, Skipper’s criminal history stretches from 1989 to 2011 and includes convictions for drug possession, assault and battery, an illegal weapon violation and driving on a suspended or revoked license.
Anyone with information is encouraged to contact El Monte police at 626-580-2100, or by email at tips@empd.org.