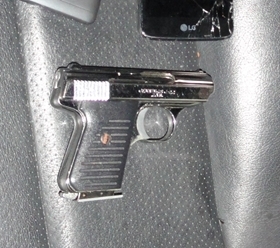 IRWINDALE >> Police arrested an ex-con with drugs, a loaded handgun and an active arrest warrant after approaching him for illegally parking in a handicapped stall outside an Irwindale convenience store early Saturday, authorities said.
James Matthew Doke, 31, of Duarte was ultimately booked on suspicion of being a felon in possession of a firearm and ammunition, carrying a concealed firearm in a vehicle, heroin possession and possession of methamphetamine for sales, according to Irwindale police Sgt. Rudy Gatto. He was also being held on a warrant for violating the terms of his “Post-Release Community Supervision” felony probation under AB 109 guidelines.
The alleged inconsiderate parking violation first drew the attention of an officer about 3:20 a.m. to an ARCO gas station and ampm minimart at 16000 E. Foothill Blvd.
“During the course of the officer’s investigation, the officer found that the subject had an active ‘no bail’ warrant for his arrest,” Gatto said in a written statement.
After detaining Doke in connection with the warrant, “It was subsequently found that the suspect was in possession of a loaded semi-automatic handgun, methamphetamine, heroin and marijuana,” Gatto said. “It was also found that the subject was a convicted felon.”
Police took Doke into custody without a struggle.
In addition to small amounts of heroin and recently-legalized marijuana, officers seized about 10 grams of methamphetamine, along with “paraphernalia that would be indicative of narcotics sales,” Gatto said.
Doke’s extensive criminal history dates back to age 19, Los Angeles County Superior Court records show.
He was convicted of possession of methamphetamine, possession of drug paraphernalia, and forging an officials government seal in 2004. A charge of check fraud was dismissed.
Doke was convicted of being under the influence of drugs in 2005, as well as auto theft and resisting or obstructing police in 2006, records show.
He pleaded “no contest” to a charge of assault with a deadly weapon on a peace officer in 2011, while a charge of auto theft with a prior auto theft conviction was dismissed.
Doke was again convicted of resisting or obstructing police in 2011. A charge of possession of a stun gun by a convicted felon was dropped.
In 2013, Doke was convicted of auto theft with a prior auto theft conviction, and his probation was revoked for a violation later the same year.
He was arrested once more on Nov. 17, 2016, for violation his AB 109 felony probation. He received a sentence of 40 days in jail, but was released after 10.
Officials filed another allegation of violating his felony probation in October of 2016, but Doke failed to appear in court, resulting in the warrant on which he was being sought at the time of his arrest on Sunday morning.
Under AB 109, also known as the “California Public Safety Realignment” of 2011, those convicted of crimes deemed, “non-serious,” “nonviolent,” and “non-sexual,” can be supervised by county probation departments, rather than the more stringent oversight of state parole agents.
In determining eligibility, the law considers only convicts’ most recent conviction — in the case of Doke, auto theft — and not prior offenses. And critics of the legislation, such as the Association of Deputy District Attorneys in Los Angeles, have pointed out that crimes including assault with a deadly weapon on a peace officer are considered to be a nonviolent offenses for the purposes of AB 109.
According to Los Angeles County booking records, Doke was being held without bail at the Glendora Police Department’s jail pending his initial court appearance, scheduled Tuesday in the West Covina branch of Los Angeles County Superior Court.
The law, as well as others aimed at meeting a federal mandate to reduce overcrowding in California prisons, has come under renewed scrutiny from critics in recent weeks after Whittier police Officer Keith Boyer was shot to death on Feb. 20, allegedly by a gang member with a lengthy criminal history who had been in and out of jail five times in the eight months prior to the deadly shooting.

PHOTO: Police arrested a wanted ex-convict and seized this handgun, along with methampetamine, heroin and marijuana, after approaching a Duarte man for illegally parking in a handicapped parking space outside an ampm minimart at 16000 E. Foothill Blvd. in Irwindale on Sunday, March 26, 2017. (Courtesy, Irwindale Polcie Department)