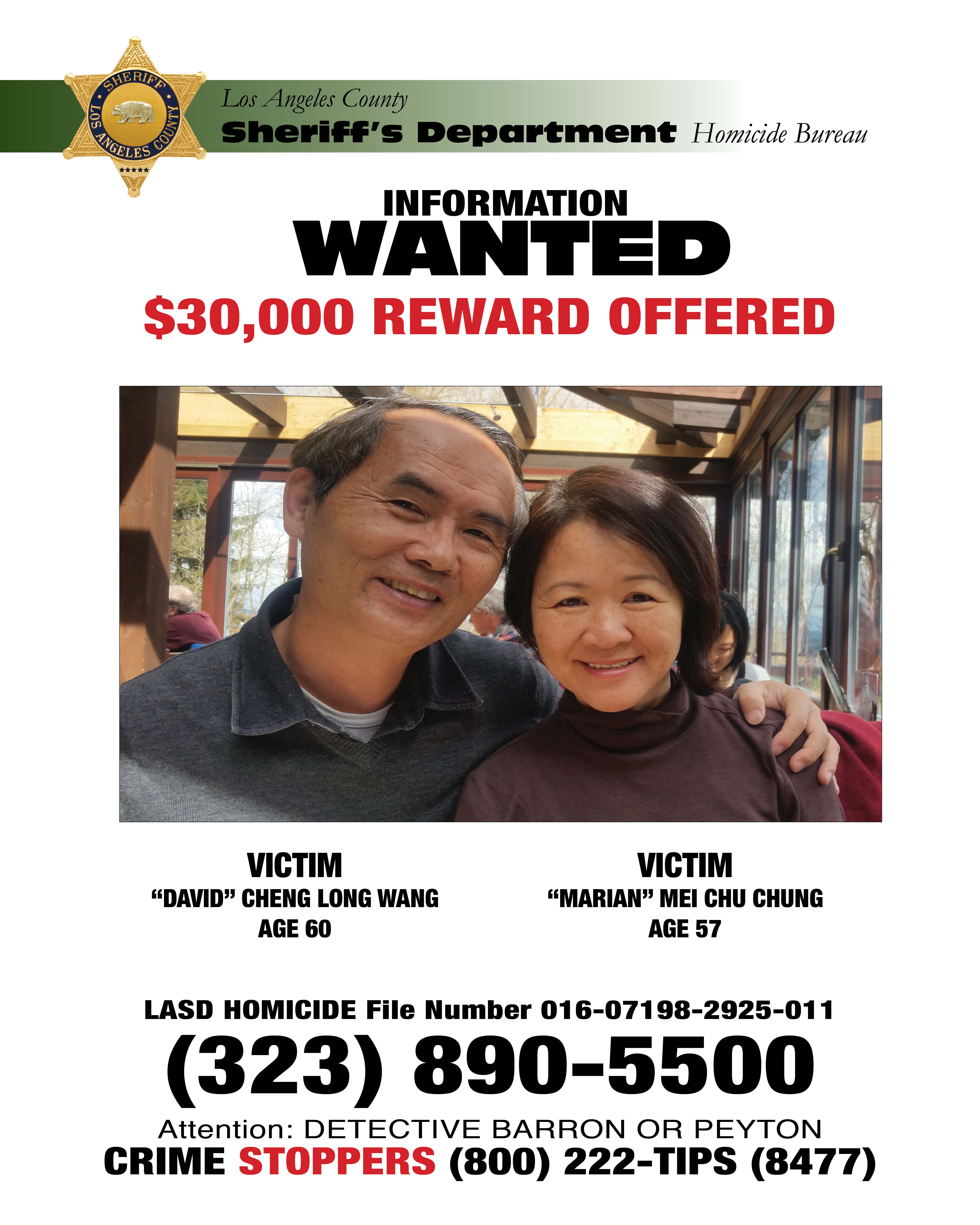 DIAMOND BAR >> County officials renewed a $20,000 reward this week for information leading to the capture and conviction of the person or people who “savagely” stabbed a Diamond Bar couple to death during an apparent home-invasion robbery last year.
A family friend who went to check on Chen “David” Long Wang, 60, and Mei “Marian” Chu Chung, 57, found them stabbed to death on Oct. 20, 2016, at their house in the 3300 block of Bent Twig Lane, according to Los Angeles County sheriff’s and coroner’s officials.
Between $10,000 and $15,000 in cash was believed to have been stolen from the couple’s home during the crime, Lt. Steve Katz of the Los Angeles County Sheriff’s Department Homicide Bureau said. He described the double-slaying as “savage” and “brutal.”
The case remains unsolved.
The Los Angeles County Board of Supervisors offered a $20,000 reward for information on the slaying in March. The reward west set to expire this week, prompting Supervisor Janice Hahn and the Board of Supervisors to renew the reward on Tuesday for another 90 days.
The $20,000 in reward money offered by the county is complimented by another $10,000 in reward money offered in the case by the City of Diamond Bar, for a total available reward of $30,000.
Wang was described by family and investigators as a retired computer programmer, and Chung was a retired teacher and art instructor. They are survived by two children, who are both medical doctors, and several grandchildren.
“If you have any information pertaining to the murder of Marian and David, I urge you to come forward. They deserve justice. Their children and grandchildren deserve answers,” Hahn said.
Anyone with information is urged to contact the sheriff’s Homicide Bureau at 323-890-5500. Tips may also be submitted
Anyone with information related to the murder should call sheriff’s homicide Detectives Margarita Barron or Dameron Peyton at (323) 890-5500. Tips may also be submitted anonymously to L.A. Regional Crime Stoppers at 800-222-8477.