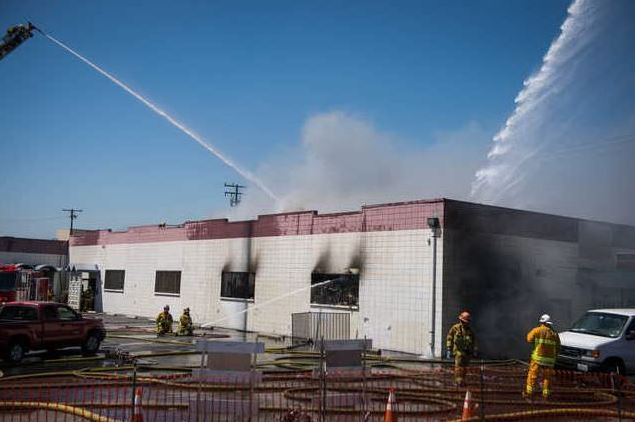 INDUSTRY >> A fire broke out in a commercial building in Industry on Friday afternoon.
The fire was first reported at 1:34 p.m. as a machine on fire inside a commercial structure in the 200 block of Puente Avenue, Los Angeles County Fire Department officials said.
The fire soon spread to the building itself, and firefighters declared a second-alarm fire, calling in reinforcements and assuming a defensive stance against the fire, which sent a thick, black plume of smoke into the sky above the San Gabriel Valley.
The flames were all but extinguished by 3 p.m., with firefighters working to douse lingering “hot spots” in the scorched 50-foot by 150-foot bulding, Inspector Joey Marron said.
Officials declared the fire “knocked down” at 3:42 p.m., according to Dipatch Supervisor Cheryl Simms.
One firefighter was taken to a hospital for treatment of a minor injury, she said.
The cause of the fire was under investigation.