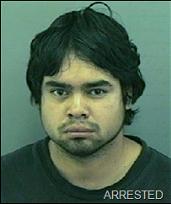 A judge sentenced a 28-year-old men to spend the rest of his life in a prison cell for fatally stabbing his then-14-year-old girlfriend’s grandparents to death as they slept in their bed in their Rosemead home nearly seven years ago.
A jury convicted Rodolfo Lopez late last year of two counts of first-degree murder, along with the special allegation of multiple murders for the Aug. 10, 2010, double-stabbing in the 4200 block of Arica Avenue, in which the elderly victims were stabbed more than 150 times, according to Los Angeles County sheriff’s officials and proscutors.
Jack Bezner, 71, and his wife Susan Bezner, 64, died in the attack, officials said.
Their granddaughter, then-14-year-old Sophia Cristo, lived with them. She carried out the attack with Lopez, then-21, after the grandparents discovered Cristo had been involved in a check forgery scam and threatened to notify authorities, according to Los Angeles County District Attorney’s Office spokeswoman Sarah Ardalani.
During Lopez’s appearance Friday in Los Angeles County Superior Court, Judge Craig Richman sentenced the killer to life in prison without the possibility of parole, court officials said.
Jurors convicted Cristo in March of 2015 of the murders of her grandparents.
The jury also found true the special circumstances of lying in wait and multiple murders, as well as the special allegation that she personally used a knife to stab her grandmother. Susan Bezner was stabbed 112 times during the grisly attack.
Though the couple was attacked as they slept in their bed, evidence indicated they fought for their lives before ultimately succumbing to their wounds, prosecutors said.
Investigators found and arrested Lopez and Cristo two days after the murders as they were driving the Bezners’ stolen SUV through Horison City, Texas.
Though the special allegation of multiple murders made Lopez eligible for the death penalty, prosecutors did not seek capital punishment in the case.
Cristo was ineligible for capital punishment due to her age at the time of the slayings.
Cristo also faces life in prison without the possibility of parole when she returns to court for sentencing on July 18.