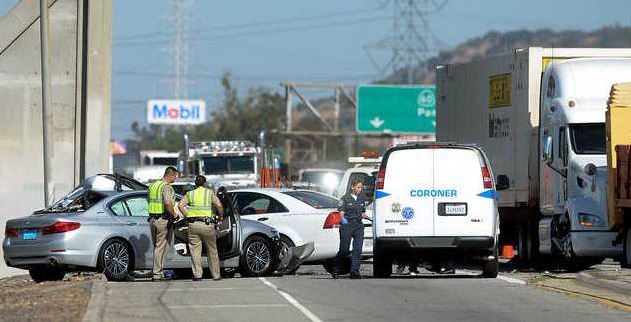 SOUTH EL MONTE >> A driver killed after her car crashed in to a disabled big rig on the 60 Freeway in South El Monte on Thursday has been identified as a 49-year-old Walnut woman, authorities said.
Tiffany Chiali Yi Ching died in the 1:40 p.m. crash along the westbound 60 Freeway, just east of Santa Anita Avenue, according to Ed Winter, assistant chief of operations at the Los Angeles County Department of Medical Examiner-Coroner.
She was at the wheel of a 2018 BMW heading west on the 60 Freeway at an unknown speed just prior to the crash, Officer J. Calder of the CHP’s East Los Angeles-area office said in a written statement.
Ahead of her was a tractor-trailer stopped along the right shoulder of the freeway, near the Santa Anita Avenue offramp, due to a mechanical breakdown, the officer said.
“(The BMW driver) made a turning movement to the right toward the Santa Anita Avenue offramp,” he said. “The BMW struck the right, rear corner of the stopped commercial trailer, continued in a westerly direction, collided a second time into the commercial trailer and the redirected to the north and came to rest on the right shoulder of the offramp.”
Paramedics pronounced Ching dead at the scene at 1:54 p.m., Winter said.
An autopsy determined Ching died from “traumatic injuries” and the death was ruled accidental, he said.
The big rig driver suffered no injuries, according to Calder.
Any witnesses, or anyone with information, can reach the CHP’s East Los Angeles-area office at 323-980-4600.