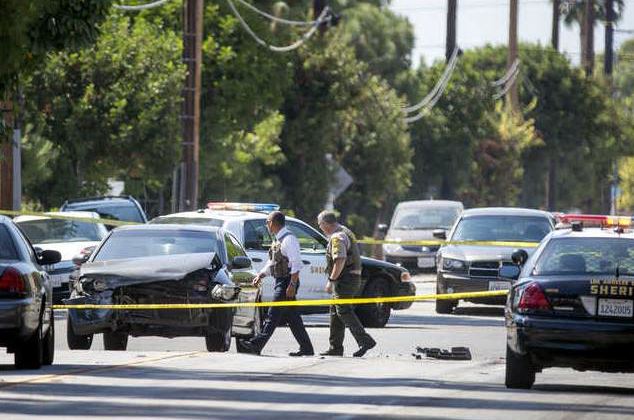 A car-to-car shooting on the border between Hacienda Heights and Industry left one man dead and another wounded on Wednesday afternoon, authorities said.
The deadly gunfire was first reported about 2:20 p.m. at Clark and Ridley avenues in Hacienda Heights, Los Angeles County sheriff’s officials said.
Bullets were fired from one white car into another, and possibly in both directions, Lt. Joe Mendoza of the sheriff’s Homicide Bureau said.
The other car continued traveling just over three-quarters of a mile before it collided with another, uninvolved car at Turnbull Canyon Road and Don Julian Road in Industry, according to the lieutenant. The second car sped away and was yet to be found.
“When deputies arrived there, that’s when they saw there was a victim inside one of the vehicles,” Mendoza said. “That victim was suffering from at least one gunshot wound to the body. That person was pronounced dead at the scene.”
The identity of the victim, who had been driving the crashed white sedan, was not available pending positive identification and notification of family. He was initially described only as a man.
A second man inside the car was also found to be suffering from gunshot wounds, Mendoza said. He was taken to a hospital for treatment. An update on his condition was not available.
A third person inside that vehicle fled from the scene and was detained a short distance away from where that vehicle collided,” Mendoza said.
Detectives detained the third man for questioning.
No description of the shooter or shooters was available. The vehicle being sought in connection with the shooting was described only as a white sedan.
It was not clear Wednesday whether the shooting was an attack or a two-way gun battle, Mendoza said.
Investigators said they could not confirm initial reports from the scene that casings from at least two different bullet calibers were found.
Deputies continued scouring the multiple crime scenes into Wednesday evening, bringing in a search dog to look for any discarded weapons.
Investigators determined the shooting was preceded by a “disturbance” reported just before the shooting on a residential cul-de-sac in the 15500 block of Ladysmith Street in Hacienda Heights, Mendoza said.
Further details regarding the circumstances of the incident believed to have led to the shooting were not available.
Mendoza said the shooting was believed to be gang-related.
It was not yet clear if the incident was an attack or a two-way gun battle.
A man and three young children who were riding in the car struck by the wounded driver were treated at the scene for minor injuries, Mendoza said.
Anyone with information is urged to contact the sheriff’s Homicide Bureau at 323-890-5500. Tips may also be submitted anonymously to L.A. Regional Crime Stoppers at 800-222-8477.