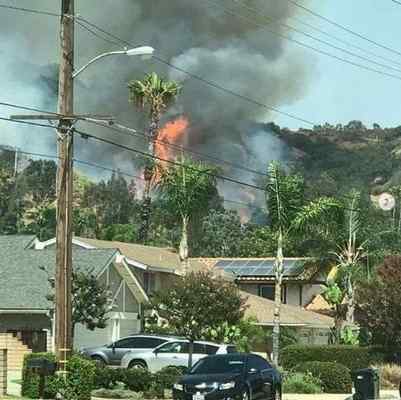 LA VERNE >> Police arrested a man Friday on suspicion of igniting a brush fire that scorched about 50 acres in La Verne and nearby unincorporated hillsides, officials said.
Christian Joseph Romano, 18, of La Verne was booked on suspicion of arson following his arrest about 4:20 p.m., according to La Verne police officials and Los Angeles County booking records.
He’s accused of igniting the Rodeo fire, which broke out shortly before 3 p.m. Sunday in the area of Briley Point Road and Williams Avenue, La Verne police Lt. Thomas Frayeh said.
No injuries or property damage were reported in the fire, which burned through about 50 acres of brush before it was contained by firefighters the following day.
•Related: Fast-spreading brush fire in La Verne burns 40 acres
Several neighborhoods were placed under voluntary evacuation orders as the flames crept close to homes, including those on Rodeo Lane.
As the investigation continued in the following days, investigators determined that the fire was an arson and identified Romano as the suspect, Frayeh said.
Romano was released from jail after posting $20,000 bail pending his initial court appearance, records show.
No further details were available.