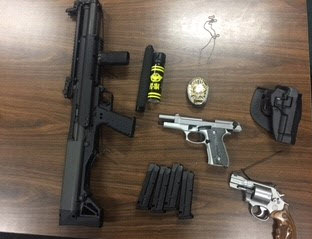 ROWLAND HEIGHTS >> Deputies who approached a man for a traffic violation last week ended up arresting him after discovering him with two loaded handguns, a shotgun, and expandable baton, pepper spray, a security guard badge and his brother’s ID in Rowland Heights, officials said.
Alejandro Raygoza, 25, of La Verne was arrested on suspicion of possession of concealed, loaded weapons during the incident, which unfolded about 8:20 a.m. on Aug. 24 along Fairway Drive near the 60 Freeway, Los Angeles County sheriff’s officials said Thursday in a written statement.
Deputies first approached a car after noticing it was impeding traffic, according to the statement. As they spoke with the driver, they noticed he had a handgun holstered on his waist.
“The driver claimed to be a security guard and handed the deputies an ID,” the statement said. “When the deputies questioned the driver about the ID they discovered he had handed them his brother’s ID and he is not licensed to carry firearms.”
Inside the car, deputies found an additional handgun, a shotgun and the other items, authorities said. It was not clear why the suspect was driving around with the weapons.