This from the Associated Press on the raging wildfires burning through Southern California:

A fire that ravaged the Sylmarcommunity in the hillsides above Los Angeles’ San Fernando Valley grew to 6,500 acres — more than 10 square miles — and was only 10 percent contained. It sent residents fleeing in the dark Saturday morning as notorious Santa Ana winds topping 75 mph pushed flames; torched cars, mobile homes and bone-dry brush.

“We have almost total devastation here in the mobile park,” Los Angeles Fire Capt. Steve Ruda said. “I can’t even read the street names because the street signs are melting.”

Gov. Arnold Schwarzenegger declared a state of emergency in Los Angeles, a day after he did so to the northwest in Santa Barbara County, where 111 homes burned to the ground Thursday night in the wealthy, star-studded community of Montecito.

And as many as 52 homes, some of them apparently mansions, were damaged or destroyed in a fire in Orange and Riverside counties, officials said. About 2,000 acres were charred, with more than 12,000 people in 4,500 dwellings under mandatory evacuation orders in Anaheim alone. Evacuation figures in other cities were no longer available.

The flames erupted in a stretch of Santa Ana River bottom near the 91 Freeway and quickly grew to at least 800 acres. Fierce, erratic winds pushed it into an adjoining subdivision, where 5,000-square-foot homes are the norm.

The Los Angeles blaze, whose cause was under investigation, threatened at least 1,000 structures, city Fire Department spokeswoman Melissa Kelley said. A burned resident was in serious condition, and four firefighters were treated for minor injuries.

Fire officials estimated 10,000 people were under orders to evacuate. Among them were residents of the Oakridge Mobile Home Park, where about 500 trailers were lost to the flames. Many had housed senior citizens. 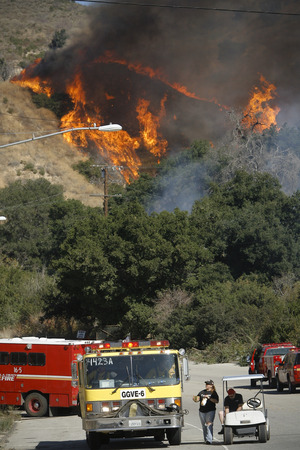 Some links for ongoing coverage:

The California Fire News blog has got pictures, maps and other informative tidbits

I just overheard this bit of news on the 10 o’clock FOX 11 local news segment.

(I apologize now for the sketchy details…I was not in the room when the piece came on and only caught the end of it)
Apparently, a woman who abandoned her son years ago when he was a baby asked to see him again and has now kidnapped the boy from his El Monte family. I believe the boy was around eight or nine years old and the mother reportedly told the family she was taking him because it was the only way to get money.
I should also say that the suspect is pregnant and apparently had other children taken away from her in another state. More details to come when we know more or when I can find a link to the news report.
It’s not up on any Web sites yet…
*********Here is the link to Fox’s piece on the story…

MONTEBELLO – A father and his 12-year old son were killed after being
shot Saturday night, officials said.
The victims, whose names were not released, died at the Beverly
Hospital emergency room, Monetebello police Sgt. Luis Lopez said.
They were two in a total of four victims involved in the shooting
incident, which took place just before midnight on Saturday in the
100 block of East Madison Street.
A third man was treated at the scene, and a fourth woman was taken to
Monterey Park Hospital for a gunshot wound, Lopez said. She was later
released.
Police released few details about the incident late Sunday, saying
they did not want to “jeopardize the on-going investigation.”
Authorities did confirm they had interviewed several witnesses in the
case.
Sorry we don’t have more but we just got this information not too long ago. I’m sure there will be a follow up on this Monday. This reminds me a lot of the father-son shooting in Baldwin Park last year that claimed the lives ofPedro Estrada andJose Luis Estrada.
These homicides round out a weekend of death in the San Gabriel Valley. A man was shot and killed in unincorporated Azusa and another man was shot dead in Rowland Heights this past weekend as well.
More to come.

SAN DIEGO — A man and woman believed to be two-thirds of a violent bank-robbing crew dubbed the “Boricuas Bandits” were captured Wednesday, police said.

Authorities arrested Michael Caldera, 21, of Rialto, and Elizabeth Lugo, 20, of Ontario, in the San Diego area, according to Upland police.

The third suspect remains at large.

The pair is suspected of robbing at least six area banks and two check-cashing stores, including a Walnut bank, in recent months, in what the FBI has called “violent takeover-style” robberies.

“Boricuas” is a vernacular term used to describe a Puerto Rican. The FBI chose that moniker because it is what the robbers call each other on surveillance footage.

Police said Caldera assaulted an officer while being arrested Wednesday and tried to escape, but was finally taken into custody.

Two down, one to go.

I just finished talking to Julie Sokolowski, the bride whose wedding party was transported out of Sturdevant Camp in the Chantry Flats area earlier today via helicopter.

Sokolowski told me her stepfather, Chris Kasten, has been managing the camp – four miles from the Chantry Flats Ranger Station – for 17 years and is still up there with his wife. They opted to stick the fire through.

Sokolowski and her husband, Ken Grady, tied the knot on Saturday at 3 p.m., about the same time the Santa Anita Fire started. No one in the wedding party knew about the blaze until Saturday evening.

By noon today, the entire wedding party – 45 people and four pets – were evacuated from the area.

“We didn’t think there was any threat to us,” she said. “We went on like normal and then this morning, we were all having breakfast and they told us search and rescue was on their way.”

We’re hearing that a wedding party of about 50 people who were stranded about 3.5 miles from the Chantry Flat Ranger Station have been rescued.

They have been transported out of the area via helicopter. No one was injured.

We’re still not quite sure how they got there or if they were there before the broke out, but we’ll update when we have more details.

The Sierra Madre city Web site is reporting about 200 homes have been evacuated. Here is a list of two sites where displaced residents can go:

If you haven’t checked it out already, the Web site is a good resource for info. The last update was at 6:30 this morning.

I got a call from Patricia Flood today, program manager at Stepping Stones Recovery Center in Covina.

Why does this matter? Well Virgil Cleon Harper, who is facing child molestation charges amid allegations he inappropriately touched nine students at Azusa’s Powell Elementary School, is on the board of Stepping Stones for Women.

The two organizations may share like names and may be located in the same city, but they are defintely not the same. Harper’s group is on Arrow Highway, while Flood’s center is on Cypress Street.

So if you are somehow affiliated with the recovery center, no need to worry, we’re talking about that other Stepping Stones place.

We’re just hearing over the scanner that Irwindale PD are working a possible shooting between two employees. It happened near Schabarum Ave and Durbin Street according to scanner chatter, and apparently one employee shot another employee then fled the scene. The shooting victim was apparently only grazed in the leg.

Reporter Brian Day is trying to get more info.

I bet this Industry manager never saw this coming:

INDUSTRY – An employee in the process of being fired stabbed his boss with a pocket knife Friday, authorities said.

The incident was reported about 1 p.m. at a trucking business in the 900 block of Azusa Avenue, said Los Angeles County sheriff’s Sgt. Paul Puchalski.

The employee, 39-year-old Zhang Lie of Hacienda Heights, was booked on suspicion of assault with a deadly weapon, Puchalski said.

His boss, a man in his mid-40s, suffered two stab wounds to his arm from a small pocket knife, he said.

Puchalski said the boss was hospitalized with non-life-threatening injuries.