ROSEMEAD >> Two men and a woman attacked a man with a rock and robbed him along Valley Boulevard late Thursday, officials said.
The crime unfolded about 9 p.m. at Valley Boulevard and Bartlett Avenue, Los Angeles County sheriff’s Deputy Brian Vance said.
The trio of suspects approached the victim and asked for money, according to the deputy. “When he didn’t provide it, one of the males threw a rock at his face.”
Vance said the suspects rifled through the man’s pockets when he fell to the ground. They helped themselves to about $200 before fleeing.
Witnesses at nearby Jim’s burgers called 911.
“(The victim) had a laceration,” Vance said. “He was bleeding, but he refused medical attention.”
He also declined to provide deputies with a description of the suspects, Vance said.
Anyone with information can reach the sheriff’s Temple City Station at 626-285-7171. Tips may also be submitted anonymously to L.A. Regional Crime Stoppers at 800-222-8477.

INDUSTRY >> A man attacked and robbed a woman as she walked along a pedestrian pathway in Industry late Friday, officials said.
The woman was walking along a trail near the intersection of Temple and Azusa avenues about 7:30 p.m. when the robber approached, Sgt. D. Contreras of the Los Angeles County sheriff’s Industry Station said.
The suspect demanded money and punched the woman in the face and shoulder, he said. The robber managed to steal about $200 from the woman and fled.
Contreras said the victim did not wish to be taken to a hospital.
A detailed suspect description was not available.
Anyone with information can reach the sheriff’s Industry Station at 626-330-3322. Tips may also be submitted anonymously to L.A. Regional Crime Stoppers at 800-222-8477.

AZUSA >> Police jailed a domestic violence suspect already wanted for violating the terms of his AB109 felony probation after he led them on a chase in a pickup truck on Tuesday afternoon, authorities said.
David Daniel Delgado, 28, of Azusa was ultimately booked on suspicion of domestic violence, evading arrest and resisting arrest, as well as in connection with the pre-existing arrest warrant, according to Azusa police Sgt. Xavier Torres.
Police had been seeking him since Oct. 20, when officers investigated the alleged beating of a woman by her boyfriend, resulting in cuts, bruising and swelling to her face, Torres said. But the suspect was not immediately found.
“Officers learned that Delgado was on Post-Release Community Supervision from a prior criminal offense, and that a no-bail warrant has been issued for his arrest for violating the terms of his early release, Azusa police said in a written statement.
Officers from the San Gabriel Valley East AB109 Task Force began hunting for Delgado, Torres said. They spotted him about 4:50 p.m. on Tuesday driving a work truck in the area of Cerritos Avenue and Newburgh Street in an unincorporated county area just outside of Azusa.
Delgado led officers on an 20-minute chase that came to an end when police used a Pursuit Intervention Technique, or PIT, maneuver to stop the fleeing truck, police said.
“Delgado’s reckless driving clearly exhibited a willful disregard for the safety of others,” according to the police statement.
The suspect continued fleeing on foot after police disabled his truck but was soon chased down and captured, officials said.
According to county booking records, Delgado was being held without bail pending his initial court appearance, scheduled Thursday in the Pomona branch of Los Angeles County Superior Court.
Under AB109, also known as California’s Public Safety Realignment of 2011, allows convicts convicted of “non-violent, non-serious, non-sexual” felonies to serve their sentenced in county jails, rather than state prisons, and be supervised by county parole officers upon their release, rather that state parole agents.
Details regarding Delgado’s previous conviction were not available Wednesday due to technical issues affecting Los Angeles County Superior Court records. 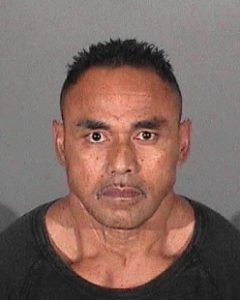 EL MONTE >> An armed federal fugitive sought by the U.S. Marshals Service attacked a police officer in El Monte before leading officers on a motorcycle chase and ultimately being arrested on suspicion of a laundry list of crimes Saturday, authorities said.
George Olotoa, 50, of South El Monte is accused of assault on a police officer, evading police, possession of a stolen handgun, possession of a firearm by a convicted felon, possession of drugs while armed and possession of drug paraphernalia, according to El Monte police Sgt. Roger Cobian.
Olotoa was riding a 2000 Suzuki Sport Bike in the 2600 block of Millet Avenue when an officer tried to stop him for a traffic violation, Cobian said.
As the officer approached Olotoa, he tried to ride away, police said. The muscular 6-foot-tall, 230-pound suspect turned violent.
“The officer tried to stop the suspect but the suspect attacked the officer by striking him in the head,” Cobian said in a written statement. “The officer attempted to defend himself and overcome the violent attack while the assailant was still wearing a motorcycle helmet. The officer deployed his Taser, which malfunctioned, and the suspect fled on his motorcycle and a vehicle pursuit began.”
The officer chased Olotoa onto the 60 Freeway at Santa Anita Avenue, where he lost control of his motorcycle and fell, officials said. The motorcycle struck another car, resulting in no injuries to the driver.
“The suspect attempted to re-mount his motorcycle, and he disregarded commands to remove his hand from his front pants pocket,” Cobian said. “When the first of the assisting officers arrived on scene, he saw a volatile situation rapidly evolving and assisted in apprehending the suspect.”
Cell phone video footage of the incident posted on YouTube Saturday afternoon, but removed by Saturday evening, depicted suspect’s apprehension.
The arriving officer struck Olotoa’s motorcycle with his patrol car as he arrived on scene, pushing it out of his grasp, the video shows.
Officers then continued wrestling Olotoa into custody as additional officers arrived at the scene.
As assisting officers got Olotoa into handcuffs with the use of a Taser, the original officer collapsed backwards onto the street in exhaustion.
“A folding knife was found in the same pocket the suspect had his hand in and a loaded, stolen hand gun was found in the suspect’s backpack,” Cobian said.
Both the officer and suspected were treated for injuries described as minor.
Police determined Olotoa was on federal probation and was being sought by the U.S. Marshals Service, officials added.
He was being held in lieu of $225,000 bail pending his initial court appearance, scheduled Wednesday in El Monte Superior Court.