This from CNN. Radar Online had the story first:

London said the kidnappers forced him to “use illegal drugs,” according to a Palm Springs Police statement.

London, 37, is known for his television work, including five seasons as Griffin Holbrook on the hit series “Party of Five.”

The actor told police that “several men” approached him as he was changing a flat tire on Friday, according to the the police statement. After they helped change the tire, London offered them a ride home, police said.

Bill Hetherman, a former SGV Tribune court reporter, stumbled across a civil case involving actress Sharon Stone. There was just one problem, court records make it appear as if the case doesn’t exist.

Clearly this is anothe rexample of how celebrity in Los Angeles trumps the rights of the public and legal protocol. Alan Parachini, the court spokesman, and former ACLU flack, doesn’t outright defend the secrecy, but he refused to say if other such cases were buried in court files somewhere.

Here’s the story from this morning’s Los Angeles Times.

The case probably would have gone unnoticed into the archives had a reporter for City News Service not had a slow February day in the civil court. Bill Hetherman said that because his schedule was free, he decided to attend a relatively small-potatoes hearing — the matter of attorneys’ fees in a sex discrimination case against Costco — in Duffy-Lewis’ court. While he was waiting, the judge called another case.

“All of a sudden I heard the name Sharon Stone and paid closer attention,” he said.

Hetherman said that after a whispered conversation with Jacobson’s attorney at the bench, the judge set a date a month later for the hearing.

Hetherman said he tried to find information about the case in the court database and later from the attorneys and court officials, but repeatedly was told it was sealed. The reporter said the next hearing included a hushed discussion between the judge and a lawyer for the actress and then a statement on the record that suggested the case was over.

The
Los Angeles Superior Court panel went behind closed doors again
Wednesday, it’s sixth day of work since getting the case on March 26.

Spector
is accused of second-degree murder in the 2003 shooting death of
actress Lana Clarkson. The defense contends she killed herself.

Spector’s first trial ended in 2007 with a 10-2 jury deadlock. The majority favored conviction.

The panel took a break last week after one of the juror’s fell ill on Wednesday.

The 69-year-old Spector is accused of second-degree murder in the gunshot death of actress Lana Clarkson on Feb. 3, 2003. Clarkson was fatally wounded inside Spector’s Alhambra mansion.

Did you catch the story about former NFL running back Travis Henry?

You might say he’s the male version of Whittier’s own Octomom – except he’s going to be paying a steeper price for fathering nine children than Nadya Suleman will ever pay for giving birth to 14.

Henry, who played for three NFL teams including the Buffalo Bills, Tennessee Titans and Denver Broncos was recently ordered to pay $3,000 a month for one of the kids. Additionally he fell $16,000 behind in support for another.

Clearly the child support amounts were determined by the size of Henry’s final contract with the Broncos. In 2007 the team gave Henry a five-year, $25 million contract.

By the time he was cut last year, Henry had received just $6.7 million, according to the New York Times.

Because of positive drug tests and an arrest for drug trafficking, there’s little chance Henry will ever play in the NFL again.

As “baby daddy” to nine children from nine separate women, Henry went to court seeking a reduction in the amount of child support he would have to pay. Some of the “baby mommas” and their attorneys say no way. They point to the shear amounts of money Henry reportedly squandered on cars, clothes and other women.

But is he any more irresponsible than Octomom?

I say no. At least Henry appears to have made some effort to support his kids. Suleman on the other hand has been relying on taxpayers to support her and the brood.

Octomom used a combination of food stamps, disability payments and student loans to provide for her first six kids;

She lived with her mother in a home that was nearing foreclosure;

Knowing this Nayda nonetheless decided to have herself implanted with six frozen embryos and brought eight fatherless children into the world on Jan. 26.

I highly doubt she had any intention of paying for these kids on her own. After all, estimates for the monthly care of Octomom’s sickly brood run hundreds of thousands of dollars per month.

Where’s the outraged judge in this case, threatening to lock Nadya up for having kids she can’t support?

Where’s the Department of Children and Family Services that intrude into the lives of so many other Angelenos?

Does anyone think that Dr. Phil or RadarOnline, or Gloria Allred are going to stick around once the audience dries up and the ratings dwindle?

Does anyone believe for a second when these media whores say their interest is motivated solely out of compassion for the children?

I hope not. Because you can guarantee the next time Paris or Lindsay or Britney or Rhianna or some woman who has nine babies and a brood of 15 turn up, the cameras and the money will be gone.

For now, unlike a washed up former NFL running back, the Nadya freak show makes money. But eventually (like it did in Henry’s case) the money’s going to run out and we’ll be on the hook for supporting those kids and their shiftless mother.

Let’s hear it for double standards.

This comes from the Associated Press:

Anna Nicole Smith’s lawyer-turned-boyfriend and a doctor surrendered to face charges that they conspired to provide the Playboy Playmate with thousands of prescription pills before her 2007 fatal overdose. A second doctor also is accused.

For booking photos of Stern and Kapoor, go to http://whittierpd.blogspot.com.

Stern and Kapoor were booked by the Whittier Police Thursday night. They each paid $20,000 bail and were released at 9:15, Zuhlke said.

Why the pair were booked in Whittier was not immediately clear.

Dr. Khristine Eroshevich was expected to surrender Monday. Her attorney, Adam Braun, acknowledged Eroshevich wrote some of the prescriptions using fictitious names for Smith, but it wasn’t intended to commit fraud.

On March 12th, 2009, Sandeep Kapoor(bottom) and Howard K. Stern(top) were booked at the Whittier Police Department at 7:13pm and 8:27pm, respectively. Both men were booked on warrants on behalf of the California Attorney General’s Office and released on $20,000 bail at 9:15pm. This represents the extent of the Whittier Police Department’s involvement in the case and any further inquiries may be directed to the Attorney General’s Office, specifically, Scott Gerber at (510) 502-3755 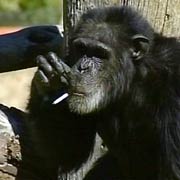 A Chimp in the news? Usually it’s onetime West Covina resident Moe, who has been missing since last summer.
This time it’s Travis, a Hartford, Conn. chimp who once acted in Old Navy and Coca-Cola commercials. The 200-pound animal mauled a woman before he was shot to death. He was 15-years-old

Spotted this on Newsmax:

Eardley claims in court papers that, without due process, Spears is being confined by the conservator to the private prison of her own home, and he contends that this is a violation of her civil rights.

After Britney twice spent time in a psychiatric ward, Superior Court Commissioner Reva Goetz placed her in a temporary conservatorship under her father Jamie and his attorney, Andrew Wallet. The order will continue until a scheduled hearing on March 10.

It also says Paris Hilton didn’t get preferential treatment. The report, released this afternoon by the OIR goes into a wide variety of other topics regarding the Los Angeles County Sheriff’s Department.

It’s funny how we focus on the celebrity aspects of a report like this and miss some of the more important details. A whole section of the report deals with in custody deaths and while it is entirely without names…there is a curious entry on page 24:

C A S E A 76-year old inmate went down in a dorm at North County Correctional Facility and
subsequently died. He had been seated on his lower bunk and, when he tried to get up,
he fell and struck his head on the floor. While being treated for the resulting laceration,
he complained of chest pains and was transported by ambulance to the hospital, where
he was treated for various ailments, went into cardiac arrest, and died three days later.
An NCCF sergeant interviewed several inmates assigned to bunks near the deceased
inmates. All said that the inmate had been in poor health, and none noted anything
unusual about the fall or the circumstances surrounding it. Even though the facts
suggested this elderly inmate died from natural causes, because the deceased inmate had
gained notoriety for his role in the murder of an LAPD officer decades earlier, both
Homicide and IAB investigators responded to the scene to insure there was no suspicious
activity. The on-call OIR attorney likewise rolled out. In the end, the coroner determined
the inmate had died of natural causes. However, the case did raise the issue of
whether this particular inmate, given his age and background, should have been housed
in a more appropriate location than a general population dormitory. Housing older
inmates is an ongoing problem for the jails, and the LASD used this case as an occasion
to renew its efforts to create specialized old man dorms or housing units.

Obviously this refers to Jimmy Lee Smith, one of the infamous Onion Field Killers.

I plan on linking to the complete report in a post later today.