UPDATE: Investigators determined the report of a kidnapping was false. The involved person may have psychiatric trouble, per officials.

A man was rescued from the trunk of his car near Crystal Lake early Sunday after being carjacked and kidnapped in Chino, authorities said.
U.S. Forest Service officials discovered the man, estimated to be about 30 years old, about 9:30 a.m. in the trunk of his car which was parked along San Gabriel Canyon Road near Crystal Lake, Los Angeles County sheriff’s Deputy Rob Upham said. He was taken to a hospital with unknown injuries, though he was conscious and able to speak with investigators.
The investigation into the incident remained in it’s early stages, however the man indicated he was carjacked in the area of Riverside Drive and Central Avenue some time after 8 p.m. Saturday night, Upham said.
Sheriff’s deputies secured the scene in the forest and turned over the investigation to Chino police.

WALNUT — A Chino man suffered major injuries and is suspected of drunken driving after rear-ending a big rig on the 60 Freeway, which then fled the scene early Saturday, authorities said.
Christopher Oviedo, 20, was arrested on suspicion of drunken driving and hospitalized in stable condition following the 6 a.m. crash on the westbound 60 Freeway, just east of Fairway Drive, California Highway Patrol Officer Adam Christopher said in a written statement.
He was driving a 2000 Jeep Cherokee at an unknown speed in the No. 3 lane prior to the crash, the officer said. A big rig was traveling ahead of Oviedo in the No. 4 lane.
“For an unknown reason, Mr. Oviedo turned his car to the right and entered the No. 4 lane where it collided with the rear of the big rig,” Christopher said.
The Jeep spun out of control and ended up crashing into the metal guardrail along the north side of the freeway, he said. He became trapped in the vehicle and had to be freed from the wreckage by Los Angeles County firefighters.
Oviedo, who was not wearing a seat belt, suffered “major facial injuries,” in the crash.
A description of the big rig was not available.
Witnesses were encouraged to contact the Baldwin Park office of the CHP during normal business hours at 626-338-1164. After hours, the CHP can be reached at 323-982-4900. 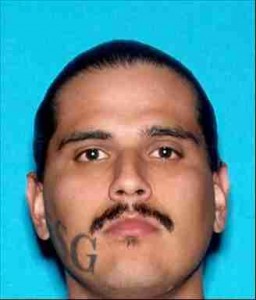 MONTEREY PARK — Police are seeking a wanted parolee and a second man in connection with a series of auto break-ins targeting the cars of parents as they drop their children off at San Gabriel Valley day care centers, authorities said.
Brian Gilbert Renteria, 25, and Jerry Angelino Ristich, 27, have been linked to three such burglaries at Alhambra day care centers in January and February, and were being investigated in connection with additional crimes in other cities including Arcadia and Chino, Monterey Park police Lt. Carrie Mazelin said. Renteria is described as a transient believed to be staying in San Gabriel Valley motels, while Ristich is a Monterey Park resident.
Renteria, who has previously been convicted of kidnapping, has absconded from parole supervision and is considered armed and dangerous, officials said.
An alleged accomplice of the men, 20-year-old Tamara Rios of West Covina, was arrested Feb. 13 in connection with one of the auto burglaries, which took place in the 300 block of North Alhambra Avenue, according to Monterey Park police and Los Angeles 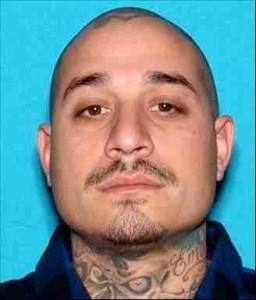 The FBI is offering a $50,000 reward for information leading to the capture of a “heavily armed and dangerous” serial bank robber known as the AK-47 Bandit, who began his multi-state criminal career with a Chino bank heist in which he shot a police officer.
The reward for the robber was increased from $20,000 to $50,000 following what was believed to be his his fifth crime Wednesday in Idaho, according to FBI spokeswoman Laura Eimiller.
The bandit earned his moniker because of the weaponry he has carried during the crimes — an AK-47 style rifle fixed with a large drum magazine. He’s also been seen wearing a black ski mask, body armor and a vest emblazoned with the word, “Sheriff.”
“This suspect is considered heavily armed and dangerous, and individuals who may come into contact with him are advised to contact law enforcement immediately and refrain from taking independent action to apprehend the suspect,” Eimiller said.
In Wednesday’s heist in Rexburg, Idaho, the bandit ordered employees and customer into a vault while brandishing his trademark weapon, FBI officials said.
The AK-47 Bandit has also been linked to a Vacaville bank robbery on March 12, a North Bend, Washington robbery on July 6 and a failed March 9 heist at a Sacramento bank.
FBI officials described the bandit as a white man between 25 and 40, about 5 feet 10 inches tall, 180 to 220 pounds and of stocky build. In addition to his body armor and sheriff’s vest, the robber has been seen wearing a black coat with a hood, black gloves and baggy Levi jeans during the crimes.
At least three different getaway vehicles have been reported in connection with the robberies.
In the Chino robbery, which is believed to be the first in the spree, someone called police to make bomb threat at the south end of town, Chino Police Chief Miles Pruitt said in the days following the heist and shooting.
The call was made from a pay phone in the vicinity of the bank, Eimiller said.
“Investigators believe the suspect employed a diversionary tactic in an attempt to delay officers responding to the Chino bank robbery,” she added.
It was not clear if the bomb threat was made by the bandit himself or an accomplice.
Recognizing the bomb threat may have been a distraction, other patrol officers also began checking on local banks, Pruitt said.
A Chino patrol officer spotted the assault rifle-wielding bandit exiting the California Bank & Trust about 10:50 a.m., officials said.
The bandit immediately opened fire, striking his patrol car numerous times and wounding the officer, Pruitt said.
The officers was seriously wounded, though the injury was not life-threatening, police said. He remains on light duty as a result of the injury.
Anyone with information regarding the AK-47 bandit is asked to contact their local FBI office or call 9-1-1 immediately.

CHINO HILLS – A Lake Elsinore man died early Saturday morning on the 71 Freeway shoulder after he waited for a tow company inside his disabled Toyota Yaris and another vehicle rear-ended the car.
Dallas Dunn, age 57, was pronounced dead from his injuries at 1:09 a.m. Saturday after being transported to Chino Valley Medical Center in Chino, according to a written statement from the San Bernardino County Sheriff-Coroner Department.
Dunn drove his car to the right shoulder of the 71 Freeway north of Butterfield Rancho Road after it sustained vehicle trouble Friday night, according the statement.
The 57-year-old waited inside of his 2009 Toyota after calling a tow company for help, officials said.
While the Lake Elsinore man waited, another vehicle that was driving on the southbound freeway drifted on the right shoulder and hit the back of the Toyota.
The collision caused the parked vehicle to overturn.
California Highway Patrol officials, who are investigating the crash, responded to the two-vehicle incident about 11:10 p.m. Friday.
– Wes Woods II

CHINO — Authorities say a man who was hit in the head with a golf ball at a Southern California country club has died.
The San Bernardino County coroner’s office said on its website Sunday that 69-year-old Hiroshi Tango of Brea died at a hospital Saturday.
On Oct. 7, Tango was playing golf at Los Serranos Country Club in Chino when he was hit in the head by a ball.
The coroner says he complained of head and neck pain after he was hit and he was taken to Loma Linda University Medical Center, where he “succumbed to his injuries” on Saturday, nine days after he was struck by the stray ball.

CHINO HILLS — A 19-year-old man has been killed after he was run over by two vehicles following a fight in Chino Hills.
Authorities say Raymond Jimenez died at a hospital early Saturday after witnesses say a van and a sedan hit him. San Bernardino sheriff’s deputies had responded to the area because they received a report of people fighting in the street.
No arrests have been made.