GLENDORA >> A Claremont man is accused of manslaughter, DUI and hit-and-run after he crashed his car into a parked car early Thursday, killing a man who was working under the hood, authorities said.
Mark Stephen Gagliardi, 29, was jailed in connection with the 10:10 a.m. crash along Grand Avenue, just north of Arrow Highway, according to Glendora police officials and Los Angeles County booking records.
The victim, a 59-year-old Glendora man whose name was not available, was working on his car, which was parked along the east curbline of Grand Avenue, prior to the crash, Glendora police Cpl. Bill Lee said.
Gagliardi was northbound on Grand Avenue when his Scion xB veered toward the side of the road and rear-ended the victim’s parked vehicle, according to the corporal. The impact pushed the victim’s vehicle forward, crushing him between his own vehicle and another vehicle parked in front of it.
Paramedics treated the badly injured man at the scene and took him to a hospital, where he succumbed to his injuries a short time later, Lee said.
The driver, later identified as Gagliardi, tried to drive away, Lee said. But his car, which was damaged in the collision, broke down less than half a mile away. Officers arrested him without a struggle.
Gagliardi was ultimately booked on suspicion of vehicular manslaughter, DUI and felony hit-and-run, Lee said.
According to county booking records, Gagliardi was being held in lieu of $136,000 bail pending his initial court appearance. 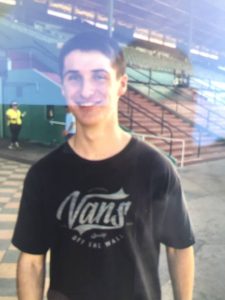 TEMPLE CITY >> Sheriff’s officials asked the public’s help Thursday in finding a 17-year-old boy who went missing in Temple City.
Sterling Williamson was last seen about 6:30 p.m. Wednesday on Birchland Place in Temple City, Los Angeles County sheriff’s officials said in a written statement.
“The missing juvenile takes anxiety and antidepressant medication,” according the statement. “Possible areas of travel are Claremont where Williamson used to live, or Sierra Madre where his grandparents reside.”
He’s described a white, 5 feet 11 inches tall, 155 pounds, with green eyes and black hair.
Anyone with information can reach the sheriff’s Temple Station at 626-285-7171.

LA VERNE >> La Verne police arrested a man and three teenagers early Sunday accused of a crime spree including an armed carjacking in La Verne, as well as armed robberies in La Verne, Pomona, Claremont and Upland in recent days.
Officers arrested Edwin Miguel Garcia, 18, of Pomona, and three teenage boys from Pomona were arrested in connection with the series of crimes after tracking them down in Pomona about 2:30 a.m., according to La Verne police officials and Los Angeles County booking records. Officials withheld the names of the juvenile suspects due to their age.
A man called police just before 11 p.m. Saturday to report being robbed and carjacked outside the Shogun Restaurant, 2123 Foothill Blvd. in La Verne, La Verne police Sgt. Sam Gonzalez said.
“Upon arrival, officers received information that three armed suspects demanded money and a cellular phone from the victim before forcibly taking his vehicle and fleeing the scene,” Gonzalez said.
A short time later, police received a second call from a bicyclist reporting he had been robbed by a group of young men in the 1900 block of Dover Way, police said.
“A preliminary investigation revealed the same subjects from the earlier carjacking were also responsible for the incident on Dover Way,” Gonzalez said.
Police found the four suspects in the area of Towne Avenue and the 10 Freeway in Pomona, Gonzalez said. Officers arrested them without a struggle.
They were found with the carjacked car, as well as a second car that had been reported stolen.
“Upon further investigation it was discovered the suspects arrested were responsible for similar crimes in the cities of Claremont, Pomona, and Upland,” Gonzalez said.
All of the crimes took place within recent days, he added.
In addition to the two stolen cars, the suspects were in possession of a loaded gun, two replica guns, stolen property and drugs, Gonzalez said.
Garcia was being held in lieu of $200,000 bail and the La Verne Police Department’s jail pending his initial court appearance, records show.

WHITTIER >> Police found a missing 15-year-old Whittier teen safe in Claremont Friday, officials said.
The boy was reported missing by worried family members Oct. 9 after he failed to show up at school after leaving his Uptown Whittier home, according to police and family members.
Detectives located the teen in Claremont, Whittier police officials said in a written statement.
“(The boy) said he got to Claremont using a bus and was staying with some people he met,” according to the statement. “He said he left because he didn’t want to stay at home anymore. He is in good condition.”
The teen and his family were reunited.

WEST COVINA >> A jury convicted an Oakland man Thursday of luring a teenage girl from home and forcing her to work as a prostitute throughout Southern California last year, as well as pimping a woman in El Monte in 2012, authorities said.
Rufus McNeely, 37, faces up to 30 years to life in prison when he returned to West Covina Superior Court for sentencing Sept. 17, according to Los Angeles County District Attorney’s officials.
He will also be required to registers as a sex offender for the rest of his life, district attorney’s office spokeswoman Sarah Ardalani said.
The jury deliberated for less than three hours before finding McNeely guilty of human trafficking of a minor for a sex act, pandering by procuring a minor over the age of 16 and pimping, officials said.
“In September 2013, the defendant met a 16-year-old girl and lured her from her home in Oakland,” district attorney’s officials said in a written statement. “As they drove through California, McNeely made the teenage girl prostitute in Los Angeles, San Bernardino and Ventura County.”
The girl eventually called authorities, and a multi-agency law enforcement task force arrested McNeely Oct. 2, 2013, in Claremont, according to district attorney’s officials and Los Angeles County booking records.
When McNeely was arrested, he was already the subject of an El Monte Police Department investigation for pimping a woman in that city in 2012, district attorney’s officials said.
“Based on McNeely’s involvement with the teen and new evidence, officials had enough to also charge him in connection with the previous crime,” according to the district attorney’s office statement.
Prior to his conviction, McNeely had been held in lieu of $325,000 bail, records show.
The Claremont and El Monte police departments took part in the investigation, along with the Los Angeles County Sheriff’s Department and U.S. Immigration and Customs Enforcement.

“He’s where he wants to be voluntarily,” Claremont Police Lt. Paul Davenport said.
Sahl’s wife told police Friday she hadn’t seen her husband since Tuesday May 6. They began a manhunt that included several interviews with Sahl’s associates.

Sahl, who lives in Claremont was reported missing on Tuesday.
A Glendora man said he was questioned by police in connection with the case Friday night at his home. The man said he never met Sahl.
Claremont Police Lt. Davenport confirmed the investigation is ongoing. Davenport provided no particulars.
*Here’s more details from Lt. Paul Davenport of the Claremont Police Department:
“We took a report (Friday) early evening,” Davenport said. “He was last seen on May the 6th at that time he was with an acquaintance named Michael Willman. We sopke to a colleague of Mr. Sahls yesterday evening who had just spoken to Mr. Sahl on the telephone and was unaware he had been reported missing. He appeared to be where he was voluntarily. “We attempted to call him back, but until we speak to him directly we will continue to show him as a missing person.”
Davenport said there was no indication of a family dispute prior to Sahl’s disappearance. He said Claremont investigators were unaware of any illness that may have contributed to the disappearance.

Until his April 2 arrest, John Floyd Thomas Jr was a Los Angeles insurance adjuster. Police now call him the “Southland Strangler” — named for the geographical section of Los Angeles County where they suspect he killed at least 30 women and raped many more. Thomas is also in the frame for a spate of crimes police say were committed by the “Westside Rapist”.

On first glance this suspect doesn’t fit the profile of the Grim Sleeper. Reports suggest he targets much older females who live alone and are white. This is a direct opposite of the Grim Sleeper’s known victims – young and black. However there are some striking similarities that are worth mentioning.

Many of Thomas’ victims were strangled and beaten and at least one victim was killed in a location other than her home which suggests Thomas’ MO is markedly varied. The LA times is quoted as saying “On the 17 who were killed, he placed pillows or blankets over their faces.” This is also a signature of the Grim Sleeper who is known to have placed items over the faces of some of his victims.

.Perhaps one of the most startling similarities is the time span and ‘gaps’ that separate Thomas’ crimes. The first wave of slayings took place in Los Angeles in the mid-1970s. There followed a decade of ‘Sleep?’ until 1983 when Thomas was released from prison. He committed rape and murder over the next 6 years until 1989.

The site also has an interesting map, developed with the help of a profiler who notes that

“the Grim Sleeper attacks women within one mile from his home, and works to blend into the neighborhood.”

The LA Times follow up on the John Floyd Thomas arrest contains a summary paragraph that pretty much says it all:

DNA leads detectives to John Thomas Jr., 72. He is held in two slayings, but police suspect he may have killed up to 30 elderly Westside and Claremont women a decade apart.

The story also contains some interesting background including a tidbit about Thomas’ job as an insurance adjuster in Glendale:

Thomas had been working as an adjuster handling workers’ compensation claims since 1989 — the year the killings stopped. He resigned after his arrest March 31.

Jennifer Vargen, a spokeswoman for the State Compensation Insurance Fund, would not comment on whether the employer was aware of Thomas’ criminal record, saying it was a personnel matter.

Co-workers at his office in Glendale described Thomas as quiet but friendly. They said his job mostly involved paperwork.

His steady employment masked a troubled past.

Thomas was born in Los Angeles. His mother died when he was 12 and he was raised by his aunt and a godmother. Thomas attended public schools, including Manual Arts Senior High School.

He briefly joined the U.S. Air Force in 1956. At Nellis Air Force Base in Nevada, a superior described Thomas as often late and slovenly. He received a dishonorable discharge, according to his military records, and was arrested for burglary and attempted rape in Los Angeles. He was convicted and sentenced to six years in state prison in 1957. Two parole violations sent him back behind bars until 1966.

Meanwhile Pasadena Police are cracking what cold case files they may have left, according PD spokeswoman Janet Pope Givens:

Since Thomas had a prior arrest in Pasadena, detectives are looking into whether any unsolved cases may fit the same description.

“The cold case unit is taking a look at it in terms of some of the other unsolved homicides that may have taken place prior to and after, to see if there is any relation,” said Police Department Spokesperson Janet Pope Givens.

Specifically, they are looking into cases involving women who were killed around that time period.

Thomas was originally arrested in Pasadena in 1978 on suspicion of rape, but was convicted of lesser charges, she said.

The file on his arrest, which is more than 30 years old, is no longer available, she said.