SOUTH EL MONTE >> The death of a man whose body was found floating in the San Gabriel River in South El Monte over the weekend has been ruled an accidental drowning, coroner’s officials said Friday.
The body of Alex Giovanne Castillo, 23, described as transient, was first spotted by a dog-walker about 1:15 p.m. Sunday, floating face-down in the river near Peck Road and Durfee Avenue, Los Angeles County sheriff’s and coroner’s officials said.
Investigators conducted an autopsy and determined Castillo drowned, and the death was ruled accidental, Los Angeles County Department of Medical Examiner-Coroner records show.
Further information regarding the circumstances of the drowning were not available Friday. But the body was found the same day that a Spring storm dropped scattered rainfall, and even hail, across the Southland.

SOUTH EL MONTE >> Authorities have identified a 23-year-old man whose body was found floating in the San Gabriel River over the weekend.
The body of Alex Giovanne Castillo was discovered about 1:15 p.m. on Sunday, floating face-down in the river near Peck Road and Durfee Avenue, according to Ed Winter, assistant chief of operations at the Los Angeles County Department of Medical Examiner-Coroner. He was believed to be transient.
The man’s cause of death was yet to be determined through an autopsy, Winter said.
A man walking his dog first spotted the body, according to Los Angeles County sheriff’s Sgt. David Kearney.
The body was “moderately” decomposed, indicating a relatively recent death, officials said.
No further details were available.
Anyone with information can reach the sheriff’s Temple Station at 626-285-7171. Tips may also be submitted anonymously to L.A. Regional Crime Stoppers at 800-222-8477.

SOUTH EL MONTE >> The League of Women Voters of the East San Gabriel Valley is planning a candidate’s forum Tuesday with the two candidates vying to replace former South El Monte mayor Luis Aguinaga, who resigned and pleaded guilty in a federal bribery case last year.
The forum will be held at 7 p.m. at the South El Monte Senior Services Center, 1556 Central Ave., organizers said.
The two candidates on the March 7 special election will be Mayor Pro Tem Gloria Olmos and City Councilman Joseph Gonzales.
Former City Councilman Raul Pardo will not appear on the ballot, as the required signatures were not approved by the city, but will be running as a write-in candidate.
They are competing to replace Aguinaga, who resigned in August, a month before he pleaded guilty to accepting at least $45,000 in bribes from a contractor over the course of seven years.
Aguinaga faces up to 10 years in federal prison at his scheduled sentencing on March 2.
For more information on the candidate forum, the League of Women Voters of the San Gabriel Valley can be reached at 626-967-8055.

SOUTH EL MONTE >> A drunken driver who ran over and killed a man who was sleeping in a South El Monte parking lot in September received a 12-year prison sentence this week, authorities said.
Steven Agredano, 47, of South El Monte pleaded “no contest” to gross vehicular manslaughter while intoxicated and drunken driving in connection with the fatal incident, which took place about 5:45 p.m. on Sept. 17 in the 2600 block of Rosemead Boulevard, according to Los Angeles County District Attorney’s Office spokeswoman Sarah Ardalani. An additional charge of driving with blood-alcohol level above .08 percent was dismissed.
Killed was Elias Contreras Garcia, 57, of South El Monte, according to Los Angeles County Department of Medical Examiner-Coroner’s officials. An autopsy determined he died from “craniocerebral trauma” and the death was ruled an accident.
He was asleep in the parking lot, for unknown reasons, when Agredano ran over him with a Toyota 4Runner SUV, sheriff’s officials said at the time.
Following his plea on Tuesday in the Pomona branch of Los Angeles County Superior Court, Agredano received his 12-year prison sentence from Judge Salvatore Sirna, Ardalani said.
It was far from Agredano’s first time in front of a judge.
Agredano was convicted of arson and burglary after setting fire to the vacant home of a neighbor in March of 2012. He was sentenced to four years in state prison, records show. It was unclear when he was released.
He was also convicted of battery on a peace officer in August and domestic battery in January, according to court records.
Agredano was convicted of recklessly evading police in 2011, resisting arrest in 2008, as well as vandalism, reckless driving and battery in 1995.

SOUTH EL MONTE >> Officials on Sunday identified a 34-year-old Covina man who was found dead inside a car parked outside a South El Monte Pharmacy on Saturday morning.
Paramedics pronounced Rathana Prak In dead at the scene shortly after he was discovered unresponsive about 11:30 a.m. on Saturday behind the wheel of a Honda Civic parked outside a CVS Pharmacy at Durfee Avenue and Rush Street, Los Angeles County Department of Medical Examiner-Coroner Investigator Rudy Molano said.
His cause of death was not immediately clear, and an autopsy was planned, officials said.
There were no overt signs of trauma on In’s body, and no initial indication of foul play, Sgt. James Long said.
Anyone with information can reach the sheriff’s Temple Station at 626-285-7171.

SOUTH EL MONTE >> Authorities launched an investigation, but did not initially suspect foul play, after a man was discovered dead behind the wheel of a car parked in a South El Monte parking lot on Saturday.
A passer-by first reported seeing an “unresponsive” man slumped over in a Honda Civic about 11:30 a.m. in the parking lot of CVS Pharmacy, at Durfee Avenue and Rush Street, Los Angeles County sheriff’s Sgt. James Long said
Paramedics pronounced the man dead at the scene, he said. He was estimated to be in his 30s.
His cause of death was not clear, however there were no signs of trauma on the body or indications of foul play, Long said.
Los Angeles County Department of Medical Examiner-Coroner investigators will conduct an autopsy.
Anyone with information can reach the sheriff’s Temple Station at 626-285-7171.

SOUTH EL MONTE >> Homicide detectives are seeking the killer or killers of a man found shot to death inside an SUV in a South El Monte parking lot Saturday night.
Deputies first received a report of a gunshot victim about 9:10 p.m. in a parking lot shared by several businesses in the 2000 block of Durfee Avenue, Los Angeles County sheriff’s officials said in a written statement.
“When they arrived, the deputies located the victim seated in the driver’s seat of an SUV in the parking lot,” according to Deputy Crystal Hernandez of the sheriff’s Information Bureau. “The victim had an undetermined number of gunshot wounds to his upper torso.”
Paramedics pronounced the victim, described only as a man, dead at the scene.
“Detectives are continuing to speak with possible witnesses, however there is no suspect description at this time. The investigation is still active and ongoing,” Hernandez said.
Anyone with information is asked to contact the sheriff’s Homicide Bureau at 323-890-5500. Tips may also be submitted anonymously to L.A. Regional Crime Stoppers at 800-222-8477. 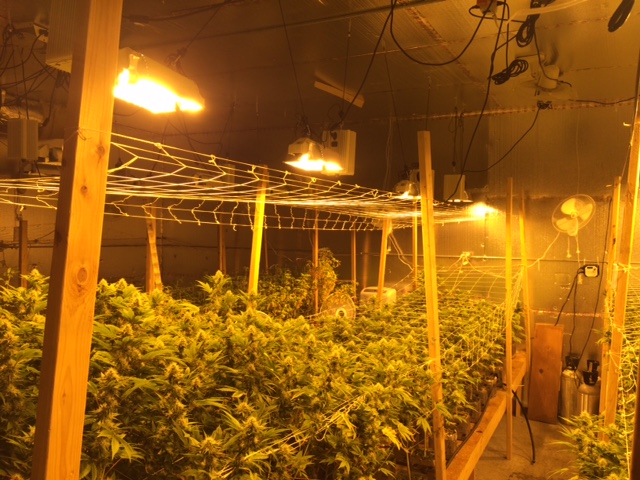 SOUTH EL MONTE >> Sheriff’s investigators seized $1.5 million worth of marijuana and arrested two men during a raid at a South El Monte warehouse on Tuesday, authorities said.
Hokab Avagyan, 42, of South El Monte and Armen Begoyan, 41, of Los Angeles were booked on suspicion of cultivation of marijuana following the 11 a.m. bust in an industrial neighborhood in the 1000 block of Adelia Avenue, according to Los Angeles County sheriff’s officials and booking records. 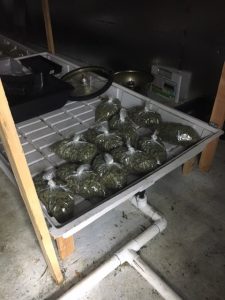 Deputies seized about 2,200 live marijuana plants, 40 pounds of “finished” marijuana and $10,000 in cash, Los Angeles County sheriff’s officials said in a written statement.
“As part of an ongoing investigation into a potential illicit marijuana growing operation, members of the Los Angeles County Sheriff’s Department Narcotics Bureau Northeast team served several search warrants in the 1000 Block of Adelia Avenue,” the statement said. “At the conclusion of the operation, a large complex illicit marijuana grow was discovered inside of a warehouse/business.”
Both Avagyan and Begoyan were released from custody Tuesday night pending their initial court appearances after posting $50,000 bail each, records show.
No further details were released Wednesday as detectives continued their investigation. 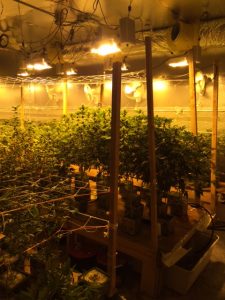 SOUTH EL MONTE >> South El Monte Mayor Luis Aguinaga agreed to plead guilty to a federal bribery charge Thursday after being charged with regularly collecting cash payments from a city contractor over the course of seven years, officials said.
In his plea agreement, the mayor admitted to taking bribes every two to three weeks from a contractor who conducted business with the city, U.S. Attorney’s Office spokesman Thom Mrozek said in a written statement.
“The payments were rewards in connection with the approval of city contracts for the contractor,” Mrozek said.
The bribes, which were initially $500 at a time but later increased to $1,000, were paid between 2005 and September of 2012, prosecutors allege. Under the plea agreement, Aguinaga admitted taking at least $45,000 in bribes.
“This long-running corruption scheme compromised the effective governance of South El Monte,” U.S. Attorney Eileen M. Decker said. “Corruption like Mr. Aguinaga’s is a threat to government institutions and undermines the public’s trust in all government officials. The residents of South El Monte deserve better.”
The contractor, identified in court documents as a “confidential witness,” left the bribe money for Aguinaga by placing cash in envelopes dropped in a bathroom at South El monte City Hall, or left inside the passenger-side pocket of a car, Mrozek said.
One meeting between Aguinaga and the confidential informant was monitored by undercover FBI agents, he said.
“Defendant was nervous about meeting with CW because Cudahy city officials, including the mayor, had recently been arrested and charged with accepting bribes,” according to the plea agreement. “While defendant was speaking with CW, defendant showed CW his cell phone on which he had written ‘don’t talk’ or ‘don’t saying anything,’ and defendant asked CW several times to accompany him to the bathroom. Once they went to the bathroom, CW left an envelope with $2,000 cash on the counter near the sink. Defendant took the envelope containing the money and kept at least $1,000 for himself.”
In some cases, such as the FBI-monitored meeting, Aguinaga took some of the money to give to another “City public official” who was not identified in court documents.
“Mr. Aguinaga abdicated his civic duty when he made decisions for the city based on bribes he demanded, instead of for the good of the people he was elected to serve. The FBI will not tolerate corruption by city officials, nor should the residents of South El Monte,” according to Deirdre Fike, assistant director in charge of the FBI’s Los Angeles Field Office.
He is scheduled to appear in federal court in Los Angeles Aug. 10 for an arraignment hearing, officials said.
A conviction for bribery carries a maximum sentence of 10 years in federal prison.