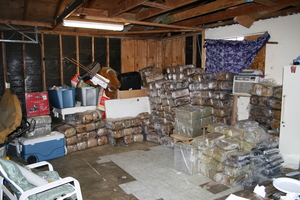 West Covina police officers joined a multi-agency task force Friday to seize $1.75 million worth of marijuana and arrest two men, police said.
Enrique Lopez, 28, of Paramount and Paulino Rivera, 18, of Lynwood were arrested on suspicion of possession of marijuana for sales and transporting marijuana, West Covina police said in a written statement. Rivera was also suspected of possessing a concealed handgun.
West Covina police joined the effort, which took place in Lynwood and Paramount, to provide extra manpower at the request of a multi-agency task force, West Covina police Lt. Dave Rozeboom said.
Six West Covina officers, working with the Los Angeles County Sheriff’s Department and other agencies that make up the L.A. IMPACT task force, found 3,700 pounds of pot in a car in Lynwood and a Paramount home, West Covina police Lt. David Rozeboom said.
“It is one of the larger amounts that we’ve seized,” he said.
The incident began about 8 p.m. as officials were watching a house at 10845 McNerney Avenue in Lynwood where drug activity was suspected, West Covina police said in a written statement.
Sheriff’s deputies spotted Lopez leaving the home and pulled him over for a traffic violation, police said, when they discovered he did not have a valid driver’s license and impounded the car.
“During an inventory search,” the statement said, “600 pounds of marijuana was located.”
“They gained information that led them to the (house),” Rozeboom added.
Police served a search warrant on a house at 6843 San Miguel Ave. in Paramount, police said, where another 3,100 pounds of marijuana was found.
Officials arrested Rivera near the home, who was allegedly was carrying a concealed handgun, Rozeboom said. Two vehicles were seized from the home.
According to sheriff’s booking records, Lopez and Rivera were each being held in lieu of $100,000 bail at the West Covina Police Department’s jail. They were due for arraignment Tuesday in West Covina Superior Court.
Friday was not the first time West Covina police have partnered with other agencies to seize large amounts of marijuana.
In June, West Covina police officers were asked to work with U.S. Immigration and Customs officials to seize 3,500 pounds of marijuana that was concealed in a truck in Montebello.
The shipment, which originated in Mexico, was placed into makeshift boxes that were designed to look like stacks of lumber.

Verne Gagne, the man who brought the nation Hulk Hogan and Jesse “The Body” Ventura, is suspected of fatally injuring his roomate at a board and care facility for Alzheimer’s patients in Minnesota.

Minnesota wrestling legend Verne Gagne is under investigation in the death of a fellow resident at a Bloomington care facility, a local television station is reporting.

Police said Gagne, 82, threw his roommate, Helmut R. Gutmann, 97, to the floor on Jan. 26, breaking his leg and injuring his head, according to KMSP-TV. Gutmann was treated for his injuries, but was later rehospitalized, the station said. He died Saturday.

The men lived at Friendship Village, a care facility for people with Alzheimer’s disease and dementia. Both had Alzheimer’s-related dementia, KMSP-TV said.

Speaking of professional wrestling, Ray Renati, a Northern California blogger suggests that Mickey Rourke should get the best actor nod for his role in the Wrestler. Here’s a portion of his take:

Once every ten years or so a movie comes along that seems to transcend the art form. From the first moments we realize that we are not just watching a film but that we have been given the rare gift of peering into a person’s soul. In “The Wrestler” you quickly realize that for the next two hours you’re going to be given a raw, unprotected, and brutally honest performance from a man who has suffered and has chosen, as a true artist, to reveal that suffering to the world. I can think of few other examples of this in film. Al Pacino in the first two “Godfather” movies comes to mind. Judy Garland in “The Wizard of Oz” perhaps is another example, all be it a strange and surprising one.

Both the LAT and the Riverside Press-Enterprise delve into the rash of violence at the Soboba Indian reservation outside San Jacinto. PE includes a timeline of incidents that stretches back to 2007. I’ve heard that the tensions are long simmering and likely go back many more years if not decades.

Speaking of OIS, I stumbled on a law enforcement Web site (Officer.com) that carries discussions of several of the more recent shootings, including Tuesday’s Covina shooting.

Speaking of law enforcement — how about the confluence of TV and Sheriff’s department causing a reexamination (and temporary closure) of the Sheriff’s Academy in Whittier. Here’s what the DN says.

Nice back and forth between Proctor and Ortega for the coveted WWE Pasadena belt. There’s an interesting revelation or two in there…Just in time for Judgement Day this weekend.

Speaking of Judgement Day there’s lots of news coming out of China in the wake of the devastating 7.9 earthquake, there’s also plenty of local connections.

Oh almost forgot, it’s Bike Week in Pasadena, but that’ doesn’t make things any safer as Hector Gonzalez, city editor of the Star-News just pointed out in an e-mail:

so much for bike-to-work week:HACIENDA HEIGHTS<NO1>ZZSG<NO> <NO1>(CNS)<NO>- A bicyclist in his 60s was killed today when his bike and a car collided in the Hacienda Heights<NO1>ZZSG<NO> area.<QA>

The accident occurred about 7 a.m. on Los Altos Drive at Hacienda Boulevard, the California Highway Patrol reported. The man, who was not immediately identified, died at a hospital.<QA>

This guy is not called “Super Mojado.” *He’s “Viper,” Super Mojado’s arch enemy.* I heard about the duo on the Bill Handel show, and found this Fox News story on them . Here’s an excerpt:

Super Mojado Super Wetback, if you translate the Spanish slur is a new Mexican wrestler making his debut Saturday in Van Nuys, Calif., to help raise money for some of the more than 100 undocumented workers busted by U.S. Immigration and Customs Enforcement last month.

“We decided to make a hero that would be for all the people that don’t have papers,” said Joseph Medina, a wrestling promoter and the character’s creator. He said Super Mojado’s role is to educate the public.

No word on whether these guys are suspects in the Lucha Libre/ WWF Shotgun Bandit spree. We’ll keep an eye on it, but don’t bet on it.

In the meantime, don’t forget Wrestlemania is just a few days away.

*As for Super Mojado, here he is!

The tag team duo hitting area banks wearing luchador masks reminescent of Rey Mysterio have now been named by the FBI (they liked our suggestion, but chose to stick with something a little more English sounding).

Ladies and Gentlemen, meet the WWF Shotgun Bandits, whom the FBI describes as Black Males, Mid 20s to Late 30s, Robbed in City of Industry and Rowland Heights:

We’re not sure why the FBI chose WWF as opposed to WWE, WCW or ECW, but they did.

BTW we’re only 23 days away from Wrestlemania. This year it’s in Vega$. I’ve got the Undertaker beating Edge.

I also like Floyd Mayweather over the Big Show…