WEST COVINA >> In a strange seemingly illogical series chain of events, a man and woman called police on themselves to falsely report a carjacking Friday before leading West Covina police on a chase that ended with a crash in Bassett that injured two bystanders, including a little girl, authorities said.
Britanny Benquenchea, 26, and Joshua Rodriguez, 27, both of Victorville, were accused of crimes including evading police and assault with a deadly weapon in connection with the bizarre episode, which began just after 7 p.m. at the Plaza West Covina shopping mall, West Covina police Lt. Travis Tibbetts said. Both are on parole for robbery, and Benquenchea wears a GPS tracking device.
Police first responded to the mall, 112 Plaza Drive, after a woman called 911 to report she had been carjacked of her 2015 Toyota Corolla at gunpoint by a man and woman, the lieutenant said.
Responding officers spotted a car matching the description of the stolen Toyota, containing a man and woman matching the description of the carjackers, driving just south of the mall.
Benquenchea, who was driving, refused to pull over for police, initiating a high-speed chase.
The pursuit ended minutes later when the fleeing car struck a civilian vehicle at Amar Road and Willow Avenue, Tibbetts said.
Both suspects were detained at the scene, he said. Police used a K-9 to help apprehend the male suspect, who refused to comply with officers’ commands.
An 8-year-old girl who was riding in the car struck by the fleeing suspects was initially hospitalized in critical condition, but was expected to survive, Tibbetts said. A woman in the vehicle, described only as an adult, was also hospitalized. Neither victims injuries were believed to be life threatening.
The investigation then took an unexpected turn.
Officers determined Benquenchea herself had called the police to falsely report being carjacked, Tibbetts said.
After being involved in a fight and getting escorted from the mall by security guards, Benquenchea and Rodriguez became involved in a confrontation with security before speeding away from the mall, police said.
The suspects may have struck a parked car as they left, he said. The details of the incident at the mall remained unclear late Friday.
“Apparently, they decided to call and report a carjacking, describing themselves as the suspects,” Tibbetts said.
The call appeared to be some sort of ill-thought-out ruse to divert police attention from the mall incident, he said. Although Benquenchea gave descriptions matching herself and Rodriguez as that of the phony carjackers, she reported the purported carjackers had fled in the opposite direction.
Benquenchea gave her real first name while reporting the carjacking, Tibbetts added. And when police called back the number, Benquenchea’s phone rang through the Toyota’s wireless audio system.
“I’ve never seen that before,” Tibbetts said.
Witness Christopher Morales posted footage of the male suspect being taken into custody with the help of a police K-9 on the social media network.
Another witness, April Aguirre, posted video of the aftermath of the collision in which firefighters can be seen treating an injured patient on Twitter.
The female suspect appeared to be wearing a GPS ankle bracelet, she said. “When they brought her out she seemed like she was on drugs,” the witness added.
In an email, Aguirre said she did not see the crash itself, as she arrived afterward.
“When I got there they had a male on a gurney taking him away. Then a couple minutes later they had a female in the video in handcuffs & she could barely walk or she was resisting it seemed like,” she said.
The woman yelled out, “Please don’t leave me,” and other phrases as firefighters treated her injuries, Aguirre said.
Both suspects were hospitalized prior to booking, Tibbetts said. 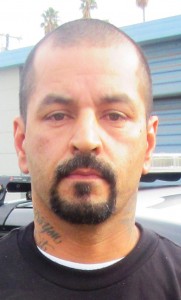 EL MONTE >> A man and woman carjacked a man and robbed him and his friend at gunpoint outside an El Monte pizza parlor early Sunday before police tracked a stolen cell phone to find and arrest them, officials said.
Samuel Barajas, 24, of El Monte is accused of carjacking, robbery, assault with a deadly weapon and resisting police following the crime, which unfolded about 12:20 a.m. outside a Pizza Hut, 11910 Garvey Ave., El Monte police Lt. Chris Cano said. Ana Hidalgo, 18, of El Monte, is accused of carjacking and resisting police.
A 19-year-old Whittier man was talking with a friend, a 21-year-old El Monte man, when the suspects approached, Cano said.
Barajas brandished a handgun while demanding the Whittier man’s Infiniti G35, as well as both men’s cell phones, the lieutenant said. The victim’s complied, and the suspects fled in the stolen Infiniti.
The car was soon found abandoned along Whittier Boulevard in Pico Rivera, Cano said.
But police managed to track one of the stolen cell phones, which led them to a moving taxi cab, he said. Officers pulled over the taxi in the area of Peck Road and Durfee Avenue in South El Monte, Cano said.
Police arrested Hidalgo without a struggle, Cano said.
Barajas refused police commands, prompting them to shoot him with a less-lethal foam projectile fired from a 40mm grenade launcher, he said. Barajas ran, but was ultimately subdued nearby with help from a police K-9.
Police recovered a loaded handgun from the taxi in which the suspects were riding, Cano added.
Barajas was taken to a hospital for treatment of injuries including dog bites to his arm prior to booking, police said.
He was released from jail in August after serving less than one year of a two year sentence following a conviction for assault likely to produce great bodily injury, Los Angeles County Superior Court and booking records show. He was acquitted of an attempted murder charge in the same case.
Hidalgo was being held in lieu of $180,000 bail pending her initial court appearance, records show.

PASADENA >> Police are seeking a man who used a ruse to carjack an 84-year-old Pasadena woman of her Lexus Friday, officials said.
The crime took place about 11:45 a.m. in the 100 block of West California Boulevard, Pasadena police Lt. John Mercado said.
The victim had just gotten into her car and turned on the engine when a man approached her at her still-open driver-side door, he said.
Mercado said the man told the elderly woman that her car was sparking from beneath and directed her out of the vehicle.
“When she exited her car, he got in and drove away, west on California,” the lieutenant said. The woman suffered no injuries.
Stolen was the woman’s silver, 2004 Lexus 330 with a California license plate of 5FAB540, he said. The carjacker was described as a white man in his 50s, about 5 feet 7 inches tall, of medium build, with short brown hair. He wore a khaki-colored jacket.