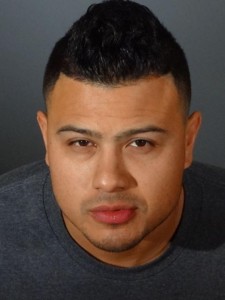 WHITTIER >> Police Friday jailed a registered sex offender they say raped two teenage girls he met in the parking lot of a Whittier high school during two separate incidents that Wednesday and Thursday.
Richie Esquivel Corvera, 28, of South Whittier was booked on suspicion of two counts of rape by force or fear, as well as violating his probation, according to Whittier police officials and Los Angeles County booking records.
Investigators arrested Corvera Friday night, hours after the two victims, ages 14 and 15, reported the crimes to school officials, who then notified Whittier police, Whittier police Officer John Scoggins said in a written statement.
Corvera met both victims in the parking lot of Sierra Vista High School, 9401 Painter Ave., police said.
The first attack took place about 9 a.m. Wednesday after Corvera approached a 15-year-old girl in the parking lot of the school, Scoggins said.
“Corvera persuaded the victim to get into his car and eventually drove her to a local motel where a sexual assault took place,” he said.
A nearly identical incident took place the following day, when Corvera persuaded a 14-year-old girl to get into his car before driving her to a motel and sexually assaulting her, officials said.
After learning of the alleged crimes Friday, “Detectives carried out an extensive investigation throughout the day, which resulted in the identification of Corvera as the suspect in this crime,” Scoggins said.
Police found him about 9 p.m. driving along Scott Avenue, north of Lambert Road, and arrested him during a traffic stop.
Following his arrest, detectives served a search warrant at Corvera’s home in the 10300 block of Parise Drive, Scoggins said. The home sits only a few hundred feet from the campus of California High School at 9800 Mills Ave.
Police were looking into whether Corvera was permitted to live so close to a school under the terms of his probation and sex registrant status, Scoggins said.
Corvera is already a registered sex offender due to a previous conviction for annoying or molesting a child, according to the state’s Megan’s Law database.
He was being held without bail pending a scheduled arraignment Tuesday in Bellflower Superior Court.
Corvera drives a white, newer-model, four-door sedan, Scoggins said. But he added that investigators had ruled out the possibility he had access to other vehicles as well.
“Detectives are concerned that additional victims may be out there,” Scoggins said.
Anyone with information is asked to contact Whittier police at 562-567-9200. Tips may also be submitted anonymously to L.A. Regional Crime Stoppers at 800-222-8477.

An Antioch resident whose backyard shares a fence with the Garrido property once spoke to a little girl through that fence, he said Friday.

She told him her name was Jaycee.
Patrick McQuaid, 27, was a child when he saw a blonde girl through the chicken wire fence that used to separate his Bown Lane backyard from the Garridos’ yard. He said he believes it was around the summer of 1991, not long after Jaycee Lee Dugard was kidnapped from a South Lake Tahoe bus stop.
“I thought she was pretty,” McQuaid said.
After he learned Jaycee’s name, McQuaid, who had never seen any children through the fence before, asked whether she lived there or was just visiting. He said she told him she was living there, but before he could ask more questions Phillip Garrido came out and took her into the house.
“I didn’t think anything of it. I was young,” McQuaid said.
Soon after, Garrido built the eight-foot privacy fence that now separates the two yards. McQuaid said he never saw the girl again. The next time he saw children near the Garrido house was this summer, when he saw two young girls riding in Garrido’s car.
Though the two children Dugard bore with Garrido are 15 and 11, McQuaid said the children he saw in Garrido’s car looked younger — closer to 8 and 10 years old.

The Los Angeles Times reports that the U.S. Attorney’s Office in Los Angeles has opened up a probe of Cardinal Roger Mahoney for his role in the sex abuse scandal that rocked the Archdiocese in recent years. Here’s a portion of the story that appears on the Time’s Web site this afternoon:

The U.S. attorney in Los Angeles has launched a federal grand jury investigation into Cardinal Roger M. Mahony in connection with his response to the alleged molestation of children by priests in the Los Angeles Archdiocese, according to two law enforcement sources familiar with the case.

The probe, in which U.S. Atty. Thomas P. O’Brien is personally involved, is aimed at determining whether Mahony, and possibly other church leaders, committed “honest services fraud” by failing to adequately deal with priests accused of sexually abusing children, said the sources, who requested anonymity because they are not authorized to speak publicly about the investigation.

I’ve had several emails this weekend asking about the fate of Christine Collins’ the real life woman played by Angelina Jolie in Clint Eastwood’s “The Changeling.”

Perhaps the best answer is on Roxanne Adam’s blog, “Dispatch from the Third World of Los Angeles.” Adams came across some records that indicate a Christine M. Collins died in 1996 in a tiny East Bay community. Here’s a portion of the entry:

One Christine M. Collins, born on April 24th 1900, died in 1996 in Lafeyette, a city located in Contra Costa County, California; this is the only official public record I could find. Since her son was nine years old when he disappeared in 1928, it’s entirely reasonable that she was born in 1901.

And the photo caption:

Walter Collins’ mother, Mrs. Christine Collins, who confronted Gordon Northcott in jail concerning her son. “I did not kill Walter,” he told her. “I believe you,” she replied. Later, when Arthur Hutchens claimed to be her son and she did not accept him, she was sent to a psychopathic ward. She later filed suit against the police for this action.

This from staff and wire reports:

LOS ANGELES  — An Altadena man made his first court appearance today on
charges that he molested two 9-year-old girls, including one of his students,
while he was working as a teacher about 20 years ago.

Mark Walter Sonnenburg, 53, is scheduled to be arraigned Oct. 20 on three
felony counts filed last Friday involving the two alleged victims, according to
Sandi Gibbons of the District Attorney’s Office.

One of the girls was a student at Eagle Rock Montessori School,
where he taught at the time, Gibbons said.

He had more recently taught at The Walden School in Pasadena where he worked until March, according to a statement released by that
school.

“We have determined that these allegations do not involve any former or current
student from our school and are based on a time more than two decades ago,”
Walden School’s statement says. “Prior to learning of the allegations, the
school never received any information, complaint or allegation of this kind
involving Mr. Sonnenburg — before or during his tenure at the school.”

The Walden School said it had been contacted by authorities during the last
school year, had been fully cooperating with the investigation and conducted
its own independent investigation.

Sonnenburg was arrested last Friday by officers from the Los Angeles Police
Department’s Northeast Division. He has remained jailed since then in lieu of
$300,000 bail.