SOUTH PASADENA >> An 86-year-old woman died after being struck, dragged and pinned by a car driven by a 93-year-old woman in a church parking lot Saturday afternoon as both women were leaving Mass, authorities said.
Killed was Elizabeth Cherry of South Pasadena, South Pasadena police Officer Jeff Holland said.
The “tragic accident” took place about 6:10 p.m. at Holy Family Catholic Church, 1527 Fremont Ave, South Pasadena police Sgt. Jim Valencia said.
Cherry was preparing to get into her car in the parking lot when the other woman, a Pasadena resident, struck her while backing up her Jaguar XJ6, he said.
Witnesses reported hearing the Jaguar’s engine revving steadily, as if the accelerator was being depressed, before the car shifted into reverse and lurched backward and toward the right, Holland said. The Jaguar sideswiped Cherry’s Toyota Avalon and struck her.
“The 86-year-old woman was dragged underneath the vehicle for over 100 feet until the vehicle came to rest after colliding with a block wall,” South Pasadena police officials said in a written statement.
Police said the elderly victim remained pinned beneath the Jaguar when first responders arrived at the scene.
Firefighters freed the badly injured woman from beneath the car and took her to Huntington Hospital in Pasadena for treatment, officials said.
The woman succumbed to her injuries at 8:20 p.m., Valencia said.
The driver remained at the scene and cooperated with investigators, Holland said. She did not appear aware she had struck a person until afterward.
Officers from the South Pasadena Police Department’s Traffic Unit are continuing their investigation, though officials noted no overt signs pointing to a crime. 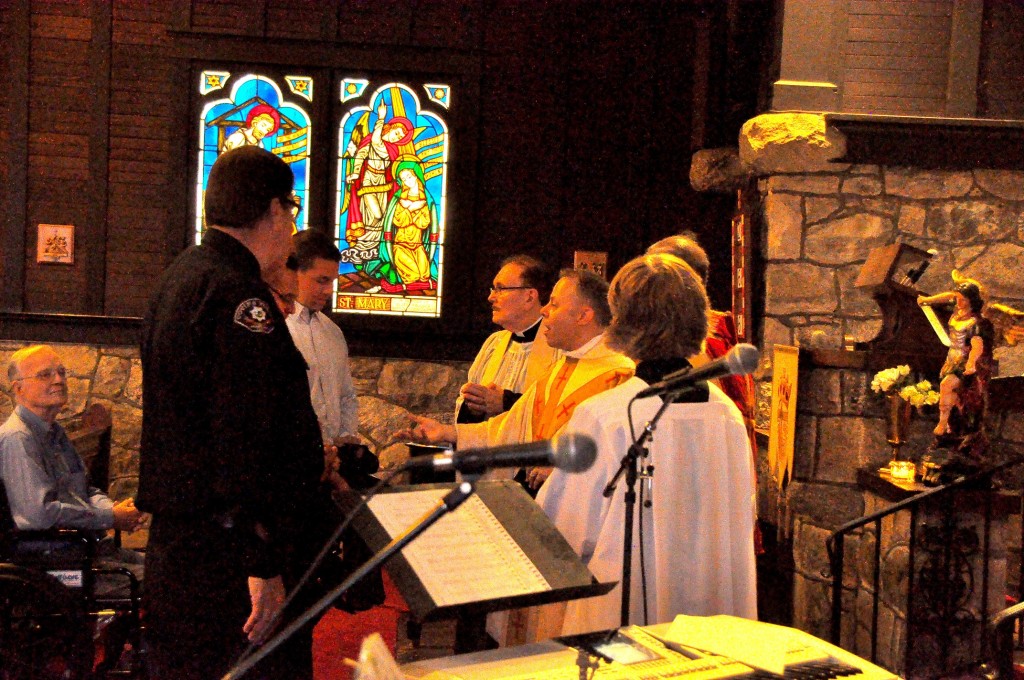 COVINA >> A Covina congregation offered special prayers and blessings Sunday for police, firefighters and others in harms way during a small but heartfelt special mass to honor first responders.
It was the third annual first responders ceremony hosted at the Holy Trinity Episcopal Church at 3rd Avenue and Badillo Street, with a strong showing from Covina police, including the family of fallen Covina police Sgt. Scott Hanson. Parishioners also reflected on the sacrifice of Covina police Officer Jordan Corder, killed in an on-duty motorcycle crash less than a year ago on Sept. 30.
Led by the Rev. Steve De Muth and the Rev. William Peyton, the parish asked God’s protection and guidance for those who stand in watch over society.
“It is our sincere hope that by recognizing the work you do, and by offering our prayers and out fellowship, we will strengthen the bonds of community,” De Muth said. “For this is the job of religion, to support one another in our particular vocations 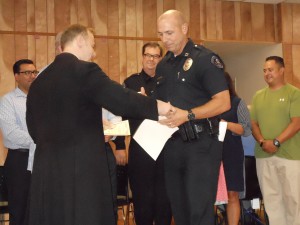 to love god and to love our neighbors.”
De Muth cited the book of Isaiah, which calls upon the faithful to “Go set a watchman” to serve as a moral conscience of a society. The verse inspired the title of the recently published sequel to Harper Lee’s, “To Kill a Mockingbird.”
He likened the role of first responders to the biblical watchmen.
“Did you know that when an officer dies, they say his watch has ended?” De Muth said.
De Muth also called on the congregation to pray for firefighters and all other first responders who regularly risk their own safety to protect others.
“Be with them today and protect them always as they continue their diligence on the streets of our nation,” Peyton prayed. “For those who have given their lives, we ask that their families are healed and protected from more harm, and that your healing balm may bring them peace.”
Police officers lined up to receive a blessing from the priests. Several offered up their duty belts to be blessed as well.
Officer Hanson’s widow, Allison Hanson, attended the ceremony with her children Sarah and Andrew. 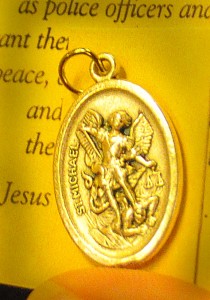 Andrew has followed in his father’s footsteps. Having recently graduated a law enforcement academy, the young police officer is now undergoing training with the Glendale Police Department.
Allison said she and her family are grateful for the ongoing show of support from the community.
“To have the department here, and the city, and our family, it’s pretty amazing,” she said.
Sunday’s ceremony coincided with the church’s Feast of St. Michael of All Angeles, De Muth explained.
Following Mass, the church presented attending officers with certificated of appreciation and medallions depicting St. Michael, known as the patron saint of first responders.
“What a blessing it is when our church communities come together to raise up our officers — those who, as Father Steve said, stand watch on our behalf. And we’re so thankful,” Covina Mayor John King said.
“We have officers who care, who stand up on our behalf, and who we should say thank you to every single day,” he said. “God bless each and every one of them.”