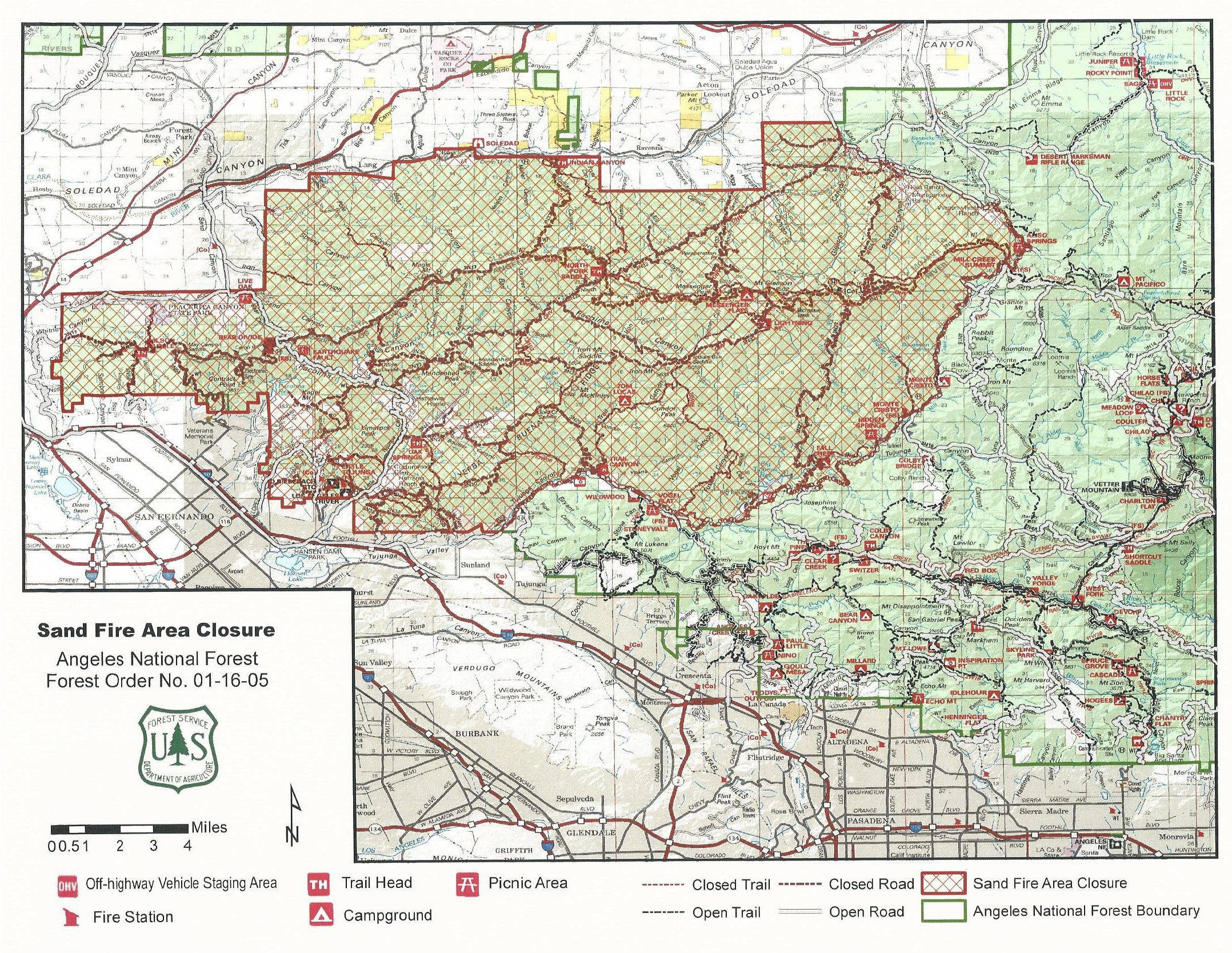 ANGELES NATIONAL FOREST >> The Angeles National Forest Supervisor issued an order Wednesday shutting down public access to the burn area of the Sand fire, which has scorched 60 square miles of the western edge of the Angeles National Forest near Santa Clarita since igniting Friday afternoon.
The closure of access to the Sand fire burn area, including all roads and trails, was necessary to protect both public safety and public resources, according to U.S. Forest Supervisor Jeff Vail. The fire was 40 percent contained Wednesday after scorching more than 38,000 acres of brush, destroying at least 18 homes and leaving one made dead.
“The Sand fire has been a fast-growing fire and weather conditions are such that the fire has potential to continue to grow,” Vail said in a written statement. “In addition, there is limited road access to the area, creating a potential for visitors to become trapped.”
National Forest System road and trails within the burn area will also be closed.
The temporary emergency closure order, titled Order No. 01-16-05, is to take effect immediately and is scheduled to last until the Sand fire is declared extinguished.
Violations of the order can be punished by fines of up to $5,000 for an individual, and $10,000 for an organization, along with imprisonment for up to six months.
Exempt from the order are people with a U.S. Forest Service permit specifically authorizing otherwise prohibited lands, roads or trails; owners or lessees of land in the burn area, “to the to the extent necessary to access their land;” residents in the Sand fire burn area, “to the extent necessary to access their residences;” federal, state or local officers and members of organized rescue or firefighting groups in the performance of their duties, according to the order.
The order is in addition to existing prohibitions within the Angeles National Forest.
In discussing the closure with partnering law enforcement agencies, firefighters and others taking part in the effort, “No opposition or issues were identified,” Vail said.
More than 2,900 firefighters continued battling the Sand fire Wednesday.
“The priority for today’s crews is the uncontained east side of the fire,” U.S. Forest Service officials said in a written statement.
“Hotshot crews and firefighters using mechanized equipment, such as dozers, will construct indirect line and direct line where it is safe to do so in the steep terrain of the Pacoima Canyon east of the Magic Mountain Wilderness.”
“Firefighters are providing structure defense to the historic North Fork Saddle Station and to residences in affected communities,” the statement continued.
As containment lines continued to grow and strengthen, firefighters were gradually being released from the incident, either to return to their home bases or to help with other wildfires, officials said.
Firefighters faced another day of triple-digit temperatures and low relative humidity levels, though predicted fire activity Wednesday was “light to moderate,” according to the USFS.
Residents were reminded not to be alarmed if they see plumes of smoke emanating from the burn area.
“The presence of a smoke column does not necessarily mean the fire is growing,” the USFS statement said. “Interior islands of green vegetation within the fire’s perimeter might burn, creating smoke that could be visible from surrounding communities.” 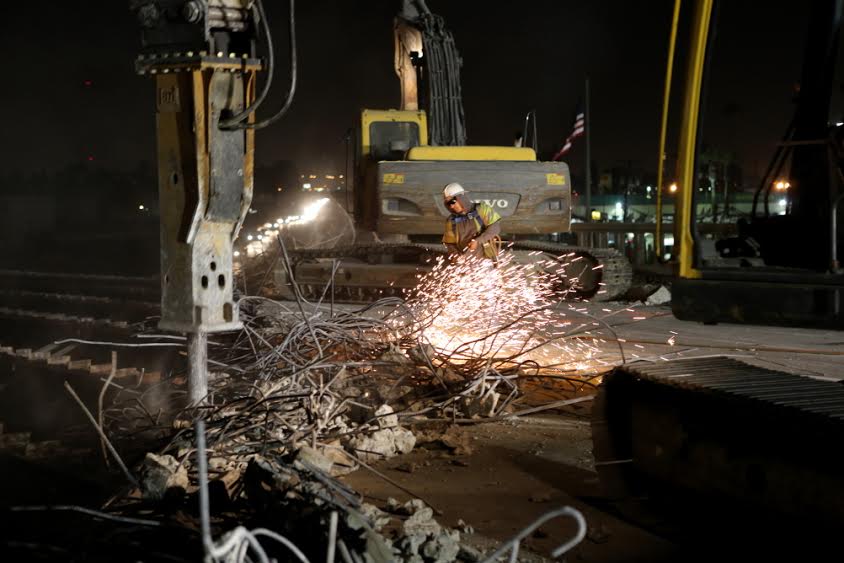 SANTA FE SPRINGS >> Caltrans is kicking off three weeks of overnight closures of both directions of the 5 Freeway in Santa Fe Springs and Norwalk Friday as crews demolish the old Carmenita Road Bridge as part of an ongoing construction project, officials said. 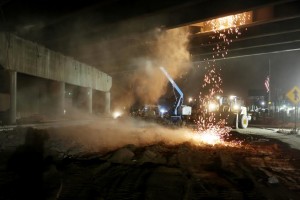 The entire 5 Freeway between Valley View Avenue in Santa Fe Springs and Rosecrans Avenue in Norwalk will be closed from midnight to 5 a.m. Mondays through Thursdays, as well as from 11 p.m. Fridays to 7 a.m. Saturdays, Caltrans officials said in a written statement.
The closure will allow workers to demolish the old two-lane Carmenita Road bridge spanning the freeway, officials said.
The new 10-lane bridge was opened to traffic on July 3, although until new ramps are constructed, only four lanes are accessible in each direction. 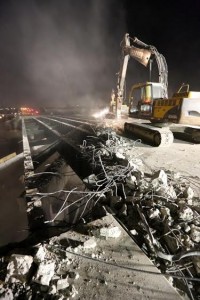 The westbound 91 Freeway connector to the northbound 5 Freeway will also be shut down nighty between 11 p.m. and 5 a.m., as well as the southbound 605 Freeway connector to the southbound 5 Freeway.
The construction project will widen the 5 Freeway between Alondra Avenue and Shoemaker Avenue with an additional carpool lane and an additional general use lane in each direction. The shoulders are also being widened, and a center median built.
For more information, visit www.my5la.com/carmenita-road-interchange. 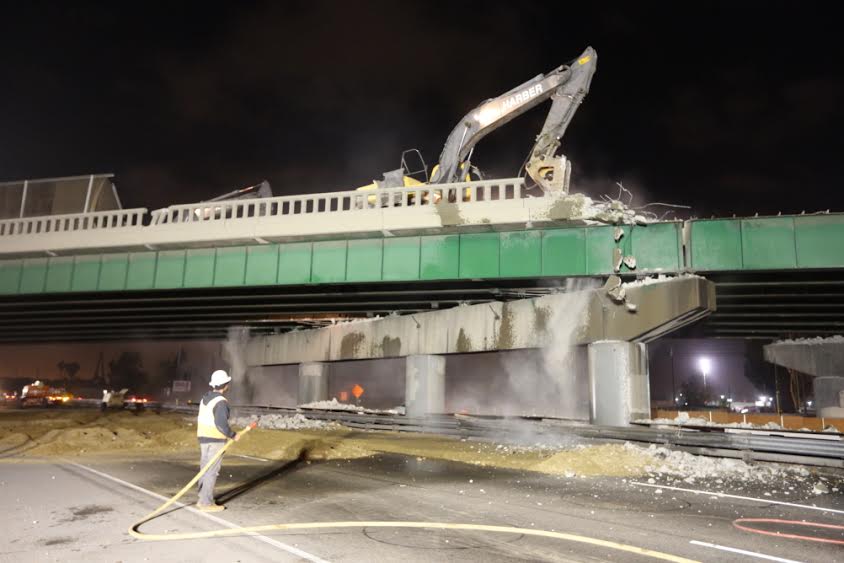