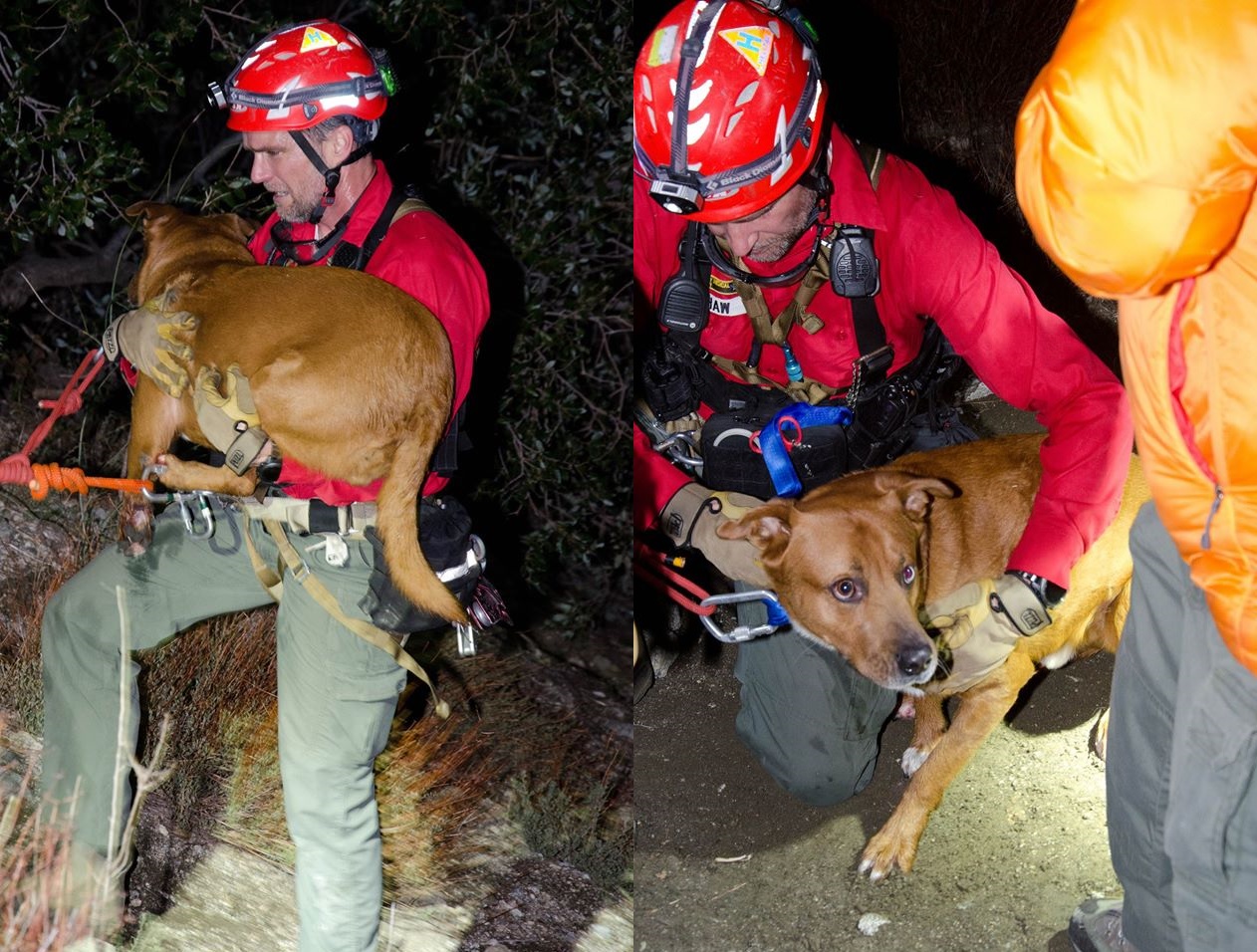 ANGELES NATIONAL FOREST >> A mountain rescue team rescued a woman and her aviophobic dog after they became trapped at the base of 800-foot-deep ravine in the Angeles National Forest north of Altadena on Friday, authorities said.
Members of the Los Angeles County Sheriff’s Department’s Altadena Mountain Rescue Team responded to reports of a distressed hiker about 3:30 p.m., sheriff’s officials said in a written statement.
“Sheriff’s Air Rescue 5 located a female adult hiker just south of Mueller Tunnel, off Mt. Lowe Fire Road, approximately 800 feet over the side of the cliff,” according to the statement.
Rescuers hoisted the woman into the helicopter and took her to a hospital for treatment of hypothermia.
The woman had been hiking with her 40-pound pit bull mix, named Zeus. But the flight crew was not able to capture the dog and were forced to leave it behind as they tended to its owner.
Montrose Search & Rescue Team members joined in the endeavor, and two rescuers were lowered to the dog be helicopter.
“A second attempt was made to secure the dog in a harness to be flown out, however the dog was not cooperative and Air 5 left the area,” according to the statement.
The stubborn pet, “didn’t feel like a helicopter ride,” Deputy Dan Paige said via Twitter.
So officials used hundreds of feet of rope to hoist Zeus, and the rescuers, up to the roadway.
The dog, which appeared uninjured, was taken to an animal shelter in Baldwin Park.
A civilian volunteer working on the rescue was injured when a large rock fell about 40 feet, striking him in the head, shoulder, arm and hand, sheriff’s officials said.
“The rock had knocked his headlamp off his helmet and rendered his right hand completely numb,” according to the statement. “The injured rescue team member bandaged his hand and hiked out on his own.”
It was determined at the hospital that the rescuer suffered a fracture and an inch-long laceration to his finger. 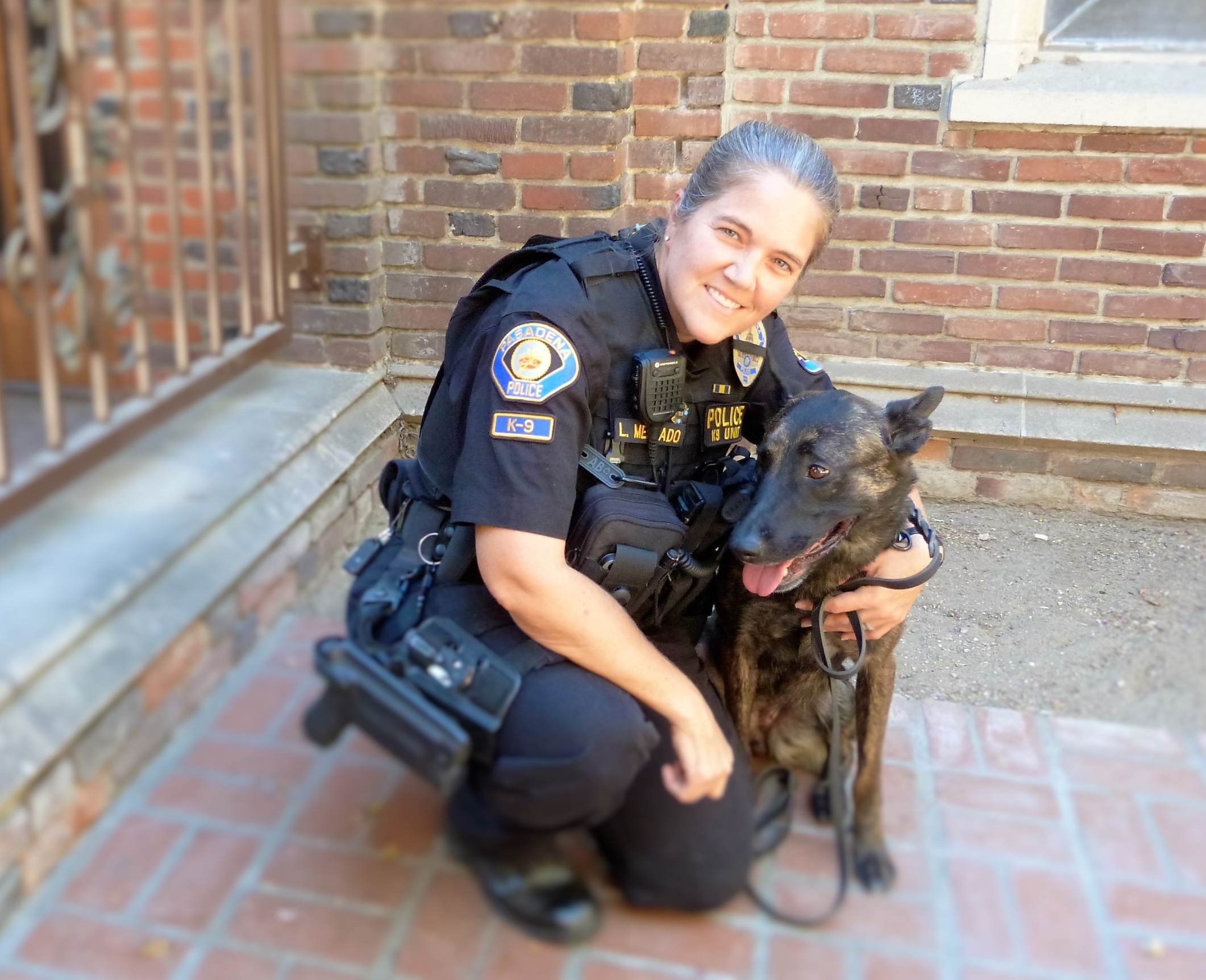 PASADENA >> The Pasadena Police Department’s first female police dog has taken to the streets with the city’s first female K-9 handler.
Kyra, a 3-year-old Dutch Shepherd from the Netherlands, is partnered with Officer Lynda Mercado.
“(Kyra) is skilled in both suspect apprehension and finding explosive devices,” Pasadena Police Foundation officials said in a written statement.
The team began serving Pasadena earlier this year, officials said.
“At a slim 55 pounds, Kyra has been trained to negotiate a variety of obstacles that are presented to officers that work in the field,” according to the statement. “Currently, she is being trained to detect explosives in open areas as well as confined spaces. This is particularly important since Pasadena is home to a large stadium like the Rose Bowl and hosts the world famous Rose Parade on New Year’s Day. These venues host large audiences and therefore Kyra is taught to alert police quickly to save lives.”
Pasadena police now have four four-legged officers on duty. In addition to Kyra, they include a German shepherd, a Belgian Tervuren and a Belgian Malinois.
Each dog has unique traits and duties.
German shepherds, for example, tend to conduct searches slowly and methodically, Mercado explained. Belgian Malinois tend to be more aggressive in their search tactics, immediately running deep into the search area.
“Kyra is like both of these breeds combined into one and is very adaptable under these extreme situations,” Mercado said.
The police dogs and their handlers train weekly, officials said.
“As part of the training, we practice a variety of scenarios in a variety of terrain so the dogs get used to the differences,” Mercado said.
The purchase of Kyra, along with the specialized SUV to transport her, was funded by the Pasadena Police Foundation.
When not on duty, Kyra lived with her human counterpart.
“I enjoy working with this very smart, reliable dog,” Mercado said. “I bring her home with me at night and she is more than ready to go to work the next day.” 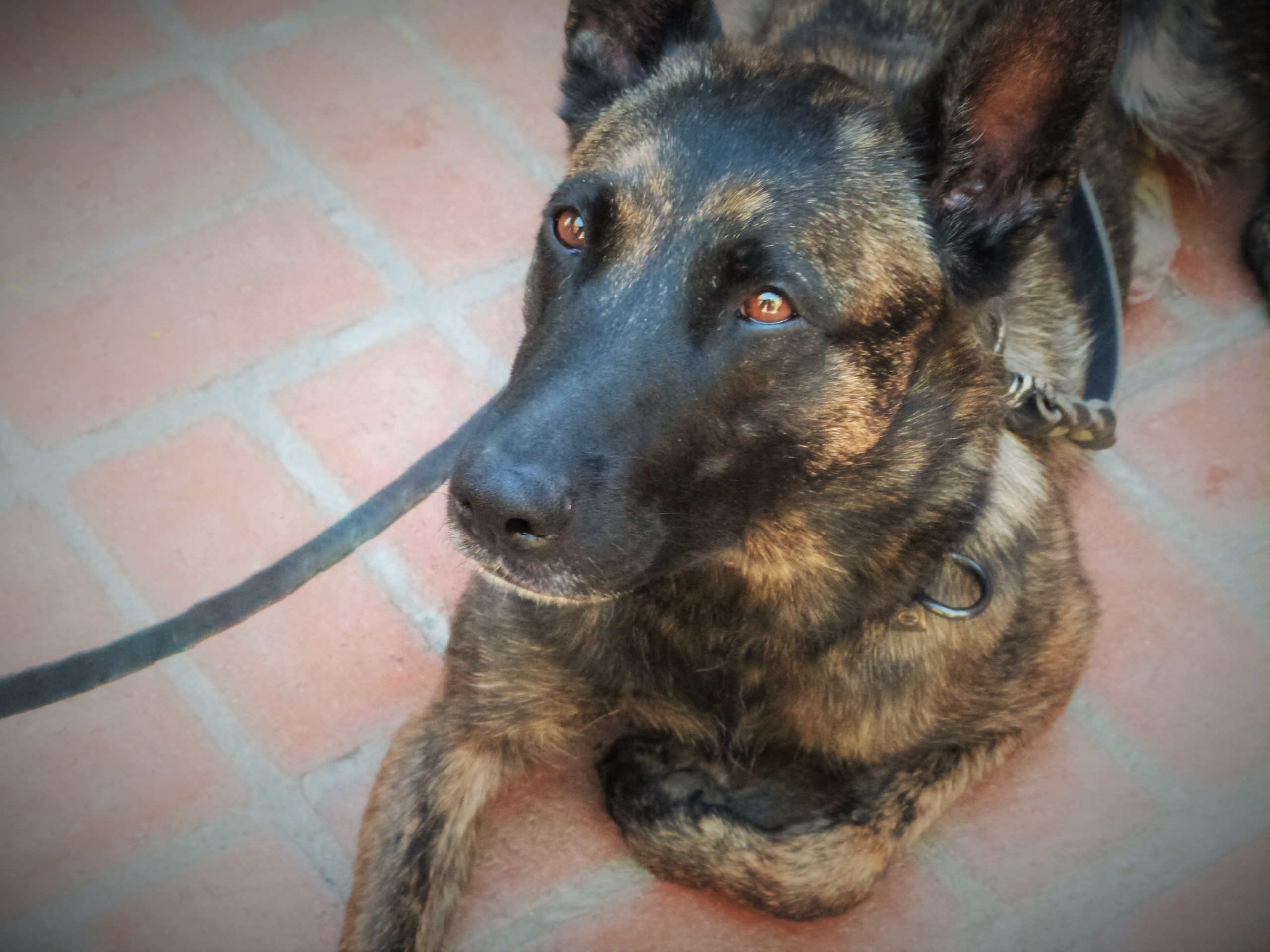 SOUTH PASADENA >> A man who kicked and violently swung his Chihuahua in the lobby of the South Pasadena Police Department two months ago while department cameras recorded pleaded “no contest” to an animal cruelty charge, authorities said. 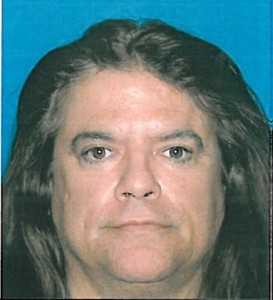 Christian Andrew Najera, 48, of Los Angeles pleaded “no contest” to a misdemeanor count of cruelty to an animal in the Los Angeles County Superior Court’s Alhambra branch, Los Angeles County district attorney’s officials said in a written statement.
Judge Rupa Goswami immediately sentenced Najera to 120 days in jail and three years of summary probation, officials said. He was also ordered to attend 24 animal cruelty classes and take part in a six-month residential treatment program through Assessment Intervention Resources.
“Furthermore, Najera cannot own, possess, maintain, reside with or care for an animal for five years,” according ti district attorney’s office spokeswoman Sarah Ardalani.
The case stems from a bizarre incident that unfolded about 10 a.m. on Feb. 6 at the Pasadena Police Department, 1422 Mission Street, Pasadena police and district attorney’s officials said.
Police department surveillance camera video shows Najera walking into the lobby of the department with his 2-year-old Chihuahua, Daisy, on a leash.
Station personnel watched on a live video feed as Najera kicked the tiny dog, and swung it violently by its leash, police said.
A police clerk and a dispatcher followed the abuser — later identified as Najera — until officers took him into custody, according to South Pasadena police Capt. Mike Neff. 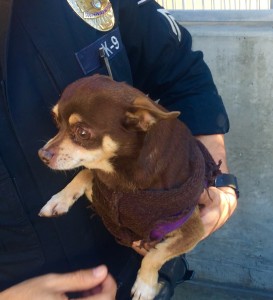 It was unclear why Najera, who is believed to suffer from psychological problems and has a criminal history including previous violent crimes, went to the police station in the first place, police said.
The dog was placed in the care of the Pasadena Humane Society & SPCA, police said. The injuries were not significant. 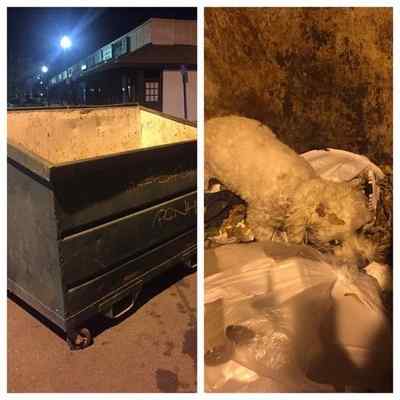 MONTEBELLO >> A small white dog pulled from a dumpster by Montebello police Tuesday night had to be euthanized after it was determined the animal had been badly wounded in an attack by a coyote or another dog, officials said.
Police found the dog Tuesday night, abandoned in a dumpster behind a business in the 600 block of West Whittier Boulevard, Montebello police Sgt. Marc Marty said.
“We were saddened that someone would do such a thing, but we were happy that we were able to rescue the dog,” police said in a written statement. “The dog appeared to be in good condition at the time and was taken by our partners at (the South East Area Animal Control Authority) to be cared for.
But upon calling SEAACA to check on the dog, police received sad news.
“We were extremely saddened to find out that after the dog was cleaned up several untreatable puncture wounds were located on his neck, possibly from a coyote or a dog,” according to the police statement. “Due to these wounds, the dog had to be humanly euthanized.”
Officials thanked community members who expressed concern for the dog and eagerness to adopt it, as well as their partner’s at SEAACA.
A listing of animals available for adoption is available online at www.seaaca.org. 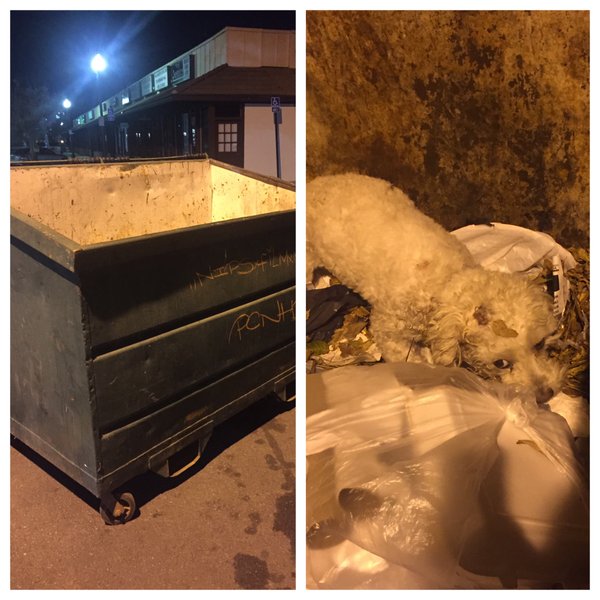 MONTEBELLO >> Police found and rescued a small white dog abandoned in a dumpster behind a Whittier Boulevard restaurant Tuesday night, officials said.
A tipster called police to report a possibly abandoned dog in a dumpster behind Alondra Hot Wings, 616 W. Whittier Blvd., Montebello Police Sgt. Marc Marty said.
“Officers found a small white dog in a large trash dumpster,” he said. “Officers rescued the dog which appeared to be unharmed and in good condition and turned the dog over to (South East Area Animal Control Authority).”
Police referred anyone interested in adopting the dog to SEACCA, at www.seaaca.org. 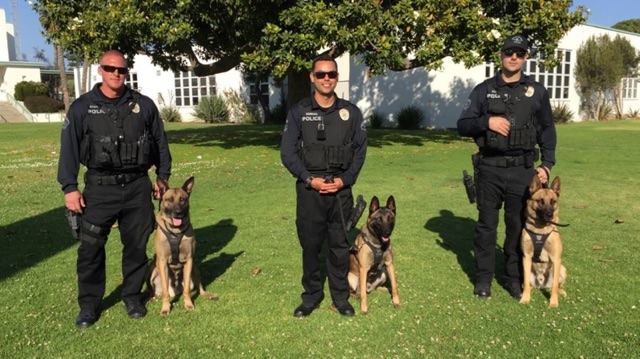 BAKERSFIELD >> All three of the West Covina’s Police Department’s K-9 teams brought back awards, including the “Top Dog Overall” award, in a statewide competition hosted by Bakersfield police over the weekend. 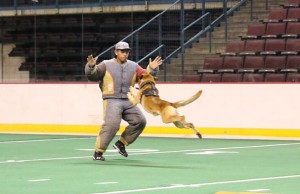 Officer Matt Bowman and K-9 partner Rec earned the Top Dog honor for the department, while Officer Bryan Rodriguez and Reiko won first place in patrol protection and Officer Jesse Miller and Rocky won fourth place in overall best, according to West Covina police spokesman Rudy Lopez.
“I am very proud of the professionalism our K-9 teams showed, the time and preparation they invested in training and their overall performance,” West Covina Police Chief Dave Faulkner said. “Their success is attributed to discipline and ongoing training within the unit.”
Forty-two police dog teams from throughout California competed in a series of 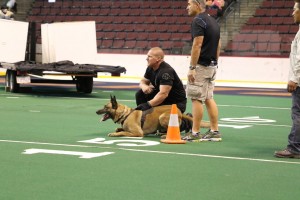 categories, including agility, obedience, searches, protection, narcotics detection and explosives detection, Lopez explained.
It was the West Covina Police Department’s first time joining the Bakersfield Police K-9 Trials, hosted by the Bakersfield Police Department, and they were up against much more experienced teams, Lopez said. Bowman has about eight months experience as a dog handler, while Miller has been a K-9 handler for about five months, and Rodriguez had been teamed with Reiko for 10 months. 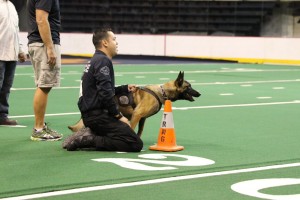 And Reiko has recovered from being shot while apprehending a murder suspect who was ultimately killed by police.
It’s not always certain how a police dog will react to such a trauma, Lopez said. Some become more timid after such an experience.
But as evidenced by his performance over the weekend, Lopez said, “This dog became an even sharper dog.”
The West Covina police K-9 program is supported by the Friends of the West Covina Police Department K-9s. For more information, visit www.friendsofwcpdk9s.org.
In addition to commending the winning K-9 teams, Faulkner thanks the organization for their past and continued support. 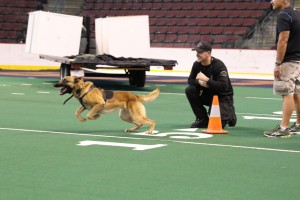 “I also want to recognize and thank the Friends of WCPD K9s nonprofit group for their continued support in assisting us in our pursuit of adding a 4th Police K-9 to the Department,” the chief said.
The annual Bakersfield Police K-9 Trials is open to the public, with proceeds benefitting the Bakersfield-based charity, the Society for Disabled Children.

EAST VALINDA >> A deputy fatally shot a put bull as it attacked and bit his partner in the unincorporated county area of East Valinda Friday, officials said.
The shooting took place shortly before noon as two deputies were investigating a report of domestic violence in the 500 block of Richburn Avenue, Los Angeles County sheriff’s Sgt. Nora Gutierrez said. Someone called deputies to report a boyfriend and girlfriend were involved in a fight in the backyard of a home.
No one responded at the home when deputies arrived, Gutierrez said. Based on the report of a possible domestic violence incident in progress, deputies made their way into the backyard to investigate.
A pit bull estimated to weigh 80 pounds attacked a female deputy in the yard, Gutierrez said. The deputy suffered a 2-inch cut to her forearm, as well as bruising all over her body.
Her partner opened fire on the dog, striking it three times, Gutierrez said. The dog died from its wounds.
The injuries deputy received treatment at a hospital, which released her Friday afternoon, the sergeant said.