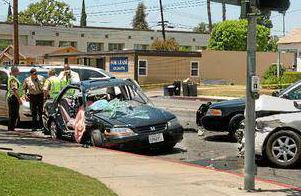 TEMPLE CITY >> A man received a sentence of more than 15 years in prison Friday for a car crash following a police pursuit in Temple City that killed his passenger, officials said.
Richard John Villareal Jr., 28, pleaded “no contest” in Pasadena Superior Court to one count of gross vehicular manslaughter and one count of evading a police officer, Los Angeles District Attorney’s Office spokesman Ricardo Santiago said.
Under a negotiated plea arrangement in Pasadena Superior Court, charges of murder, fleeing a police officer causing death, possession of methamphetamine, and driving without a valid license were dismissed, Santiago said.
Los Angeles Superior Court Judge Dorothy Shubin immediately sentenced Villareal to 15 years and 8 months in state prison.
Killed in the June 2 crash at Lower Azusa Road and Arden Drive in Temple City was Villareal’s 38-year-old friend, Michael Sandoval Jr.
“The defendant led Arcadia police officers on a high-speed pursuit after they attempted to pull him over for driving a stolen car near Workman and Baldwin avenues,” district attorney’s officials said in a written statement.
Arcadia police called off the chase, but Villareal continued speeding away in the 2001 Honda Accord.
“Following the pursuit, Villareal sped through a red light at the intersection of Lower Azusa Road and Arden Drive and was struck by another vehicle,” according to the statement. Following the initial impact with a Toyota Avalon, the Honda subsequently struck two minivans, officials said.
Sandoval died at the scene of the crash, while Villareal suffered moderate injuries and one driver of one of the other involved vehicles suffered minor injuries, officials said.
The car the two men were fleeing from police in had been reported stolen two days earlier in Monterey Park.