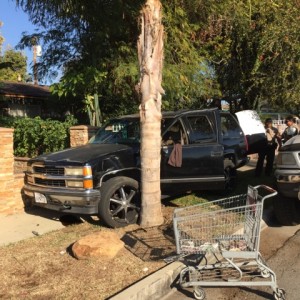 EAST VALINDA >> Deputies arrested a carjacking suspect after he led them on a chase, which ended in a crash in East Valinda Wednesday, authorities said.
The incident began shortly before 2 p.m. when deputies spotted a suspect wanted in connection with a carjacking driving in the unincorporated county area of East Valinda, according to Los Angeles County Sheriff’s officials. The SUV has been reported carjacked in Hawthorne, Lt. David Infante said.
“The suspect was considered armed and dangerous,” the lieutenant said.
Aided by a helicopter, deputies chased the SUV along surface streets for about 15 minutes before the driver crashed into a tree along McLaren Street, between Jellick Avenue and Trafalgate Avenue in East Valinda, and continued to flee on foot, officials said. 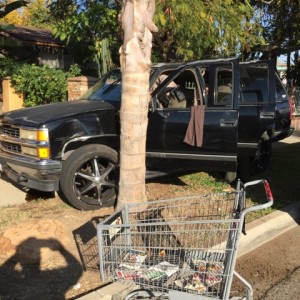 Deputies captured the suspect as he was pounding on or trying to kick in the door of a nearby home, Infante said. The home may have been that of a relative of the suspect.
The name of the suspect was not available Wednesday afternoon pending booking.