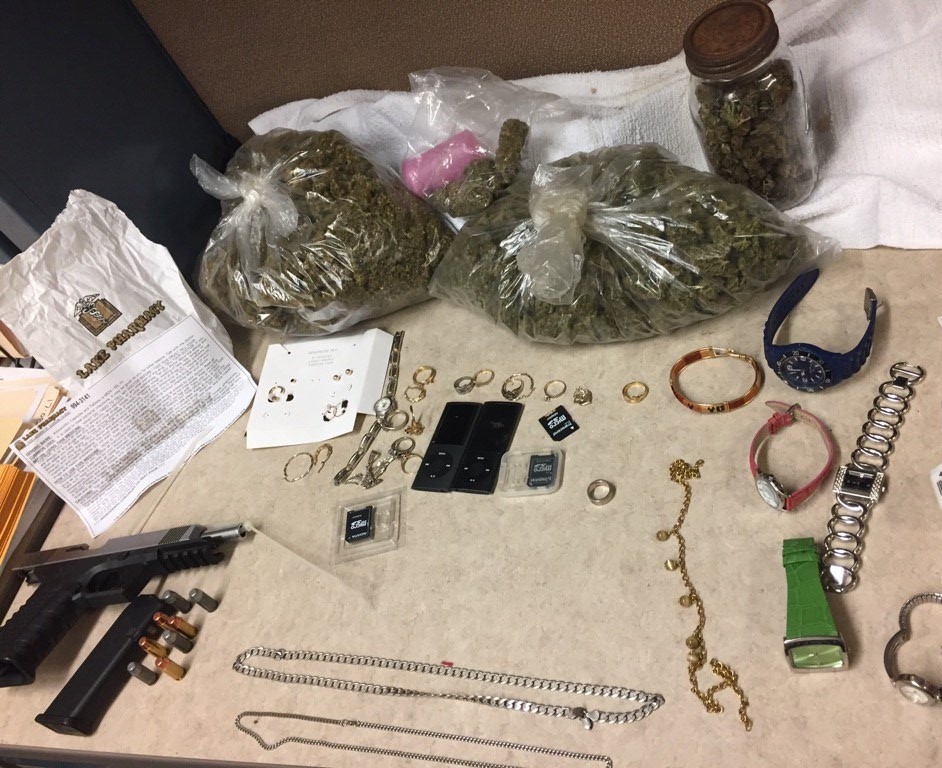 LA PUENTE >> Detectives arrested a man in La Puente who was being sought in connection with a home-invasion robbery and attempted murder in northern California, authorities said.
The arrest took place about 11 a.m. in the area of Main Street and Chatterton Avenue, Los Angeles County sheriff’s Capt. Tim Murakami said.
Detectives assigned to the Industry Station were notified by Clearlake Police Department investigators that a suspect in a home-invasion robbery and attempted murder case they were investigating was believed to be in La Puente, the captain said.
Officials conducted a stake-out at a home where the suspect was expected to visit, he said. They spotted the suspect and took him into custody without incident about 11 a.m.
Inside a bag carried by the suspect was a handgun believed to have been used in the Clearlake crime, as well as items believed to have been stolen, including two bags and a jar filled with marijuana, Murakami said.
The suspect was being held on a warrant and was expected to be sent back to Lake County to face charges, the captain added. His identity was not available Friday.
Representatives of the Clearlake Police Department, a 21-officer department serving a community of about 15,000 people, were not available to discuss the crime in their jurisdiction.
Clearlake police are investigating the shooting of a woman that took place at a home on Thursday, according to a statement issued on the department’s Facebook page.
Few details were released regarding the shooting, and officials said on Friday that they could not confirm whether that was the crime for which the suspect arrested Friday in La Puente was being sought.
No further details were available.

WEST WHITTIER >> Deputies are seeking three men with an assault rifle who carried out a home-invasion robberies in West Whittier and Cerritos on Wednesday night, officials said.
The first crime was reported about 9:40 p.m. in the 12100 block of Washington Boulevard, at the home of a man and woman in their 60s in the unincorporated county area of West Whittier, Los Angeles County sheriff’s Lt. Steve Tenney said.
“The female victim walked out of her home a little after 9 p.m. to retrieve an item from her vehicle parked in her driveway when she was confronted by a male black adult armed with a rifle,” sheriff’s officials said in a written statement.
“The man ordered her back into the house at gunpoint and followed her inside,” according to the statement. “Once inside the home, the suspect ordered both elderly victims to lay on the floor. Two additional male black suspects entered the home and ransacked the rooms, stealing items of jewelry.”
The robbers ordered the victims to stand up and walk into another room before robbing them of their cash and fleeing, officials said.
No getaway car was seen.
Investigators described all three robbers as black men, between 25 and 30 years old, about 5 feet 10 inches tall and of thin build. Each wore a hooded sweatshirt with the hood pulled up over their heads.
“They were in and out,” he said. The man and wife suffered no injuries, though they were, “pretty shaken up.”
Deputies noted no apparent reason the robbers would have targeted the couple.
A short time later, three men of similar description carried out a similar crime about nine miles to the south, authorities said.
“Two hours later, Cerritos Sheriff Station responded to a similar home invasion robbery involving three male black suspects, one armed with a rifle,” according to the statement.
The crime was first reported as an “assault with a deadly weapon” about 11 p.m. in the 4600 block of Rancho Verde Drive, sheriff’s Lt. Richard Hernandez said.
A man who lives at the home was working inside his garage when one of three robbers approached, sheriff’s officials said in a written statement.
“The victim was pistol-whipped on his head and ordered to the ground as the two other suspects entered his residence,” the statement said.
The robbers then confronted a woman inside the home and also ordered her to the ground. Two children were also sleeping inside the home.
“The two suspects began to walk towards the rear of the residence when they abruptly turned and ran out the front door out of view,” according to the statement.
Nothing was stolen during the crime, and no injuries were reported.
The three suspects were described as black men in their 20s, officials said. One was armed with a rifle, and the other two carried handguns.
“These men are considered armed and dangerous,” the statement added.
Anyone with information can reach the sheriff’s Pico Rivera Station at 562-949-2421, or the sheriff’s Cerritos Station at 562-860-0044. Tips may also be submitted anonymously online to L.A. Regional Crime Stoppers at 800-222-8477.

ROWLAND HEIGHTS >> Two men with handguns tied up a man and woman during a home-invasion robbery in Rowland Heights late Wednesday, authorities said.
The crime unfolded about 9 p.m. in the 19200 block of Addis Street, Los Angeles County sheriff’s Lt. John Saleeby said.
A man and woman in their 20s answered a knock at their front door when the gunmen forced their way in, the lieutenant said.
Both robbers were armed with handguns as they tied up the two victims, he said.
The robbers stole a bag containing an undetermined amount of cash, as well as other items from the home, Saleeby said.
Sheriff’s officials described the gunmen as two Asian men wearing all black clothing.
Sheriff’s radio traffic from the scene further described one of the robbers as being in his early-20s, about 6 feet tall and 180 pounds, wearing a black silk jacket. The second robber was described as 5 feet 5 inches tall and 160 pounds, wearing a white T-shirt. No getaway car was seen.
The victims suffered no significant injuries, Saleeby said.
Anyone with information can reach the sheriff’s Walnut-Diamond Bar Station at 909-595-2264. Tips may also be submitted anonymously to L.A. Regional Crime Stoppers at 800-222-8477.

COVINA >> A home burglary turned into a home-invasion robbery after two brothers interrupted two intruders inside their Covina home late Wednesday, police said.
The crime unfolded about 7:30 p.m. in the 800 block of North Citrus Avenue, Covina police Lt. Dave Foster said.
A man was asleep in his home when he was awakened by a noise in another room and went to investigate, the lieutenant said.
Two intruders confronted the man and ordered him into another bedroom, which was unoccupied, he said.
One of the robbers brandished a knife and demanded money from the man, Foster said. As the confrontation continued, the man’s adult brother arrived home and interrupted the crime.
The brother was also ordered into the bedroom and ordered to lie down, Foster said.
The robbers grabbed a jewelry box, containing about $400 worth of valuables, and fled from the home.
The victims, described as men in their late-20s and late-30s, suffered no injuries, Foster said.
Officials described the robbers as two black men, both of thin build. One was in his early-20s, stood 5 feet 11 inches tall and wore all-black clothing. The other robber was in his early-30s and wore all-dark clothing.
Anyone with information is asked to contact Covina police at 626-384-5595. Tips may also be submitted anonymously to L.A. Regional Crime Stoppers at 800-222-8477.

DUARTE >> Three masked attackers beat a man and his wife during a home invasion at the northern edge of Duarte Friday, authorities said.
One of the attackers tried, but failed, to carjack a woman while fleeing from the scene of the 1 p.m. home-invasion on Spinks Canyon Road, at Rim Road, Los Angeles County sheriff’s Lt. Ismael Chavez said.
The husband and wife, both in their 50s, suffered injuries not believed to be major, including swelling, abrasions and bruising to their heads and faces, the lieutenant said.
The man was standing in front of the home when he was first confronted by one of the masked criminals and attacked, Chavez said. After being beaten up, the man managed to go to a neighbor’s house to seek help.
Meanwhile, the two additional robbers made their way to the home’s front door.
“They force their way in and start beating her up,” Chavez said. “She was able to flee to a neighbor’s house.”
It was unclear what, if anything, was stolen from the couple’s home as the investigation continued late Friday.
Three male suspects, all black wearing hooded sweat shirts, black masks and black gloves, carried out the crime, he said.
Two of the men fled the area in a silver Range Rover SUV, last seen driving south along Spinks Canyon Road, Chavez said.
The third suspect was left behind by his partners in crime, Chavez said. He tried to carjack a woman near the scene of the home-invasion, but the woman was able to drive away. The third suspect was last seen on foot.
Detectives had found no obvious reason late Friday why the robbers would target the couple, Chavez said.
Anyone with information can reach the sheriff’s Temple Station at 626-285-7171. Tips may also be submitted anonymously to L.A. Regional Crime Stoppers at 800-222-8477.

SAN GABRIEL >> Police are seeking two men who attacked a man and woman during a home invasion in San Gabriel late Monday.
Police first received a 911 call about 9 p.m. from a man reporting he had been shot by intruders at his home in the 100 block of West Chestnut Avenue, San Gabriel Police officials said.
Officers arrived to find a 43-year-old man and a 39-year-old woman suffering from “serious head injuries,” Lt. Antonio Hernandez said in a written statement.
“Neither victim sustained life threatening injuries, nor do their injuries appear to be gunshot wounds,” Hernandez said. Both were taken to a hospital for treatment.
Investigators determined that two men had knocked at the front door, then forced their way in when the woman answered, “in an apparent home-invasion robbery,” the lieutenant said.
“While in the home, the suspects forced the female victim who opened the door to the floor at gun point and then struck her on the head with the gun,” he said.
The woman screamed, and the man confronted the intruders.
“A struggle ensued and during the struggle, the male victim heard what he believed to be three gunshots,” Hernandez said.
The two attackers fled from the home. It was not initially clear whether anything had been stolen.
Two additional roommates who were home during the home-invasion — A 36-year-old woman and a 31-year-old woman — were unhurt, Sgt. Rene Lopez said.
Exactly how the male victim was injured had not been determined early Tuesday, he added.
Police described the attackers as two Asian men, one heavy-set and the other of thin build. One of them was armed with a small-caliber handgun. It was unclear whether a getaway car was involved.
Anyone with information is asked to contact San Gabriel police at 626 308-2828. Tips may also be submitted anonymously via L.A. Regional Crime Stoppers at 800-222-8477.

ROWLAND HEIGHTS >> A man armed with a knife barged into a Rowland Heights home and robbed a resident of a small amount of money and marijuana late Wednesday, officials said.
The crime was reported about 10 p.m. at a home in the 17900 block of Calle Los Arboles, Los Angeles County sheriff’s Lt. John Saleeby said.
A man in his 20s has been in contact with the robber via social media prior to the incident, Saleeby said.
The robber arrived with a knife and demanded money from the victim, ultimately fleeing with less than $50 and a “small amount” of marijuana, the lieutenant said.
He was last seen getting into a green Toyota pickup truck with a long-haired driver waiting at the wheel, Saleeby said.